Wood is the oldest material known to humans. Michael Somers, Forestry Advisor takes us on a journey through the heritage of wood from the 7th Century to the present day. He outlines it's varied and interesting uses which are steeped in tradition and culture.

Wood is the oldest material known to humans. Ireland is no different to any other country in how we use wood. As far back as the 7th century, the Brehon Laws had Acts about wood uses. One in particular stated that 17 sticks were to be made available nightly to older people for their fires. Since those ancient times, wood has been used for many tasks from furniture making to coffin making to making farming implements to defying the crown. Irish wood has been used to entertain the masses, build homes, and has roofed halls of power. Today, wood is used daily in every home in the country.

Our wood heritage can be seen in bizarre places. One of the least likely places many Irish people would dream of finding Irish wood heritage is in the British Royal family. But it's there. It's the first thing to be seen when the Queen opens parliament as she approaches Westminster in her coach. The coach was made in Dublin by John Hutton and Sons in 1851. John Hutton was one of the most innovative coach builders in the world. His business was on Great Britain Street (Parnell Street), which used mostly Irish wood crafted by Irish tradespeople. In 2011 as Queen Elizabeth laid a wreath at the Garden of Remembrance, she was only footsteps away from the very place where her most prized coach was crafted.

John Hutton's carriages and carts were magnificent pieces of ingenuity and craftsmanship. Each piece of wood had a specific purpose. Elm was used in the centre, ash for the spokes, and oak on the rims. Today, old forge sites are often identified by the surrounding elm trees. Indeed even the most basic carts and carriages had the same construction principles as Hutton's masterpieces. And these carts fed into the traditions of many places. 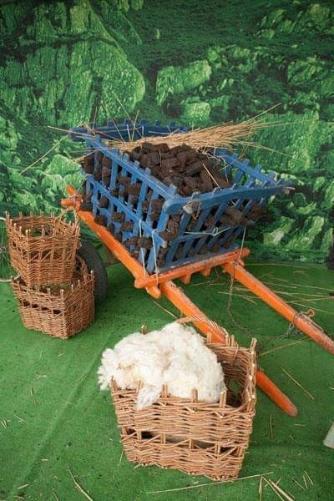 Cart dancing was popular throughout the drumlin hills of Co. Leitrim. It’s an infectious timbre, sole leather hitting off deal timber. In other parts of the country, dancing boards were common. People would gather to dance and congregate with their neighbours telling stories and singing songs.  At the original dancing at the crossroads wood was the centre piece, as couples danced and stories spun. Pipes and fiddles played jigs and reels. Fiddles themselves come from the non-native sycamore tree. Even today, the most valuable sycamores are used for musical instruments.

The heritage of wood traversed from the music into Ireland's literary heritage. In 1885 WB Yeats wrote his poem "Down by the Salley Gardens".

Down by the salley gardens my love and I did meet;

She passed the sally gardens with little snow-white feet.

She bid me take love easy, as the leaves grow on the tree;

But I, being young and foolish, with her would not agree.

Yeats poem would later be married with music to create one of our classic folk songs.  But the practical importance of salley gardens was not eloquently versed by poets. They were managed in general on the coppice system predominately for basket making.

Basket making is one of the oldest crafts globally and the most widespread of any craft. In Ireland, baskets were used in agricultural and seaside communities for many chores, from carrying fuel or food to catching eels or seafood. There are still quite a few basket weavers in Ireland who make some of their living from basket making. There are many regional variations in basket design. 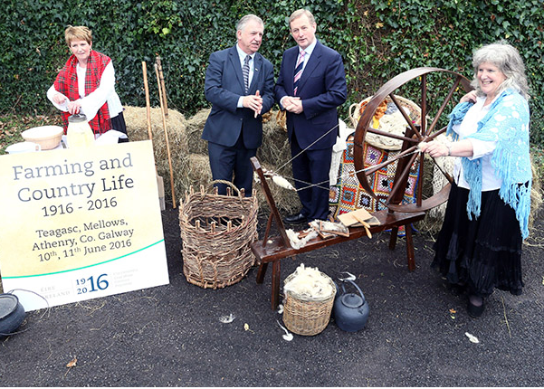 Photo from launch of the Farming and Country Life 1916-2016 Event: An Taoiseach at the time, Enda Kenny TD with Professor Gerry Boyle, Teagasc Director. Also pictured is Carmel Kelly, who was busy churning butter and Patricia Kirwan Doyle from the Connemara Heritage Network spinning wool on a Spinning Wheel courtesy of Leenane Sheep and Wool Centre. Farming and County Life 1916-2016, sought to commemorate the 1916 Rising and reflect on developments in farming and country life across Ireland over the last century. Held on Friday, 10th & 11th June 2016.

Sally sticks were also cut for the old Irish game of Catty. This game was played predominately in the southeast of Ireland. Catty became a forerunner of rounder’s, baseball and possibly cricket. The sally is officially recognised as the first cricket bat recorded in the museum at Lord's, the home of modern-day cricket.

By 1882, cricket was the most popular sport in Ireland. So much so, our own native game of hurling was almost extinct. But Michael Cusack, a cricketer from County Clare, had a vision. He founded the GAA with 14 other men in Hayes hotel Thurles, Co. Tipperary in November 1884. Hurling was the most ancient game in Ireland. The hurl itself was made from the ash tree—the most sacred tree in old Ireland. Over the following century hurling regained its prominence. Today, it's the fastest-growing sport in Ireland.

But ash was not just used for hurley making.  Tool handles to work the land, the docks and the mines were predominately made of ash. In the production of textile looms and spinning wheels were all made of ash. Other woods are now in their own rights being used in the production of fabric. Wood technology is continually changing, and how we see timber and use it is always evolving. 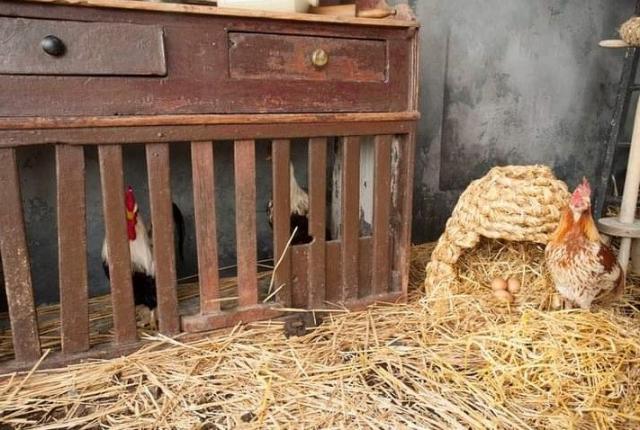 The legacy of Oak

Ash was not the only noble wood in ancient Ireland. Oak dominated many parts. It has a legacy through the Irish language. Counties like Derry and Kildare are called after this majestic tree. Its uses are wide ranging and varied. In today's Ireland, we see its use  in food markets and in distilleries and brewing.  Food ingredients, flavourings and fermentation are many evolving markets for oak which hopefully will create a valuable heritage for future generations.

Coopering (barrel making) was the noblest of professions. The trade fell to modern progress. But the circle is now turning, and that progress of times past in itself is now becoming a distant memory. As Irish distilleries embrace our oak for fermenting new whiskey brands, coopering is returning as a trade.

In today's world, wood is not as visible as in the past. But the humble spruce is used to roof our houses. Indeed the last 12 months have seen many reconnect with woodland through various recreation forms. We are currently writing our own chapter in history. Many years from now, future generations will consider many of our decisions. Just as we examine previous generations. As tomorrow comes, the uses for wood and wood-based products will grow.

Will the next folk legend sing about the woods of Aghadoe, in a style similar to Liam Clancy's unique style, on a guitar crafted from a Sitka spruce or will the next big designer clothing label use wood textile or can our food and beverage sector embrace outputs from our new broadleaf crops? We are currently writing Irish heritages next chapter. 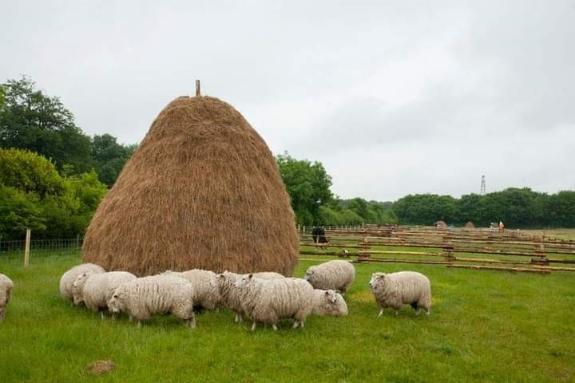