There is evidence of woodland in Cavan stretching back to ancient times. Today the remains of an old forest can be seen at Corratinner Lake, near Virginia. Kevin O'Connell, Teagasc Forestry Development Officer takes us back through historical records of the woodlands of Cavan up to the present day

There is evidence of woodland in Cavan stretching back to ancient times. Lieutenant P. Taylor in his statistical report on the parish of Drumgoon in 1836 reports that: “the recent drainage of Killyure lake has exposed and rendered available a considerable extent of bog studded with stumps of oaks, fir (Scots pine), holly and sally. On the northern shore of the lake 70 stumps mostly fir many which measure 9 feet in circumference, now rise above the surface and on its south-western margins a more extensive development principally of oak has also been effected”(Day & McWilliams 1998).   Today the remains of an old forest can be seen at Corratinner Lake, near Virginia.  Sir Charles Coote in his 1802 statistical survey of the county observed, “The woods of Cavan were formerly very considerable and at the time of uncommon size, which argues that the soil is favourable to plantation.  Immense trees are found in bogs, much greater that I have seen elsewhere”.

Relatively large areas of woodland still existed prior to the plantation of Ulster in 1612.  In the extreme west, the Shannon valley was wooded where the river enters Lough Allen and also was the southern shore of Upper Lough Macnean and the valley of the Swanlinbar.  From the border north of Belturbet, woods stretched at least to Ballinagh.  The northern and eastern shores of Lough Sheelin and around Kingscourt carried timber.  South of Cootehill, were woods of oak birch and alder.  Of the broadleaved trees, oak was by far the most widespread.  Ash was less common except where limestone was sufficiently near the surface to give a calcareous soil.  Alder was abundant where the water table was high and hazel was frequently associated with oak.  The only other common species were birch, holly, yew and juniper (McCracken 1971).

The Effects of Historical Events

Three events in the history of the county despoiled the landscape and destroyed much of the natural vegetation, the seventeen and eighteenth century ironworking, population increased coupled with intensive agriculture and finally famine and emigration in 1845-’47 (Reilly 2001).

In the seventeenth and eighteenth century the presence of iron ore deposits at Arvagh and Swanlinbar, led to the woodlands in the area being felled to produce charcoal for smelting.  Lewis in his topographical dictionary of Ireland in 1846 refers to Swanlinbar; "the town is supposed to have derived its origin from a rich iron mine in the neighbouring mountains of Cuilcagh, which was worked at a remote period to a very considerable extent.  These works continued until all the timber on the mountains was consumed in smelting the ore, when they were necessarily abandoned”.  In some maps the range of hills beside the Cuilcagh Mountains are referred to as the Iron Mountains.  Coote (1802) wrote of the same area; “the surrounding scenery is only destitute of timber to complete the landscape; the woods have been long since cut down to supply the furnaces at Swanlinbar …”

The increase in population and the extensive farming on small holdings in the late eighteenth and the early nineteenth century led to further woodland losses.  The need for wood as a fuel and for building also led to pressure being put on the remaining woodlands.  In 1836, Taylor the parish surveyor in Drung wrote “the very great scarcity of fuel which has long prevailed in the parish, has led to the extermination of every remnant of natural wood upon its surface”. He also reported “The faintest trace of natural wood nowhere exists within the parish, every vestige has been removed except around gentlemen’s seat” (Day & McWilliams 1998).  Another observer noted “… many demesnes are now well planted, and give a wood appearance to the county, but excepting the vicinity of gentlemen’s seats, very little shelter is to be found” (Coote 1802)

The Dublin Society (later the Royal Dublin Society) was formed in 1731 to promote and encourage industrial and agricultural initiative.  Grants were made available for the planting of trees. Between 1766 and 1806, 25,000,000 trees were planted due to the encouragement of the Society, which paid ₤90,000 in awards and medals (Neeson, 1991).  Sir Charles Coote mentions from his survey, nine plantations of about 106 acres in respect of which premium has been awarded between the years 1789 and 1794 and with the exception of a ‘Danish Fort’ which had been planted by Mr John Piers, they are all spoken of as in good preservation (Neeson, 1991).  In 1841, 6,800 acres and 327,000 hedgerow trees were planted in Cavan (Reilly, 1997).

Records survive of commercial tree planting during the period 1820-1845 in the Bective Estate around Lough Ramor in Virginia.  The following tree species were planted and were also sold in the estate nursery;  alder, ash, balsam poplar, beech, box, Canadian poplar, horse chestnut, Spanish chestnut, laurel, elm, hazel, holly, laburnum, larch, oak, poplar, Portuguese laurel, sycamore, thorn, willows and yew (Reilly, 1997). These are also the main tree species recorded by the parish surveyors in a number of Demesnes around the county.

The surveyor of Drumloman parish, Lieutenant A. Betty in 1835 noted the amount of trees around the residences of the better class of farmers. He reported that;” Lord Farnham encourages it very much, giving the tenants the trees gratis and charging them for the ground on which they plant, allowing them to cut down the trees when they are old enough and serviceable” (Day & McWilliams 1998).

The following is an account of early State forestry in County Cavan: “Land was acquired at Bailieborough Castle Demesne in 1911.  The old woods contained oak, silver fir, beech, larch and Scots pine.  These were cleared and Norway and Sitka spruce, Douglas fir, Scots pine, European larch and Western red cedar were planted.  The Scots pine and European larch were found to be unsuitable and were replaced by Norway spruce.

At Lough Ramor, Virginia, some of the original oaks were retained and oak groups were planted through a matrix of Norway spruce, Scots pine and European larch.  The Cootehill state forestry commenced with the Bellamount property about 1935 and was extended later by the Dartrey estate on the other side of the Town Lough which they adjoin.  Both were noted for the high quality of their oak, 50 feet branch free stems were not uncommon and long lengths for special purposes were exported to England.  Most of the ground has been turned over to conifers, Norway spruce predominating with lesser amounts of Sitka spruce and Scots pine.

Forests have been planted by the lake near Killeshandra and Belturbet and in other locations along the shore of Lough Oughter and at Castle Saunderson.  In the western part of the county, forests have been planted on Cuilcagh and at Swanlinbar” (Fitzpatrick, 1965). Remnants of oak in groups planted through a matrix of Norway spruce can also be found in Castle Saunderson. 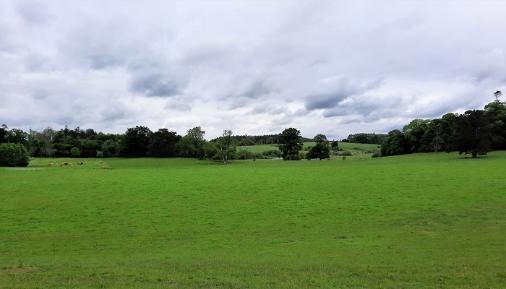 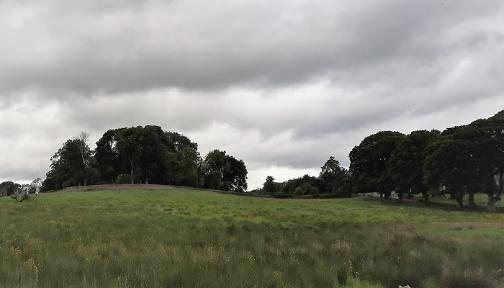 Photo above: Woodland at Danesfort, Kilmore 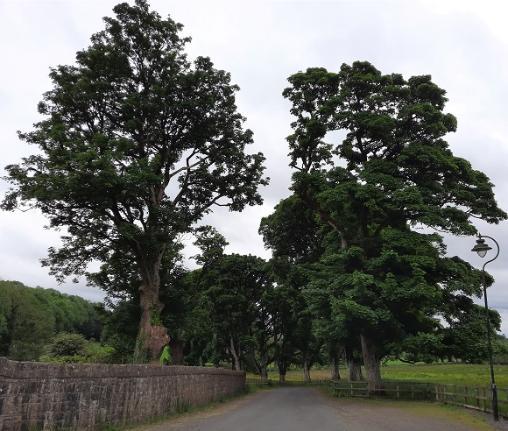