What is a GPS Fertiliser Spreader?


With the grant on GPS fertiliser spreaders now available to all TAMS applicants there is a lot of interest from farmers in making an investment in the new equipment. Francis Quigley, Teagasc Farm Machinery Specialist explains that a GPS controlled spreader is more than just a guidance system 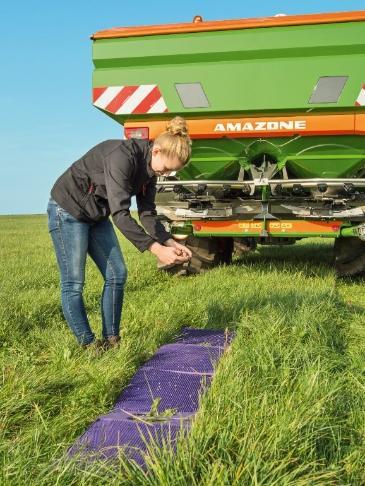 There is some confusion about what a GPS controlled fertiliser spreader is. Some farmers think it is a guidance system which helps the operator to maintain the correct working width, however a GPS controlled spreader has a lot more going on. It is important to understand the basics of fertiliser calibration to better understand what these high tech machines are doing.

In order to accurately spread fertiliser with any machine calibration is a critical step. Calibration involves calculating the correct amount of fertiliser dropping from the hopper onto the disc in a minute and then checking against the actual flow from the machine. Calibration involves some maths, a stopwatch and a bucket. You need to know the application rate, forward speed and working width.  The formula below shows how to calculate the desired flow rate.

Then we need to check the spreader output matches this rate. This is done by placing the bucket under the machine while static in the yard, running the machine for a minute collecting and weighting the fertiliser in the bucket. The amount of fertiliser collected should be the same as the flow rate from our formula, if not adjust the shutter opening and calibrate again.

This is an accurate method of calibrating the flow rate however it still leaves a lot of pressure on the operator. He needs to drive at the set forward speed and maintains the set working width at all times or the calculations in the formula were for nothing. The tractors forward speed can also be calibrated manually using a stop watch a tape measure. Maintaining an accurate working width is not always as easy especially with wider working widths, a basic GPS guidance system is a very valuable aid to getting this right and something for all farmers to consider investing in.

Carrying out the calibration takes time and effort, and it is important to do it at least once per year, but remember it will need to be done with each fertiliser type that you use and at each application rate you intend to use.

So how will a GPS controlled spreader help?

There is a range of technology on the GPS controlled spreader which takes care of the calibration and flow rate adjustment for the operator. The fertiliser spreader (in most cases) is fitted with weight cells on the hopper, these work the same as on a diet feeder and can measure the weight of fertiliser inside the machine. A set of electronic rams adjust the shutter openings at the bottom of the hopper.  The control box in cab allows you to input your application rate, and your desired working width. The GPS system picks up the forward speed of the tractor and with all this information combined the machine can automatically calculate the desired flow rate. The machine will then measure the actual flow rate by weighing the amount of fertiliser which has left the hopper over a set period of time and it will automatically adjust the shutters at the bottom of the hopper to maintain the required rate. It is constantly rechecking the calculation and re calibrating the spreader. If the forward speed increases it will increase the flow rate, if speed decreases it will decrease the flow rate and so on. No need for a bucket and stopwatch any more.

Another major advantage of the GPS spreader is that it will automatically turn on and off the flow of fertiliser at the headland. This is an area where a lot of savings can be made. This feature is actually a bigger advantage to grassland farmers than tillage farmers as their fields tend to be smaller and so they are meeting a headland a lot more often than a tillage operator will. Based on feedback from operators who have used these spreaders they all report that the GPS spreader was opening the spreader much later than they would have done with a manual spreader entering each bout. This is because we all tend to forget that when spreading for example an 18m bout width the machine is also throwing fertiliser upto 18m behind the spreader, and a full rate has been applied to 9m in the first round of the field. In most case we don’t tend to allow for this and we turn on the machine much earlier than needed. The GPS controlled spreader takes this decision off the operator and some farmers report they are saving as much as 10% of their fertiliser use by this step alone. (Note:- For those without a GPS spreader, getting a GPS guidance unit with a headland warning system that alerts you when you’re in the correct distance to turn on the spreader will achieve the same result).

Maintaining an accurate working width in each run is still important, you will have the help of the GPS guidance system to make this easier. The spreader will also give savings on the last run. As you approach the headland the last remaining run is almost always going to be narrower than the working width you’re using. On the entry level GPS spreader they will close the down the shutter on the side of the machine closet to the headland reducing the rate to match this remaining area. It’s important to realise that in most cases an entry level GPS machine will still be throwing the fertiliser the same distance as it is the rest of the field, so it is not the same as turning off sections on a sprayer.

Technology to cut down the working width with sections like on a sprayer is possible but in most cases this is only available on the high end GPS spreaders which have a lot more technology and are considerably more expensive.

There are still manual adjustments which will need to be made to the spreader for different fertiliser types and working widths. These vary depending on the machine but will include items such as setting the vane angle or adjustment of the drop point. The settings adjustments are available from the phone app for your spreader.

The spreader will still need to be well maintained and in field tray testing is as important as it is with any type of spreader. The electronics have no idea what is happening the fertiliser once it has left the hopper. If you have worn or damaged vanes, incorrect vane settings, wrong disc speed, the machine will still apply the same rate but the fertiliser might not be thrown to where it’s needed.

These spreaders are expensive pieces of equipment with complex electronics and will need proper care and maintenance, ensuring the machine is well washed after use, serviced regularly and stored indoors is important if you want to get many years of accurate service from the machine. Updates on GPS units and control boxes may also be needed from time to time. It is also worth checking to see how easily the spreader can be moved from one tractor to another, with all of the equipment needed on the tractor this is not always a simple task.

It is possible to buy the GPS system and spreader separately, the DAFM will accept separate invoices for each and there advantages to having a separate GPS unit which can be used for other jobs and other machines. So shop around for the best deal. Just make sure that the GPS unit you are buying will communicate with the spreader your buying, there may be extra software updates or cables/boxes needed.

The full list of machines which are covered by the grant can be found on the Department of Agriculture, Food & the Marine website here, and is covered in specification S.195 Accepted GPS controlled Fertilizer spreaders. The rate of grant aid depends on the hopper capacity. Using the formula y=1.06x+17600, a 3000lt capacity fully GPS controlled spreader will be valued at €20,780. A 40% rate of grant allowance will amount to €8,312, so the machine is costing the farmer approximately €12,500. The famer can use his existing machine as a trade-in against the cost of the new machine.

For more on the topic of fertiliser spreading read Spread Accurately and Evenly  (by Dermot Forristal, Teagasc Oakpark)