As Irish eyes turned to Tokyo for the Olympics this summer, Pat Fitzgerald director of Fitzgerald Nurseries and Beotanics discusses his winning mix in Japan with Dónall Flanagan nursery stock/ornamentals Specialised Advisor, Teagasc

Pat Fitzgerald has developed a Japanese Carex into a globally recognised plant and branded under the EverColor trademark on 4 continents, selling in garden centres worldwide. In conversation with Dónall Flanagan, Pat described his journey from Stoneyford in Co. Kilkenny to Utogi in the mountains of Japan.

In 1989 before setting up the nursery, Pat acquired some Japanese sedges – Carex oshimensis Evergold, as a birthday present from his wife Noirín. This variety had been sold by Duncan and Davis in New Zealand and was not under breeders rights protection. Carex oshimensis is native to Oshima island in Japan. It is an evergreen, mound forming sedge with strong resilience to cold and drought conditions. Pat began breeding work with the Carex in Stoneyford and in the lab in Enniscorthy. The lab is FitzGerald Nurseries and sister company Beotanics micropropagation R&D and production laboratory where new plants are multiplied in vitro as well as undertaking breeding and selection programmes there.

The plants were launched at the international trade fair for plants (IPM) Essen in 2008 and they caused a bit of a stir. Carex has a niche trailing characteristic in containerised plant displays that require plants that have “thriller, filler and spiller” characteristics. The Carex Evercolor range was launched and immediately was spotted by a Japanese plant breeder agent Satoki Matsui of Plant Network. Pat was invited to visit Japan by Mr Matsui in 2010. This was Pat’s first of more than six visits. He commented, “Japan is one of my favourite places to visit and my favourite in terms of diversity of plant based foods. There is such a strong emphasis on quality of produce and respect for the small artisan producer.”

It was on one of these early visits that Pat became aware of the cultural importance of the Wasabi plant. The vegetable is prepared for sale by hand by the farmer and their families, it is treated with the same high regard as a special fruit. Soon Matsui was arranging for Pat to visit plant breeders and growers  including wasabi breeders. Pat recalled, “we would make two visits a day, and they would take the whole day. There is a strict but respectfully friendly protocol and ritual in making the visits and there was great respect shown to us for taking time to visit because of our interest in their crops”. He went on to say that visits always followed the format of sharing small gifts, taking traditional tea, a long meeting of about three hours and finishing with a meal or snacks, commenting ruefully,  “you have to take your shoes off every time you go into your host’s home so I soon realised my lace up boots were all wrong for Japan”.

In 2012, Pat also noticed the Japanese obsession with sweet potato, baked and sold as street food. Beniazuma is the variety known to all, like our rooster.

Pat made a number of visits over 2018 and 2019 specifically working on developing wasabi production in Ireland. (Pat is pictured belowwith wasabi) Pat noted, “we are working with a wasabi breeder who is an eleventh generation wasabi farmer. He has visited Ireland and the UK with me also, to develop a 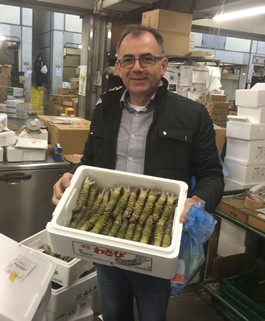 grower network. We are sharing genetics and selecting seeds that will suit the Irish climate and other parts of Europe also”. This grower and many more are situated in Utogi in the Shizuoka prefecture nestled in the mountains, considered the birthplace of wasabi. Pat went on to say, “wasabi is grown with water from cool mountain springs as it needs a lot of water and grows best in temperatures of between 7 to 18oC. The Irish climate is ideal for wasabi but it needs shading between June and August.”

Ireland has benefits for pest and disease of these plants also, as Pat pointed out “As an island with a temperate climate, compared to subtropical areas of Japan. We have very few pests that are troublesome to carex, sweet potato and wasabi. Aphid is probably the only issue here”. This has allowed the nursery to develop a successful market, exporting “basic certified material” of the highest plant health status for export across the world. The range of sweet potatoes produced by the nursery includes some from Japan and Louisiana State University. The export market for these is mostly to Europe and Africa.

With the Olympics taking place, there have been substantial orders for Carex for use in public landscaping. Its use as a functional, ornamental plant has a great benefit where site lines, security and minimized “cover for ill intent” are paramount. Carex Evercolor range is widely used throughout Japan and is produced there under licence. There are now ten distinct, robust varieties in the Evercolor range, with Plant Breeders Rights established across the world. Nandia Obsessed is very popular in Japan also, this is produced in Stoneyford and shipped to Japan as young plant material.

The next phase in the journey will be to maximise the health benefits of these plants. Beotanics, a sister company of FitzGerald’s Nurseries, is developing powders and of wasabi and syrups and flours of other tubers which  have high levels of anti-inflammatory properties. Pat concludes “Japanese people are understated but highly professional. Japan is a very important country for us as a family business and we have high respect for their rural culture something we don’t learn enough about in Ireland but should do”.

Other Irish Japanese notes of interest

Pioneering Irish nurseryman John Joe Costin developed strong links with Japan during his career. He represented Ireland at the Japan Expo in 1991 and this gave him an introduction that allowed him to collect wild seed from remote parts of Japan with the assistance of Mikinori Ogisu and Roy Lancaster. The collected seed was dispersed amongst botanic gardens in Ireland and the UK.

Irishman Lafcadio Hearn born in 1850 spent his life traveling. Working as a writer, journalist and translator he became famous for his writing on Japanese culture. An extensive commemorative Japanese garden was planted in his memory in Tramore, Co. Waterford. Carex evergold, is amongst the wonderful plant collection to be seen there.

More information on Nursery Stock is available on our website here

Pat FitzGerald is director of Fitzgerald Nurseries and Beotanics. Along with two sites in Ireland the company has footprints in Netherlands and Portugal. The companies supply young plants to 28 different countries across the world.