Anaerobic digestion (AD) is the conversion of feedstock (any organic non-woody material) by micro-organisms in the absence of oxygen into biogas and digestate. Barry Caslin, Teagasc Rural Economy Development Programme provides more information.

It is a natural process and is well understood by mankind, having been harnessed for many years. 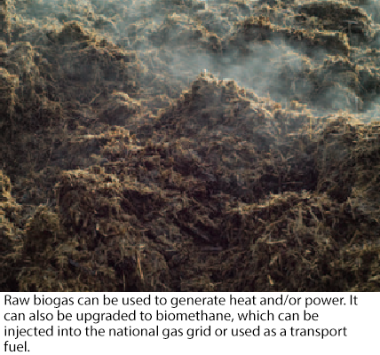 Manure and other possible biomass feedstocks are inserted into a large, sealed airless container. In this oxygen-free environment, bacteria will produce biogas. In most digesters, the contents will be heated to accelerate the process.

The produced biogas can be used to generate heat or electricity or both. This last option of combined heat and power (CHP) is the most common. The electricity that is generated through the gas engine can be either supplied to the electricity grid or used for own consumption. The heat can be used for the digester, with the surplus sold and used for heating residential or commercial buildings.

AD can be applied at a range of scales, depending on the amount of biomass available. Systems can range from small farm- based digesters to large centralised anaerobic digesters (CAD) supplied with feedstocks from several sources. The microbial process of AD requires careful management to maximise its potential output. There are several design options, which have different cost implications and return varying efficiencies, including: 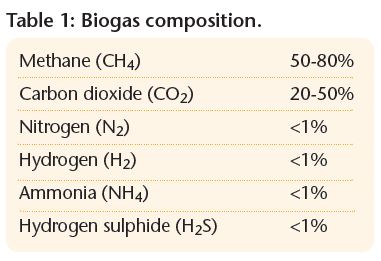 The produced biogas consists of methane (CH4) and carbon dioxide (CO2) together with minor quantities of nitrogen (N2), hydrogen (H2), ammonia (NH4) and hydrogen sulphide (H2S). Biogas from feedstocks with high carbohydrate content, such as cattle manure, has a relatively low methane content.