The British Ecological Society (BES) has announced the winners of its journal prizes for research published in 2021. The prizes are awarded for the best paper by an early career researcher in seven of the BES journals. This year The Harper Prize was awarded to Dina in ‘T Zandt, hosted at Teagasc 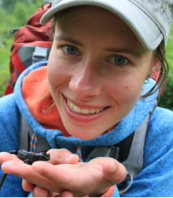 This year The Harper Prize was awarded to Dina in ‘T Zandt from Radboud University, currently at Czech Academy of Sciences and hosted at Teagasc Johnstown Castle, Ireland.

The John L Harper Early Career Researcher Award is given each year to the best paper in the Journal of Ecology by an early career author at the start of their career.

Dina in ‘T Zandt from the Czech Academy of Sciences, who conducted the research at Radboud University, and is currently hosted at Teagasc, has been awarded this year’s prize for their article: Species abundance fluctuations over 31 years are associated with plant–soil feedback in a species-rich mountain meadow.

In the study, Dina and co-authors combined a 31-year plant abundance dataset with a greenhouse experiment to test whether dominant plant species are prevented from outcompeting less-dominant species because they accumulate negative soil effects, which result from things like an accumulation of soil-born plant pathogens.

They found that on average, the most abundant plant species were also the species that showed the strongest negative own soil effects, and that, over time, significant cyclic relations occurred between species fluctuations in abundance and negative soil effects.

Dina in ‘T Zandt said: “Our findings present a novel balance between a plant species’ success (competitive ability) and its limitations (own soil effects), which we propose to be driven by soil nutrient availability (years in which manuring occurred). The paper stands out due to the exceptionally long time series it covers, the cyclicity it uncovered and the presented conceptual framework to reconcile the complexity of the findings.”

Dina added: “In this study I particularly enjoyed the practical work in the greenhouse. It certainly was a lot of work, but I was lucky to have a dedicated MSc student and many technicians by my side. It really was a lot of fun to work together with so many enthusiastic people, day in day out listen to 90s music, and order pizza and beer to celebrate planting and harvesting days.”

David Gibson, Senior Editor of the Journal of Ecology said: “Dina’s study is an excellent example of how to match field and experimental greenhouse studies to investigate the role of plant-soil interactions in plant community assembly processes. The results of Dina’s study help explain contrasting results of plant-soil feedbacks reported in the literature, reflecting the dynamic nature of plant communities.”