The interest began with his grandfather, Donal Geaney, who most notably bred two time Olympic Eventer (2008 and 2012), and Olympic team gold winner in 2008, Mr Medicott, also 2012 USEA Horse of the Year topping the World Breeding Federation for Sport Horses eventing rankings. “Dad, Donie really enjoyed riding and producing young horses and both he and our mum Lisa encouraged us all to get involved when we were younger and supported us so much.” Dan’s parents run their family business Crag Cave which is located on their 30 acre farm in Castleisland. With 12 stables in the yard and a loose housing shed for young stock Dan, and his siblings, have always had the benefit of ponies and horses at home to ride and learn with.

Dan remembers starting out in the show jumping rings in the ‘under eight’ pony classes. Initially he participated in pure showjumping and the various pony club activities, “but showjumping was the main love and demanded fuller commitment so I focused more and more on that”. Dan’s early years in ponies are dotted with wins and placings in 128cm and 138cm classes. At the age of twelve he started to travel up to Co. Clare regularly for lessons from Michael Blake who remains a constant source of support and guidance. It began to get more serious in 2015 with a win in a 138cm class at the Cavan Home Pony International Show and a subsequent outing in the 138cm national championship class at the RDS Dublin Horse Show both on County Express.

In 2016 Dan stepped up to compete in 138cm 1m25 Premier Grand Prix classes and won a 138cm class at the RDS Dublin Horse Show the same year with County Express. Also in 2016 at the SJI Pony & Young Rider Championships in Mullingar Dan won the 148cm Pony Discovery class for 4/5 year olds with Crag Vivendi. The highlight of Dan’s pony career was in the summer of 2016 when he was selected to compete on the Irish Children on Horses Team at the European Championships on Coral du Carel, owned by Danny Keogh of Killaloe Co. Clare, at the Green Glens Arena in Millstreet. Later that summer Dan also won the 138cm ‘Young Champion of Ireland’ competition on his pony County Express at Millstreet International Horse Show. In 2017 he qualified Coral du Carel for the RDS Dublin Horse Show in the 1m25/1m30 competition, all the while with a scattering of placings at various local shows and leagues. 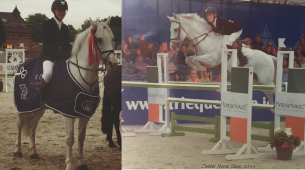 During the summer of 2019 before undertaking his Leaving Cert year Dan had the good fortune to work for Barry O’Connor in Malahide. “I brought my horse Inspector Roscoe with me and received great training from Barry which helped me improve my riding. Barry is a professional to the core and I learnt so much about the business and his system of production which was of huge benefit.” Barry also hosts young breeders on his farm from time to time. “In August I was delighted to win a 1m25 Munster Grand Prix Development League class in Limerick.” Then it was back to school and more local outings for the most part aside from a trip to Cavan Indoor International Horse Show CSI1* in November picking up a win & two second placings all on Inspector Roscoe. 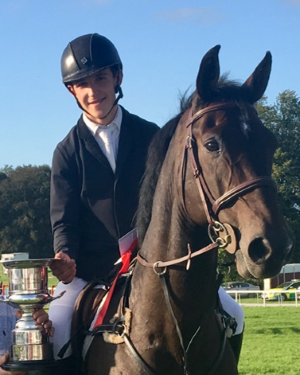 Dan then got the opportunity to ride for Helen O’Regan of ‘KK Sport Horses’ after completing a very good leaving cert in 2020. “It was a really great opportunity to ride Helen’s lovely horses and compete up to 1m40 Gr Prix’s. Super to get the mileage and some good placings. It was really important to get that experience having not jumped at that level before.”

In July 2021 a fantastic opportunity presented itself to work at Cian O’Connor’s ‘Karlswood Stables’ in Co. Meath under the guidance of Cian and Ross Mulholland. “I am exceptionally grateful to be able to learn from Cian, Ross and all the staff at Karlswood and to be able to compete on some of Cian’s horses. I want to keep on learning to be the best rider I can be with the hope to pursue a career jumping internationally in the future. Karslwood is an amazing place with a great atmosphere and I hope to continue to build on my strengths and develop my skills while also learning to make the best of the horse’s ability and potential.”

Dan also says “I am very interested in breeding and would love to commit more time to breeding in the future. For now the priority is to develop my riding, but I have negotiated a partnership in two broodmares with my father - a horse called Orchids Isobel bred by the very successful Orchid Stud who has shown lots of ability over a fence and Crag Chippy (Chippison x Spring Elegance VII) who is a half-sister to Crag Vivendi who I previously competed. They are both in foal to Vivant de Heffinck for 2022.”

Dan first got involved in the Young Breeders Programme at the Young Breeder National Championships at Ravensdale EC in January 2019. “We spotted it on Facebook and thought it looked interesting so decided to give it a go. I knew a bit about judging a horse while loose jumping, had never presented a horse on the triangle in hand, and knew very little about conformation other than a gut instinct I suppose, so I was really surprised and delighted to win the junior section of the competition that day. It was a really enjoyable experience and so interesting to hear Andrew Hughes, Jack Doyle, Philip Scott, Richard Sheane and Tiernan Gill discuss the lovely horses that we got to assess on the day from Cooley Farm.” Dan subsequently attended team selection training for the World Championships in Stadl Paura Austria during the summer of 2019 and met the standard to travel as a team member on the junior team. “The trip to Austria was amazing. I hadn’t experienced anything like it before, thoroughly enjoyable”.

Dan concedes it was “a big learning curve, particularly with the conformation assessment and in hand presentation. I learned to spot things that nobody had taught me before. The trainers and owners of the farms we visited have exceptional knowledge and I found it really helpful to hear their perspectives. My Dad and I often go looking at horses to buy and now I feel much more confident evaluating them and hopefully we will bring home less ‘dodges’ in the future. Dad is also interested to hear my perspective now too.”

Dan wasn’t always the most outspoken at training to begin with and liked to listen and take it all in. He says “it was challenging at times when we had to vocalise our thoughts in the group and with the trainers, but the only way to learn is to speak up and ask questions. The more you ask the more you learn, it’s very important to do that. Just standing there listening you hear all the right things, but unless you have to pick out strengths and weaknesses yourself and put them into words you don’t improve. I made a lot of mistakes but the trainers talked those through with us and I really learned a lot”

“I’m not really one for giving out advice, but I would definitely encourage others to get involved in the programme".

"We trekked all around the country from Kerry, my Mum was great chauffeuring me and I really enjoyed the experience. It was completely different to anything I had experienced before and a fantastic opportunity to visit all the farms and see such a variety of horses. I hope to get back out any chance I can when I’m not competing under saddle and my younger brother is also keen to get involved.”