This year the mid May frosts in may have caused substantial damage to trees around the country. Both broadleaf and conifer trees have been affected. Forestry Development Officers Kevin O’Connell and John Casey have some advice on assessing the damage and options available.

The frost that occurred in mid-May  was an unusual frost in that it was found on sites at 200 m in elevation and also in lowland frost hollows. The main sites where frost occurred were in the midlands in general and localised areas such as valley and inter drumlin bottoms and also on steep slopes in narrow valleys.

Both broadleaf and conifer trees have been affected. A lot of this damage can be attributed to the mild winter and the warm weather in March, April and May. Trees flushed earlier than usual and this has influenced the severity of the damage caused by the spring frost. What was also unusual was the height of the trees affected. Normally frost will damage trees up to 2 metres in height, but this spring it has been reported that trees as tall as 5 metres have been injured. 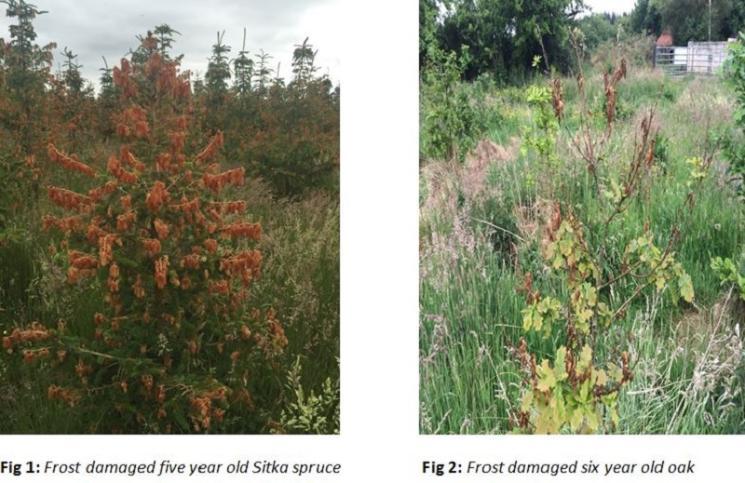 It is thought that the humidity at the time followed by a rapid rise in temperature contributed to the severity of the frost. The buds, needles and leaves of young trees were coated in moisture which froze and the subsequent thawing was too rapid. The moisture or ice on the shoots formed a film around the foliage and this may have acted like a magnifying glass to increase the sun scorch damage on the sensitive foliage.

Frost can affect young trees in a number of ways. They can be killed outright due to extensive injury to the cambium layer inside the bark. Damaged trees can also be susceptible to other pests and diseases. In older trees particularly in conifers it can result in the death of the leading shoots. This will result in forked leaders, crooked stems and loss in height growth, which will reduce tree quality considerably. Table 1 outlines the sensitivity of common broadleaves and conifers to late spring frosts. 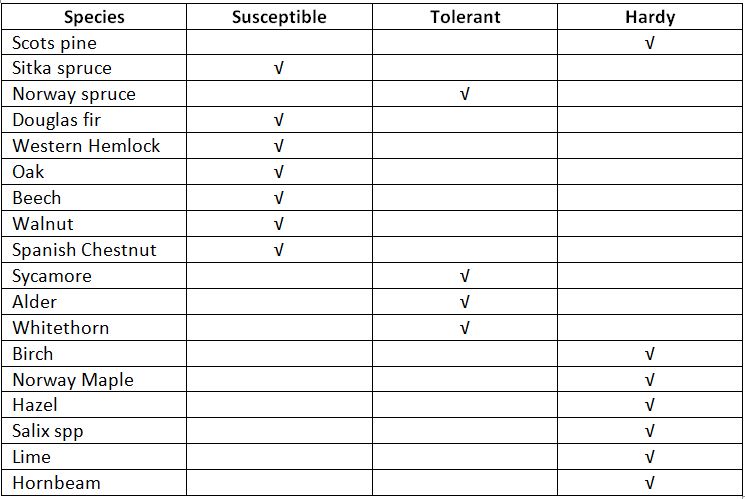 Under the Forestry grants and premium scheme, owners whose forests are still in the first 4 year of establishment are somewhat protected financially from the consequences of frost damage to their new plantation. A reconstitution scheme may be made available by the DAFM (Forest Division) to replace the dead and damaged trees. It is a different story however for owners with plantations older than 4 years. There is no financial assistance when the crop gets to this stage.

Trees are generally resilient and in most cases recover. Owners of broadleaf woodlands should continue to shape and high prune their trees. Owners of conifer plantations in particular Sitka spruce, less than 4 metres, should walk their plantation and assess the damage. If the height of the trees in is greater than 4 metres it would be impractical and costly to carry out any remedial work. 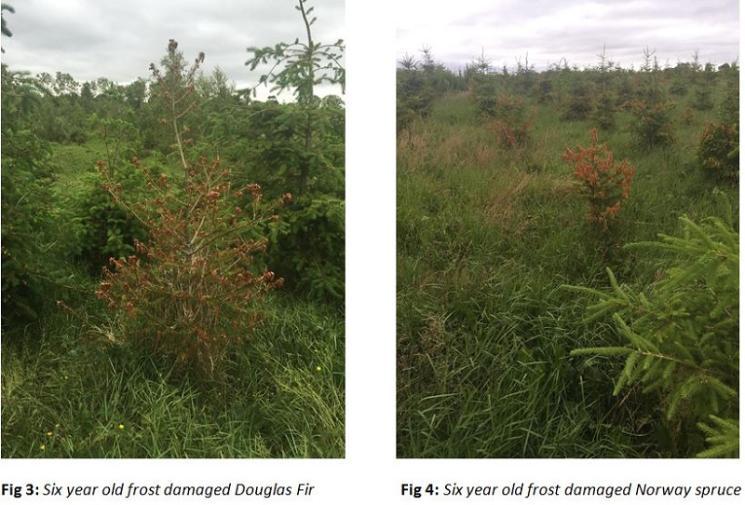 If a plantation has been severely damage and a lot of the leading shoots are dead the potential loss in quality could be significant.The scenario out lined below is an indication of the potential financial loss in an 8 hectare Sitka spruce plantation GPC 3, with 15 % biodiversity area, 15% broadleaves and 15% leader damage as a result of frost.

The first thing to note is that the revenue drop due to frost damage in 1st and 2nd thinnings is not very severe. The majority of the timber in these thinnings will be sold as pulp wood or pallet wood. For pulp wood especially, the quality or “form” of the tree is not significant. However, there is potential loss of almost €23,000 at the clearfell stage, because some of final crop trees have been downgraded from the most valuable sawlog category to the less valuable pallet wood or even pulp wood categories.

The downgrading is due to poor form quality and straightness of the trees because of the previous frost damage. Most clearfelling operations come with an obligation to replant under the Forest Act 2014. It is worth noting that the cost of replanting 8 hectares is estimated at €20,000- €24,000, figures similar to the losses potentially incurred by frost damage. If this damage is not addressed in time, while the forest owners may see only burnt leaders now, the hole burnt in their clearfell profits will definitely be seen in 30+ years!!

The management options open to the owner are limited. Outline below are some suggestions but they are time consuming and costly.

The severity of this frost came as a surprise to a lot of owners and foresters. Is the premature flushing of trees in spring making them more susceptible to late spring cold snaps going to become the norm due to climate change? Only time will tell.