Irish Pig Market; Riding high in Dec but shot down in May


Michael McKeon, Teagasc Pig Development Officer, Moorepark, reviews the Ups and Downs of the Irish Pig Market of 2020; a year of great promise but of modest profitability. He also discusses the volatility of the feed ingredient market here

The Irish pig sector is well used to being buffeted by the winds of the open global market but even by historic trends the last 12 months was a year to remember, or perhaps more accurately forget! Not due to poor profitability but to the lost opportunity of achieving one of the most profitable years for pig producers in a generation.  In December 2020 the high Irish pig price (€1.98/kg) was generating an historic margin-over-feed of 89c/kg, which for a sector used to surviving on a margin of 46c/kg, was nirvana (not the band, the other one). The 2020 outlook for global pigmeat demand looked really buoyant due to 40-60% of the Chinese sow herd being decimated by African Swine Fever (ASF). On the input side the feed ingredients market outlook was very steady with ample global stocks, albeit the market had factored-in poor cereal sowing in autumn 2019. In short, the prospects for 2020 were excellent, what could go wrong? The Teagasc Outlook Conference in December 2019 put a proviso on this optimistic outlook, within the ‘small print’, by citing that the pig trade in 2020 could be affected by ASF.  Although this proved correct, it was another virus unknown just 13 months ago, called SARS-Cov-2 (Covid) that was ultimately to affect all aspects of the global economy and society.

The impact of Covid-19

At the end of January 2020 we became aware of the Covid19 pandemic when the Chinese city of Wuhan was shutdown, this was later followed by the rest of China. This immediately disrupted Chinese consumer pork demand as hundreds of millions of people were temporarily unemployed. As a result the Irish pig price began to start its slow decline (Fig.1) that would continue for rest of the year. When the Chinese economy emerged from lockdown in March and pigmeat demand returned another issue arose. Due to the lockdown an estimated 60% of global refrigerated shipping containers (reefers) were stuck in China. This logistical tangle slowed the volume of pigmeat exports from Europe and Ireland until May.  Unfortunately, by then Europe was in a lockdown which affected ‘domestic’ demand and just as we emerged from that, the industry was hit by a number of COVID outbreaks in pig slaughter plants across Europe that caused a pig backlog. These were just cleared when an ASF outbreak occurred in Germany in early September which closed the German market for Asian exports and resulted in extra product on the EU market All of these events disrupted trade, consumers demand and pig supply with a resultant downward pressure on the pig price on Irish pig units to ultimately the €1.54c/kg we have today. 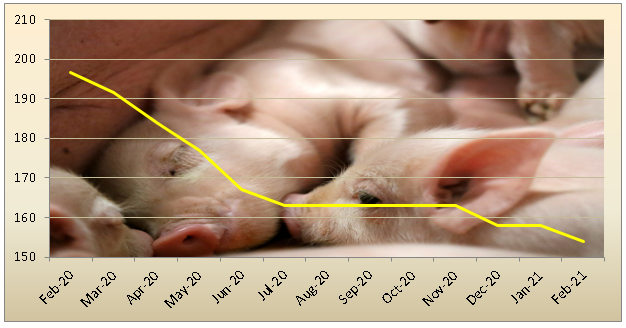 The 2020 Teagasc Outlook Conference forecast was accurate that Chinese pigmeat demand and consequently EU exports would increase (Fig.2). In the first seven months of 2020 the EU pigmeat export volume to China was 73% above the 2019 level at 1,872.692 tonnes. This is above the annual (12 month) total exported in 2016 and is equal to the combined annual exports of 2014 & 2015. China now consumes 55% of all EU exports, which while welcome, is a risky scenario for the EU.

The shortage of pigmeat in China has been reflected in their domestic price (Fig.3). Traditionally the Chinese pig price was within the range 8-10 Yuan /kg live. However, in 2019 it rose steadily due to the shortages of domestic pig supply and this rise continued into 2020, generating a pig price this year 25% higher than 2019. This translates into a sale price of €505 per finisher pig, and even more impressively €350 for a 32kg weaner- unfortunately, before any farmer picks up the phone, Ryanair doesn’t fly Irish weaners to China! 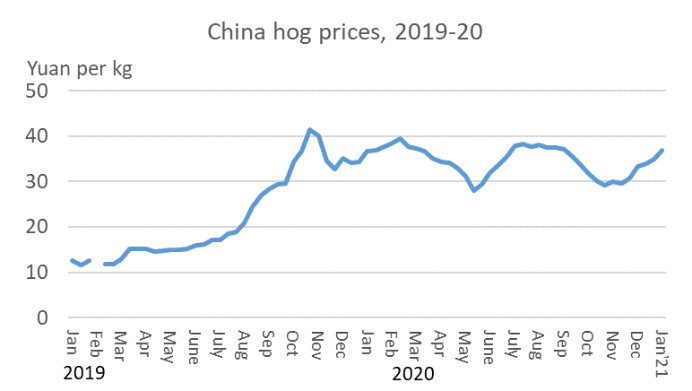 So what is the pig sector market outlook for 2021?

The Chinese pigmeat import demand will continue to be high in 2021, although it will cool after their New Year celebrations this month (February). Recent reports had cited that the Chinese sow herd would have fully recovered by early 2021 but this was later put down to ‘over- enthusiastic’ Chinese regional officials. In reality the herd is recovering but it will be at least 2022 before they reach 90-95% self-sufficiency. Recent reports of further Chinese ASF outbreaks may further slow this recovery forecast.

On the other side of the coin the feed ingredient market is more volatile than in recent years. The poor U.S. & E.U. yields and poor Irish harvest conditions last autumn have pushed up feed ingredients prices, especially for wheat (€235) which has increase by €40-€45/tonne compared to 12 months ago.

The Brazilian soya planting last autumn was the slowest in 12 years. However, this is a godsend as they received abnormally heavy rain in January which would normally coincide with harvest time but due to the late planting and delayed crop growth, the rain will help to fill the pods and improve yields.

The industry forecasts are for a Brazilian soya yield of 133 million tonnes in 2021 which would be an increase of 7% on last year’s crop (124MT). The Argentinian harvest has also benefitted from the rain with a 4% increase in crop forecast (from 47-to-49MT). The buoyant South American outlook will help to take some of the heat out of the soya market in coming weeks as prices are currently peaking at €550/tonne (up 50% since last July!). However, the US is still expected to have the lowest closing stock level in the last 10 years so the forthcoming U.S. crop will be closely watched for any hiccups – fingers crossed it’ll be a bumper one!

Overall the pig feed ingredient outlook is for the Chinese demand for soya and maize to increase as the pig herd recovers, EU grains to remain tight until harvest and soyabean prices to ease marginally but will be very price sensitive to the U.S. soya crop’s progress.

In conclusion, 2020 was a year that promised so much for Irish pig producers but ultimately, while still modestly profitable, was very disappointing.  The last 12 months can be best summed up by the words of Frank Sinatra; ‘That’s life, that’s what all the people say, riding high in December but shot down in May”. Who would have thought he knew so much about the Irish pig market!