Beef and tillage organic enterprises are thriving in the county. Elaine Leavy, Organic Specialist and Drystock Advisors Jane McConnon & Shane Filan meet two farmers, one in beef the other in tillage, who tell their organic story from initial conversion through to a new and thriving business.

Tillage is making a comeback in the Drumlins of Monaghan. With only 312 organic tillage farmers in the whole country in 2020, you mightn’t expect to come across fields of wheat, oats and barley in the traditional grassy hills of Monaghan.

But there are changes in the air and a renewed enthusiasm around the opportunities offered by organic farming. 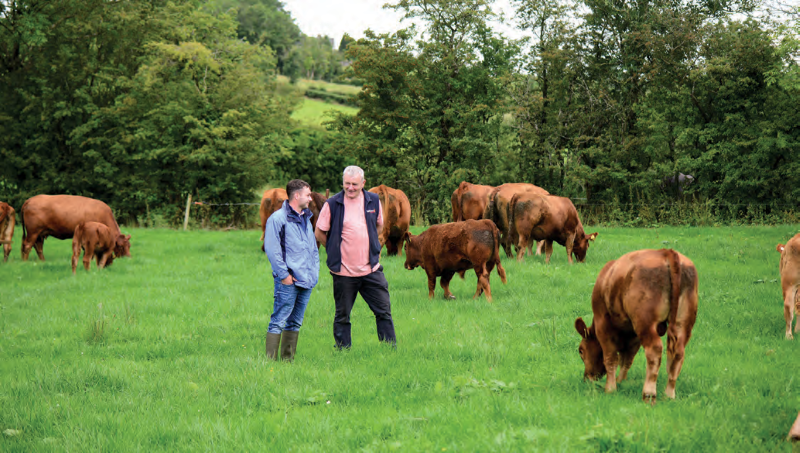 Sean Greenan's farm is located at Cremoyle in the heart of the county. Once, a dairy farm, Sean always planned to build a suckler herd. Since 2008, he has established a herd of Stabiliser cows on the 30ha farm and recently reached a 100% pedigree Stabiliser herd.

“I always had an interest in organic farming,” says Sean. “Having seriously considered making the change in 2018, I felt the time was right in 2021. The uncertainty around getting into the Organic Farming Scheme delayed the decision.”

The farm entered organic conversion in spring of this year. Shane Filan his Teagasc advisor assisted with the applications to the Organic Certification Body and the Department of Agriculture Food and Marine (DAFM) Organic Farming Scheme (OFS).

“An organic conversion plan, a farmyard plan and a nutrient plan were all required,” says Shane. “In September, Sean was informed by the DAFM that he had been accepted into the OFS.”

Even though the farm has only entered organic conversion in recent months, Sean says: “We were already three quarters the way to being organic; we were spreading very little fertiliser in recent years.”

Sean says he wanted to farm in a more sustainable way by becoming more self-sufficient and reducing the costly inputs required from outside the farm gate.

The Stabiliser is an ideal breed for an organic system as it is a composite breed developed by the crossing of the Hereford, Red Angus, Simmental and Gelbvieh. The aim is to harness hybrid vigour and produce a low maintenance suckler cow with easy calving traits, good milk, fertility and temperament. Sean has a good market established for the pedigree bulls as they are suited to both beef and dairy herds.

“I’ve been a member of a local Teagasc beef discussion group for a number of years and topics such as incorporating clover into grass, soil fertility and breeding were discussed with farm visits to other group members including Mark Gillander’s organic farmer,” says Sean. “I was very interested in what we saw there and it began to get me thinking about farming organically.”

Changes made on farm

Sean is a firm believer that ‘you don’t learn anything until you do it’; this is very evident from what he has achieved with his farming system in this, his first year of conversion

Based on recent soil results and soil type he drew up a cropping plan. “The overall focus is to put a rotation in place that will allow Sean to grow cereals, maintain soil fertility and maximise production with the inclusion of both red and white clover and multi species leys,” says Shane Filan.

Given that one of the aims in organic farming is ‘to feed the soil to feed the plant’ Sean is acutely aware that soil fertility will need to be monitored to maintain optimum production.

The first step to improving soil fertility has already been carried out with the application of two tons per acre of lime over 75% of the farm in the springtime. With Shane’s help, an up to date nutrient management plan will be followed on an ongoing basis.

“In spring, we sowed nine acres of wheat to provide winter feed for the herd,” says Sean. “Along with a recently established red clover silage sward, this will provide a high quality diet for the weanlings over the winter.

“I’d estimate the total cost of producing the crop of wheat was €222 an acre, as I did a lot of the cultivation work myself. There were challenges in growing the crop. A cold May left initial germination slow, while during the summer red shank established itself in the crop.”

Come harvest time Sean had to set the combine header a little bit higher than he would have liked to avoid the withering red shank. However he was happy with his first grain yield of 1.1ton/acre and yielded 3.5 bales per acre of straw.  He says if he were to purchase the same amount of an organic concentrate, it would cost him in the region of €5,000.

“We sowed a red clover silage sward this year in order to produce high quality, high protein silage and to help build up fertility in the ground for cereal crops to follow,” says Sean.

He has laid the groundwork in his first year of conversion to become a productive and profitable organic enterprise and he says this has made him ‘excited about farming again’.

The conversion to organics has given Sean the opportunity to establish a successful cereal enterprise alongside his already successful pedigree Stabiliser herd. 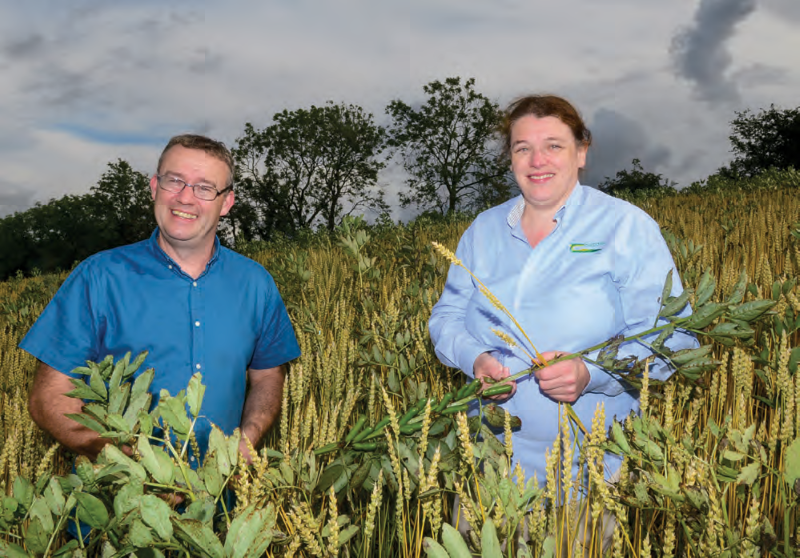 Mark Gillanders farms in Bellanagall just on the edge of Monaghan town. “I began looking at organic farming as an option when the costs of concentrate and fertiliser in my high input bull beef system had become prohibitive,” says Mark.

“After attending local farm demonstrations and walks I decided that organic farming could be a more profitable system.”

There have been significant changes made to the farming system since entering organic conversion in 2009 and Mark continues to develop his farm for productivity and profitability.

Firstly he built up a suckler herd and brought the progeny to beef.  He then began to grow cereals starting with oats, then experimented successfully with combicrops (such as wheat and beans) and other cereal crops.  “We were able to do this by implementing organic farming practises such as planning crop rotation, maintaining soil fertility and careful nutrient management practices.

“After experiencing some success with growing cereal crops, we leased extra land and the area devoted to cereals increased.”

While doing all this on the farm he also completed a Masters in Organic Farming in 2019. The three year part-time distance learning course completed at SRUC College Aberdeen was supported by National Organic Training Skillnet (NOTS).

“The course opened my eyes to more than just farming as it involved a wide range of taught modules on technical and marketing skills. I also enjoyed ‘the mix of other people’ on the course.”

Mark was also a participant in the Teagasc/DAFM National Organic Demonstration Farm Programme, which involves opening your gate and hosting national and local farm walks.

With his involvement hosting, participating in meetings, and being a member of the IFA Organic Project team he crossed paths with another Monaghan organic farmer, Micheál Rafferty, an organic beef and cereal farmer, farming organically since 2015.

Mark and Micheál have since joined forces and have set up an organic mill, milling the wheat grown on their own farms into flour and selling it under their own brand ‘Irish Organic Mill Ltd’.

“This all came about as we were both looking for alternative outlets for our organic cereal produce,” adds Mark. “Most importantly we wanted to have full control of the process and add value to our produce.”

During the Covid pandemic, a lot of people’s attention turned to knowing where their food came from. With more people cooking and baking at home demand for locally produced ingredients increased.  Mark says people were ‘more about where their food comes from’.

Mark and Micheál decided to set up a mill and start milling their own organically grown wheat to flour. “We were confident we could grow a quality crop and get it into the shed,” says Mark.  “Processing and marketing of the flour was where the challenge lay.”

They contacted their Local Enterprise Office (LEO) in Monaghan, who have been invaluable in providing advice, mentoring and funding to them in the setting up of the mill and selling their flour.  In late September 2021, Irish Organic Mill Ltd brought Stoneground Irish Organic Wholemeal and Plain Flour onto the market.

This article was first published in Today's Farm - November/December 2021 Click on the link to read more articles.