To help celebrate our new partnership with the Marine Institute and the launch of this year’s “Oceans of Learning” campaign we have created some resources about seaweed and other marine research being carried out in Teagasc.

One of the last remaining patches of giant kelp (Macrocystis pyrifera) on the east coast of Tasmania, Australia (image above courtesy of Cayne Layton, UTAS).

Seaweed grows in great abundance and diversity in Ireland, where 500 species are found. Alaria esculenta, also known as winged kelp, Irish wakame or badderlocks, is a brown seaweed. It is a nutritious and valuable source of proteins and bioactives.

Its opportunities include as an alternative salt, a flour to enrich traditional flours or make healthy snacks, a powder to enhance beverages, or in capsule form for a targeted delivery of benefits.

Seaweed aquaculture systems can provide habitats for many animals including fish, to whom seaweed can offer protection during the nursery stage.

You can read more about Alaria esculenta aquaculture in Ireland in the spring issue of TResearch. 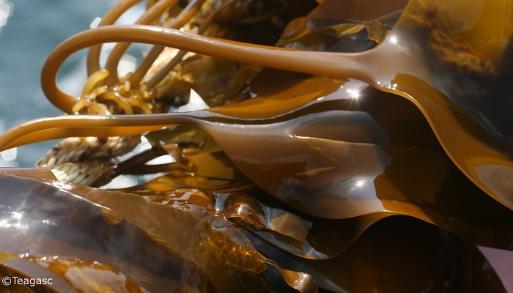 The future is kelp!

Researchers at Teagasc and the Cawthron Institute, New Zealand, are looking at bioproduct isolation from native Irish and New Zealand macroalgal species.

Seaweed has a rich history of use in Asia as food and medicine, and in Ireland it was used as a fertiliser and animal feed. At present, the range of seaweed products spans food, feed, dietary supplements and pharmaceuticals.

Kelp is the common name for one order of brown seaweeds, Laminariales, which includes approximately 30 varieties. Kelp species range in size from several centimetres to over 50 metres for the giant kelp found off the coast of Australia, New Zealand, California, and South America!

Laminaria digitata is a native Irish species, it is a common kelp found in low-level waters around the Irish, north European, and eastern North American coast, and can grow up to 2.5 metres long and 60 centimetres wide. It has several common names, including the Irish leathrach or coirrleach.

Learn more about Kelp in this article from TResearch.

The peculiar environmental conditions that exist in the ecological zone known as the ‘twilight zone’, including high pressure and darkness, along with the position of mesopelagic fish at the bottom of the food chain, result in a lot of diversity in their bio-composition.

Mesopelagic fish are currently an underutilised resource despite the fact that they are rich in proteins, omega-3 oils, and other nutrients. They could give processors new opportunities to develop feed, food, and functional food ingredients and products. However, there is also a need to ensure that this resource is not overfished.

The abundant availability of fish and zooplankton in the mesopelagic zone of the oceans is a source of novel raw materials that provides opportunities for sustainable bioprocessing.

Read the full article featured in the latest issue of TResearch here.

Find out more about seaweed, how it’s harvested and some of its great benefits in the video below made as part of the Science Squad series on RTÉ 1.