This project was a collaboration between Teagasc & University College Limerick. It investigated the effects of nutrition and management on gilt welfare and performance. Phoebe Hartnett, previous PhD student who worked on the GILTLIFE project tells us more.

This project was a collaboration between Teagasc & University College Limerick. It investigated the effects of nutrition and management on gilt welfare and performance. Improving rearing conditions for replacement gilts should improve their welfare and increase their output.

In Ireland replacement gilts are reared with pigs destined for slaughter, which means they are exposed to the sexual and aggressive behaviour performed by entire male pigs. This is associated with stress and injury. Furthermore, finisher pig diets do not meet the needs of growing gilts, particularly regarding the minerals needed to optimise limb development. Thus, poor rearing can lead to impaired lifetime performance and early culling. To address this, we investigated how gilt rearing strategies affect current and long-term welfare and performance.

Study 1. Effect of rearing strategy on gilt welfare from weaning to service age

This experiment investigated the effect of group composition (single (SS) or mixed sex (MS)), with or without supplementary minerals (MIN- = control diet; MIN+= control + Cu, Zn and Mn) during rearing, on the live weight, locomotory ability, salivary cortisol levels, behaviour, body lesions, and hoof health of replacement gilts, from when they were weaned until they were served. We found that SS gilts tended to grow faster  than MS, possibly due to experiencing less stress; indeed, at service age SS gilts tended to have lower salivary cortisol levels than MS. This is likely due to less exposure to aggression and sexual behaviour in the SS pens, compared to MS. Indeed, gilts in the SS pens also had lower body lesion scores, probably as a result of less physical interaction taking place. Although there was no difference in locomotory ability, gilts in the MS groups also had more damage to their hooves overall, and specifically worse white line disease and heel-sole separation. Gilts on the MIN- diet also had worse heel erosion than the MIN+ gilts. Thus, rearing in single sex groups had significant benefits during rearing, and the MIN+ diet also improved hoof health.

Study 2. Effect of rearing strategy on gilt welfare during the first gestation, and impact on performance 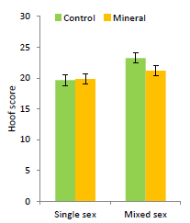 80 gilts from Study 1 were bred, and monitored using similar welfare measures throughout their first gestation. The number of offspring born dead and alive during the first 5 farrowings were recorded, and the performance of the first litter to slaughter age. The hoof damage that had started during rearing became progressively worse, particularly in sows which had been reared in MS pens. However, addition of MIN+ reduced this damage, so in cases where gilts must be mixed, mineral supplementation is beneficial. Although there was no difference in piglets born alive, or the growth of the piglets, MS sows had a higher number of stillborn piglets which could reduce lifetime performance. Overall, rearing replacement sows in SS groups and with the addition of a mineral supplement had minimal but beneficial effects on their subsequent welfare and performance.

Phoebe Hartnett is the PhD student who worked on the GILTLIFE project. She was supervised by Dr. Keelin O’Driscoll & Dr. Laura Boyle from Teagasc, & Dr. Bridget Younge from University of Limerick. Phoebe completed her BAgrSc in Animal Science at University College Dublin. During her PhD she spent 3 months working in the SRUC biomarker laboratory. Since completing her studies Phoebe continues to work with Teagasc as a Dairy Board research technician. She is interested in all aspects of animal health & welfare, with a focus on laboratory based measurements.