PLF technologies are playing an increasingly important role in the early diagnosis of disease in pig production. By collecting animal- & environment-based data, these tools support decision making at farm level. In the case of respiratory disease, the Pig Respiratory Distress Package (SOMO) performs continuous & automated measurements of coughing by analysing the sound collected within a pig house using a microphone. This tool was developed to give farmers an objective measure of coughing frequency in finisher pigs (>25kg) & studies show its potential for early detection of episodes of respiratory disease when compared to detection by farm personnel.

Study 1. Coughing frequency & the prevalence of lung lesions at slaughter

This study aimed to assess the relationship between manual & automatic assessments of coughing & the prevalence of lung lesions at slaughter. Pigs (n = 1573) were monitored from 25 ± 5.3 kg to slaughter at 114 ± 15.4 kg & were housed in eight rooms divided into six pens on a wean-to-finish farm. A manual pen-based coughing frequency (CF) assessment was recorded weekly, for ten consecutive weeks, & a SOMO box was installed in each room, issuing a daily respiratory distress index (RDI) for 12 weeks. Lungs were individually scored for pneumonia, scarring & dorsocaudal & cranial pleurisy lesions at slaughter.

Results showed agreement between the manual assessments of coughing & the SOMO measurements. We found positive associations between lung lesions & coughing at the end of the finisher stage. However, coughing was also recorded in the earlier production stages but was not reflected in lung lesions at slaughter, indicating that further research is required to validate the SOMO for use with weaner & grower pigs. Furthermore, our findings call into question the validity of the SOMO’s alarm system which indicates the presence of respiratory disease on-farm. Despite the high prevalence of lung lesions recorded at slaughter the alarm only sounded once in the current study. Although the exact threshold to indicate the presence of respiratory disease is likely to be farm-dependant, further studies are needed to clarify differences in levels of coughing: throughout production stages, in different environmental conditions (e.g. high concentrations of ammonia & dust), & to verify the baseline coughing frequency in healthy pigs.

Based on the findings of study 1, which showed that the SOMO alarm system was ineffective to notify on-going respiratory problems on-farm, we carried out a trial that aimed to classify patterns of coughing according to environmental risk factors, & to verify the baseline coughing frequency in healthy pigs. From March 2019 to January 2020, we followed 3 batches of finisher pigs (from 10 weeks to slaughter) on a respiratory disease-free farm. 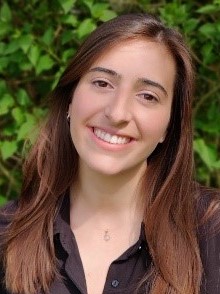 Joana Pessoa is the PhD student working on the PLFPigCarc project. She is supervised by Dr Laura Boyle in Teagasc, Dr Conor McAloon in UCD & Dr Tomas Norton in KU Leuven.

She studied Veterinary Medicine in the University of Lisbon, completed her Master’s thesis on the burden of foodborne pathogens in Denmark & is currently undertaking her Residency for the European College of Veterinary Public Health.