For the final Map of the Month of the year 2021, we take a closer look the abandoned town of Newtown near Jerpoint Abbey, Co. Kilkenny, which according to local legend is the resting place of St. Nicholas. This map by Daniel O'Mahony, Walsh Scholar looks at how technology revolutionised archaeology.

View and interact with the map here: Unearthing a medieval town

Little trace of the medieval market town of Newtown is left to the naked eye. Nowadays, only the ruins of an old church located within the green fields beside Jerpoint Abbey, Co. Kilkenny, provide a hint of what once has been. First incorporated as a borough in the early 13th century, the settlement has been abandoned since at least the early 18th century. While still noted in the historic Ordnance Survey Ireland 6 inch maps of the country, published 1842 (see image below, the particular area was surveyed in 1836), the area of the former town is now completely under agriculture. 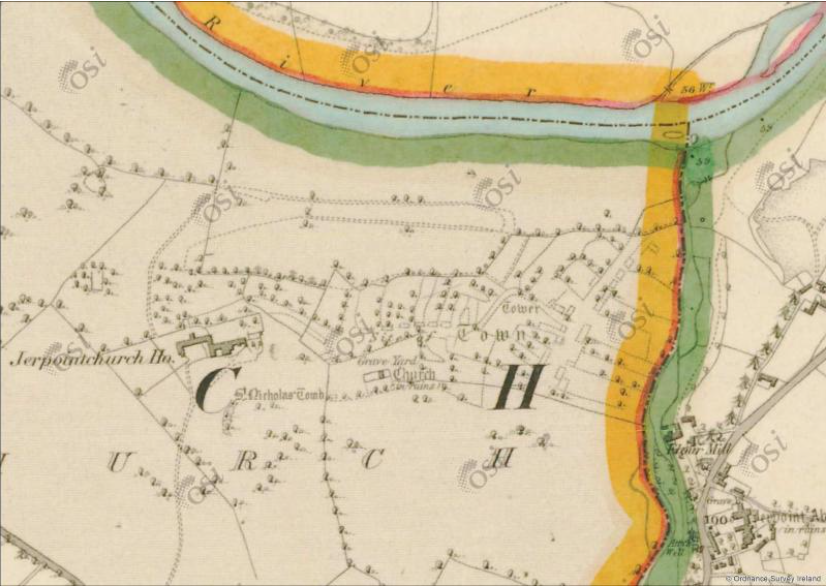 According to local legend, and an entry on the OSI map, the local church also is the resting place of St. Nicholas.

Using modern technology, archaeologists are able to retrace the old structures without having to take a spade to the site, seeing long lost features such as ridge and furrow, two extended mill complexes, possible land drainage, domestic dwellings, and animal enclosures.

As part of a Teagasc Walsh Scholarship looking at the better understanding of monuments on agricultural land, we explored the use of new technologies to communicate the story of Jerpoint to a wider audience. In this story map we focus on two specific techniques that help us bring the long lost settlement of Newtown back to life.