Teagasc researchers Shilpi Misra, Corina E. van Middelaar, John Upton and Keelin O’Driscoll evaluated different washing and disinfection methods on pig farms. No difference in both water use and bacterial load was found; power washing without pre-soaking or detergent was the simplest method.

Water use by livestock is of environmental concern as water resources are limited and the livestock sector, including pork production, contributes significantly to global water abstractions. Pig farms require water for both on-farm (drinking and cleaning) and off-farm (feed production) purposes. Washing of facilities and equipment on pig farms is essential due to strict biosecurity protocols to avoid disease outbreaks and optimise animal welfare, and is especially important for young pigs. However, there is a lack of data regarding both the quantity of water used and the effectiveness in reducing bacterial load of different cleaning and disinfection strategies for younger pigs. Thus, the aim of our study was to quantify the effect of three different washing treatments on water use, bacterial levels and cleaning time when washing weaner pig pens.

A water meter was installed on the power-washing water supply line to record the volume of water used. The time taken to wash each pen was also recorded, as was the time for which sprinklers were operating for the treatments, including pre-soaking. To determine the efficacy of the different cleaning treatments, swab samples were collected from the floor, feeder and wall of each experimental pen both before washing, and after washing and drying. Microbiological analysis was conducted on the swab samples to calculate total bacterial count (TBC), and levels of Enterobacteriaceae and Staphylococcus.

There was no effect of treatment on any measure of water use. There was an overall effect of treatment on the time taken to wash a pen, with SOAK and SOAK+DETER reducing the washing time per pen by 2.3 minutes (14 %) and 4.2 minutes (27 %), compared to WASH. Thus, both pre-soaking and use of detergent reduced the time taken for pen washing. None of the treatments, nor the interaction between treatment and time (before or after washing), had any effect on any of the bacterial count measurements (Figure 1). Overall, the time of sampling (before or after wash) had an effect on both TBC and Staphylococcus counts, but not on Enterobacteriaceae counts. After washing, there was a difference between counts at all locations, indicating that washing of the walls had more of an effect in reducing bacterial load than washing of floors, regardless of the washing routine used (Figure 2). 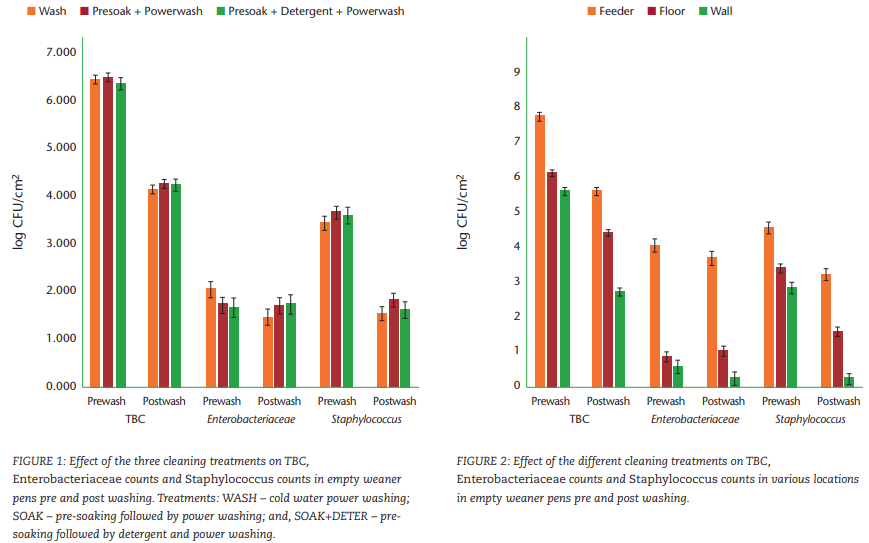 Benefit to the pig industry

Our results show that the three washing treatments used in this study had no significant effect on water use but there was a significant difference in washing time. All cleaning treatments reduced the levels of Staphylococcus and TBC from pre to post washing, even though no difference between the treatments was observed. In contrast, the levels of Enterobacteriaceae did not decline post washing. Since there was no difference in both water use and bacterial load, power washing without pre-soaking or detergent is the simplest method, and thus perhaps the preferred option. However, from the farmer’s perspective, pre-soaking and detergent use saves time and labour costs. Moreover, water use in cleaning warrants further investigation, as the use of detergent might be of environmental concern if slurry containing detergent enters sewers or public waters.