Irish herds are bigger, and animals more productive, than ever before. That's the summary from Gerard McCutcheon Teagasc Pig Development Department, Oak Park, in this interesting article, first published in Today's Farm, looking at pig performance and the changes in the Irish pig sector since 1959

In 1959, when An Foras Talúntais purchased the Moorepark farm near Fermoy and began pig research (and dairy research, of course), there were 120,000 farms in Ireland keeping pigs, supplying a national output of less than one million. Pig production was, essentially, a cottage industry that supplied meat to feed families and/or cash for the household. In 1975, the Central Statistics Office (CSO) recorded 23,000 holdings keeping pigs. This had dropped to just 3,000 holdings by 1990, with a definite move to a more concentrated “commercial” sector, with units becoming fewer and larger as a result of the need for economies of scale Today, there are circa 290 “commercial” pig farms (defined as farms keeping more than 20 pigs) with an average herd size of over 700 sows on the farms with breeding stock. The national output of pigs totals 3.8m pigs each year and the Irish pig sector is regarded as highly efficient internationally. The value of pigmeat exports in 2020 reached almost €1bn.

The Teagasc Pig Development Department (previously through AFT and ACOT) works with Irish pig farmers to help them monitor and improve their pig unit performance.

A large portion of pig farmers submit their performance data to their Teagasc advisor to assess on the Teagasc eProfit Monitor (ePM) recording system. This allows them make decisions using data and also helps monitor the impact of those decisions. Most farms submit their input figures four times each year. The data is compiled each year and published as the ‘national pig herd performance’. This is a very good measure of how farms are performing, and is a useful benchmark for the Key Performance Indicators (KPI) on pig farms. A good baseline year for the commercial pig farm performance is 2000. There has been a consistent increase in output per sow since then. In 2000, the ePM data was compiled from 141 farms (with an average of 400 sows per herd), from 98 farms in 2010 (average of 654 sows per herd), and 88 farms in 2020 (with an average sow herd of 799 sows). The database represents approximately 50% of the Irish pig herd. The main KPIs achieved on farms are shown below from 2000 to 2020.

Pigs per sow per year

The number of pigs produced per sow per year is the total born alive, minus all deaths, averaged per sow on each farm. It is a good KPI for farmers to compare their performance.

The growth performance of weaned pigs has greatly improved over the years.

Table 2 shows the performance, based on feed conversion, of pigs from weaning to sale over the same period. There has been an increase of 25.2kg in live sale weight over the 20-year period. The increase in deadweight (carcase weight) is 20.1kg over 20 years. This is significant, as it further increases the output per sow per year. The average daily gain from the time the pig is weaned from the sow to the point of sale has improved by 150g per day over the same period. The slight increase in the Feed Conversion Efficiency (FCE) is related to a rise in FCE as the pig gets heavier. The feed used for the heavier pigs is less costly and so is generally more profitable if the farmer has the accommodation to rear the pigs as heavy as the market will pay.

Having more pigs produced and the increased carcase weight of each pig has contributed to more pigmeat being sold per sow per year (an increase of 56% compared to 2000). This is a substantial increase in performance, mainly due to advances in animal genetics, nutrition, healthcare and overall management. The amount of feed required to produce each kilogram of carcase is also improving over time, particularly with advances in nutrition and genetics. This can be seen in the drop from 3.66kg to 3.50kg of feed needed to produce a kilo of pigmeat, as shown in Table 3 below. This is a substantial improvement in efficiency of feed usage (mainly as a result of the extra output per sow). In 2000, it took 143 days from the time of weaning to reach the sale weight of 90.1kg liveweight. In 2020, it took 147 days after weaning to reach the sale weight of 115.3kg. The improved growth rate has driven output substantially. Management of animal health and biosecurity (disease prevention measures) has also greatly improved on farms, and this has contributed to the performance gains. 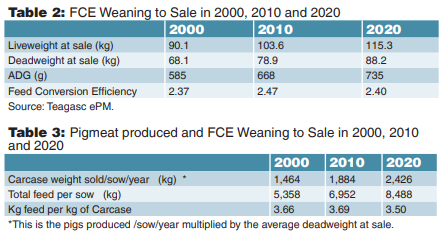 •The pig sector in Ireland is not very intensive at a national level. There are around 148,000 sows in the Irish national herd. In The Netherlands, there are six times as many sows in an area the size of Munster.

•The pig sector uses over 8t of feed per sow plus progeny each year. This requires 1.1m tonnes of feed for the sector. Cereals would make up 70% of this figure.

•Pigmeat is the most consumed meat in the world. In Ireland, 28kg of pigmeat is consumed per capita each year

Performance on pig farms is forever changing, as new processes and technologies are developed over time. Farmers must constantly assess their production model and adapt to changes in performance to optimise the profitability of the business, be they in genetics, nutrition or elsewhere on their farms, just like every other farm enterprise.

Find out more from Teagasc about Pigs here

We really encourage all pig producers to gather all staff together to view this lunchtime event. You can login to this event on whatever device, phone, tablet or computer, that is most convenient for you.