Breeding from ewe lambs –an opportunity to increase flock profitability


The cost of a replacement ewe joining the flock at 18 months is equivalent to 25% of the value of lamb carcass output that she produces in her lifetime. One option to cut replacement cost is to join ewe lambs to lamb at one year, with the aim to increase lifetime productivity, Dr. Tim Keady outlines

Replacements are a major cost in mid-season prime lamb production systems. The cost of a replacement ewe at joining the flock at approximately 18 months of age is equivalent to 25% of the value of lamb carcass output that she will produce during her lifetime. One option for reducing replacement costs is to join ewe lambs to lamb at one year of age with the objective of increasing lifetime productivity.

The “ram effect” can be used to induce ewes (ewe lambs or adult ewes) to start cycling provided they are sufficiently close to the time of onset of normal cyclicity but have not entered their breeding season. In practice the ram effect can be employed to ensure that all ewes in the flock are at the stage of exhibiting overt oestrus during the first 17 days of the joining period. For the “ram effect” to work the ewes should have not been in contact (either sight or smell) with rams for the previous month.

The “ram effect” is summarised in Table 1. Fertile rams should be introduced to the flock 14 days after the rams used to induce the ‘ram effect’ were introduced; the peak mating times will be 4 and 9 days later.  The reason the rams are introduced at day 14 is to allow for any short cycles and to pick up any individuals that were already cyclic at the time of ram introduction. 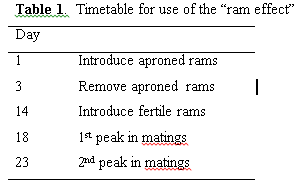 At Athenry when the “ram effect” was used all ewe lambs were raddled during the joining period. Also the lambing season was compact with 62 and 84% lambing within 2 and 3 weeks, respectively.  This clearly illustrates that the “ram effect” synchronised lambing.  When using the “ram effect” to synchronise the mating season it is essential to have an adequate number of rams for mating (1 experience ram per about 30 ewes). It is essential to have adequate facilities - especially lambing pens (1 pen per 6 ewes) and labour- to cope with the flock during the lambing season.

Effect of weight at joining 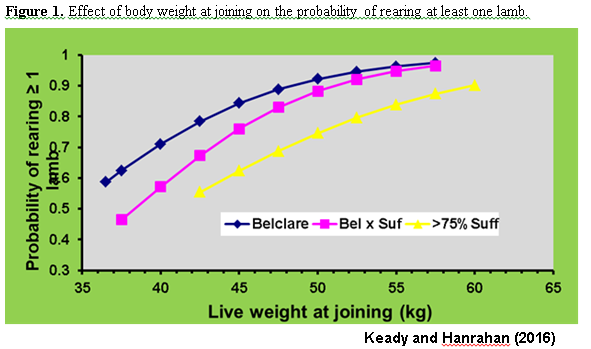