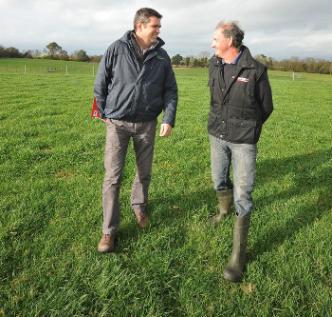 Peadar operates a high output mid-season system with ewes lambing in early March. The farm itself consist of 27 ha of free draining ground  split into 2 separate grazing blocks – the home block of 10.5 ha and an out farm of 16.5 ha near the Louth-Monaghan border.  As the farms are 2 km apart by road moving stock between them on a regular basis is difficult. As a result each block is stocked accordingly with separate groups of ewes and lambs from turnout onward. The only stock that move between the blocks pre-weaning to balance out supply and demand is in the form of the replacement hoggets that are ran dry during the first year.

Paddocks on the Farm

To manage this high stocked operation Peadar has invested in grazing infrastructure over the years. The farm is currently split into 14 permanent divisions with an average paddock size just shy of 2ha. For a large part of the year these paddocks are further sub divided using temporary fencing in the form of 3 strands of poly wire or flexi net which is erected on a semi-permanent basis from early April. Whereas this may seem laborious to some it gives Peadar greater control allowing him to better manage supply and increasing grass production and reducing residency periods which has a positive effect on lamb performance. Peadar is firm believer in measuring and managing performance. All lambs on the farm are EID tagged as part of the Teagasc BETTER farm programme and Peadar is also a participant in the OviData project with Sheep Ireland so the performance of the flock is measured on a regular basis.

Peadar’s attention to detail was reflected in this year’s lamb crop with high levels of performance achieved from a grass based system. Peadar weaned in late June with the performance summarised in Table 1. The single, twin and triplet (reared as twins) lambs were on or close to the targets for the system. By weaning 31 of these lambs were drafted for sale through the Monaghan lamb producer group which Peadar is a long term member of, his aim is to produce a 20 kg lamb carcass during the early part of the grazing season increasing as it progresses.

Once weaned Peadar leaves the lambs in their respective groups for a week to settle in before splitting the male and female lambs. The male lambs are split into 2 groups those over 35kg are drafted into a ‘finishing group’ that’s supplemented and those under are left grow on at grass. The finishing group is grazed on the home block and are followed by the dry hoggets.

Ram lamb finishers -  A total of 107 ram lambs were drafted into this finishing group following weaning. These lambs are supplemented with concentrate at a rate of 400 to 500g fed once a day in troughs. By supplementing a smaller number for a shorter period helps reduce the overall concentrate bill whilst maintaining performance of these lambs ensuring regular drafting, by the end of July over 40 were sold from it with the others due to follow suit by mid-August. The second group of ram lambs are managed on the out farm on a grass only diet the idea being that they grow on as cheaply as possible. They will be drafted into the finishing group once they reach 38 kg, the entry requirement for this group increases in line with increases in drafting weight i.e. within 7 to 10 kg of finish.

The ewe lambs - are managed as one grazing group on the out farm up until early August at which point Peadar then splits off the replacement ewe lambs from the main batch. He also drafts off the lightest ewe lambs, generally 25 to 30 lambs each year and grazes these alongside his replacements. Over the past number of years Peadar has ran these light ewe lambs on for the winter, finishing them the following spring as hoggets. This approach suits his system and has benefits for cash flow in spring which like most sheep farms is generally a period of limited sales. However, it has also provided a more suitable market for these lower performing lambs. It has allowed these them to grow on and sell into a higher priced market in spring which better covered the cost of more intensive finishing in the final stages.  The remaining ewe lambs are managed as one bunch, Peadar sells a proportion of these at home each year for breeding to repeat customers during August with any unsold lambs finished by October.

Aside from sales Peadar will also look at purchases as he has to replenish his ram team for this autumn with a number of new terminal sires needed this year. He hopes to get these bought in early to quarantine treat them and give them time to acclimatise to the new surroundings. Another vital part of the autumn preparation on the farm will focus on building grass covers as August progresses. The grazing ground will receive a split application of protected urea during August to boost supplies as he begins to set up his autumn grazing rotation. Peadar is aiming to have 25 days grass ahead of the flock by the start of September.