Dominika Krol and Aude Mancia, Teagasc Research staff, look at the main emissions, including nitrous oxide, from sheep production. They discuss their promising initial results, as well as ways to further reduce these emissions.

Agricultural emissions are divided into two main categories-greenhouse gases and air pollutants (Fig. 1). Greenhouse gases (GHG) have negative impact on climate change and agriculture contributes over 30% of our national emissions. The gases are methane (CH4), nitrous oxide (N2O) and carbon dioxide (CO2). In agriculture the first two are the most important. Methane represents around two-thirds of all emissions and nitrous oxide the other one-third.

The other type of emissions are air pollutants like ammonia (NH3). Ammonia is a gaseous form of nitrogen, which negatively impacts on human and animal health while also damaging ecosystems. In Ireland agriculture is responsible for 99% of all ammonia emissions.

Sheep excreta as a source of a greenhouse gas nitrous oxide

Nitrous oxide is a very prominent GHG originating mainly from agriculture. It is naturally produced by soils, through microbial activity, which is moderated by nitrogen inputs to the soil and by surrounding environmental factors. Ruminants such as sheep have poor nitrogen use efficiency and excrete between 70 and 95% of ingested nitrogen. Due to these large nitrogen inputs, sheep excreta patches represent hotspots for nitrous oxide production. In sheep production systems, excreta deposited during grazing can be a major source of nitrous oxide, however these emissions have never previously been measured in Ireland. As ruminant grazing systems represent the dominant agricultural activity in Ireland and grasslands account for approximately 60% of total land use, it is important to accurately estimate nitrous oxide emissions associated with excreta deposition of grazing ruminants. 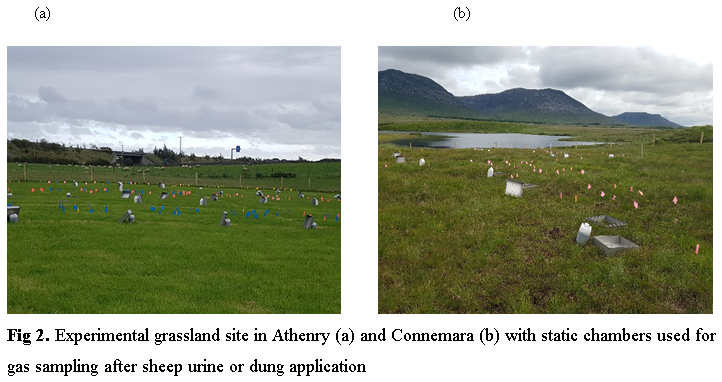 Initial research results are promising and indicate that sheep excreta deposited on grasslands do not to contribute as much nitrous oxide as previously estimated using international data. However, emissions are still a concern for overall sustainability of the sector. There are number of ways to further reduce emissions such as through improved animal health, soil fertility and nutrient use efficiency, and grazing management.