The O'Leary farm in Kerry was traditionally sucklers and sheep. They joined the Teagasc BETTER Sheep Farm Programme with the aim to increase performance and profitability of both their sheep and cattle enterprises. Today they run a mid-season ewe flock and contract rearing enterprise.

Michael Gottstein, Head of Sheep KT Programme, Teagasc outlines the progress of the O'Leary family farm since joining the Teagasc BETTER Sheep Farm Programme. Tomas O’ Leary, his wife Eileen and Children Míchéal, Yvonne and Sinead farm just over 40 adjusted hectares in two blocks of land in Kerry. Traditionally a suckler and sheep farm, the O’Leary’s joined the Teagasc BETTER Sheep Farm Programme in 2013 with the aim of increasing the performance and profitability of both their sheep and cattle enterprises. Today the farm runs a mid-season ewe flock (210 mature ewes and 50 ewe lambs) in addition to contract rearing 90 Friesian Cross Heifers. The suckler cows and finishing cattle enterprises were replaced in 2018 with a contract rearing enterprise to reduce market volatility and increase margins. This year ewe numbers have been reduced by 60 head from 320 to 260 to better match stocking rate to grass supply and ease the pressure somewhat.

The home farm is situated in Readrinagh situated approximately 3km north of the village of Barraduff and consists of approximately 13ha of heavy, difficult land which is primarily used for silage production (2 cuts) and some grazing with ewes in the spring and autumn/winter. The ewes are housed on the home farm for the winter period. The second block of land is situated in Rosnacarton Beg (approximately 12km NW of Killarney) and consists of approximately 27ha of good dry land. This block of land is 27km distant from the home farm and is the main grazing block for both the cattle and sheep with occasional surplus grass removed as silage when growth allows. In 2020 this block is on target to grow 15T grass dry matter per hectare which has enabled it to carry all the grazing animals for the main grazing period. This block also contains the cattle housing which means a daily round trip of 55km for Tomas daily to feed and check stock.

The target for the O’Leary farm is to achieve a litter size of approximately 2.3 lambs per mature ewe with lambs weaned per ewe joined of around 2 lambs per ewe. The 50 ewe lambs generally perform somewhat lower scanning around 1.7 – 1.8 and weaning around 1.4-1.5. In a nutshell the aim is to produce around 470 – 500 lambs available for sale and to select replacements from the 260 ewes put the ram annually. Achieving this level of output it is a combination of the correct female genetics (in this case a Belclare x Suffolk or Texel ewe), coupled with suitable high performance terminal genetics (rams selected for lamb survival and days to slaughter) and having ewes in good body condition at mating time. 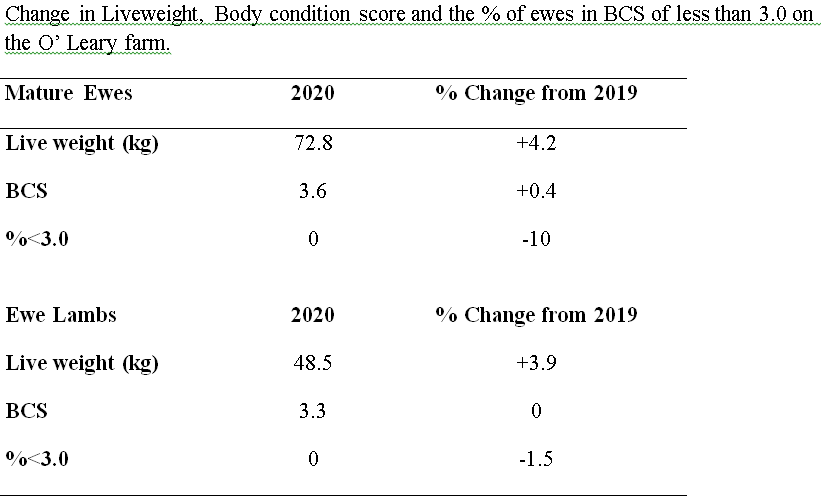 You can watch a short video clip in which Tomas discusses his breeding programme on the following link http://bit.ly/SBPOLeary