Francis Gonley and his family run an all sheep farm on the outskirts of Sligo town. The farm is part of the Teagasc BETTER Farm Sheep Programme. Damian Costello, Teagasc Sheep Specialist, reports the latest on sheep performance and farm plan progress.

The land on the home farm (17.9ha) is largely good quality but can be described as a heavy soil type. It accommodates the lowland ewe flock which he has been steadily expanding in recent years. In the most recent breeding season, 75 mature lowland ewes and 43 ewe lambs were joined with the ram. The out farm, which is 8km from the home farm, is located on Benbulben in the picturesque area near Glencar Lake and the famous Glencar Waterfall. This block is home to a 190 ewe Scottish Blackface hill flock and comprises reasonable quality green ground (18ha) adjoining a large area of commonage of which Francis has a 72.5ha share.

Since joining the Teagasc Sheep BETTER Farm Programme in 2017 both hill and lowland numbers have been climbing steadily. Lowland flock numbers were increased by breeding replacements from within the existing flock comprising mainly Suffolk and Texel cross ewes. The best performing of these were crossed with high genetic merit Belclare sires aiming to produce prolific replacements. This is having the desired effect with number of lambs reared per ewe joined increasing which in turn has led to profitability moving in the right direction. With limited numbers of hill ewes suitable to breed from, Francis decided to build hill ewe numbers by purchasing Scottish Blackface replacement hoggets from known sources for the last number of seasons. A biosecurity protocol is implemented for all sheep coming onto the farm. The plan now is to close the flock and to produce homebred ewe replacements for the hill flock.

The lambs were weaned from lowland mature ewes in late June with 14 weeks weight of lambs being recorded. The ewe lamb group lambed at the same time as the hill flock (from early April on) and are due to be weaned soon. Lambs produced by mature ewes have performed well with average daily gain from birth to weaning at 14 weeks averaging 306g/day, 278g/day and 266g/day for lambs born as singles, twins and triplets respectively. No lambs were reared as triplets with surplus lambs being either cross fostered or artificially reared. It is useful to look at the percentage of lambs falling into different weight categories at weaning (see Table 1 below) with just 13% under 25kg in this case.

Potential ewe lamb replacements were identified at weaning and the plan is to finish most of the remaining lambs with a small number of ewe lambs surplus to requirements being sold on for breeding. Weaned lambs are currently being grazed on good quality grass allowing them to graze down to 5 - 6cm before moving them to fresh pasture. The ewes are a follower group grazing paddocks out to 4cm. Factory fit lambs will be drafted fortnightly. Depending on grass availability and performance of lambs on grass only diet, concentrates are introduced strategically. Usually a finishing group is formed with lambs 38kg and over being offered good quality grass supplemented with 300 to 500g/head/day concentrates. 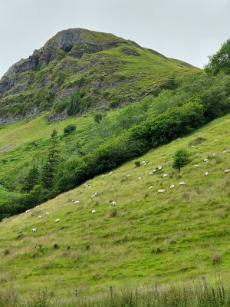 The lambs are due to be weaned from hill ewes around now and as with the lowland flock all lambs will be weighed at weaning. The lambs will then be taken to the home farm to get them settled post weaning as well as getting them to help to deal with surplus grass covers. Once settled ewe lambs being kept as replacements will return to the green ground on the hill farm. The plan is to also finish a good proportion of the hill lambs on the home farm with the remainder being sold as stores at the local mart. The ewe flock will return to the hill for now with any thin ewes to be kept on green ground with the aim of regaining body condition before the breeding season. Since joining the programme Francis has been improving the green ground on the hill farm by addressing soil fertility as well as mechanical and chemical control of rushes. Internal boundaries have also been repaired to give him five separate grazing divisions on the enclosed green ground.

Francis has recently agreed to participate in the Teagasc Signpost programme as one of a national network of signpost farms crossing all farming enterprises. He looks forward to implementing the science based technologies on his family farm that can reduce agricultural emissions.