There are 24 sites with 31 participants in the project. All land in the project supports peatland habitats such as dry and wet heath and upland blanket bog which are rare and protected habitats. Each site is assessed by the project ecologist who devises a detailed annual work plan with the famer. The assessment considers the ecological integrity of the site in terms of the diversity and structure of the vegetation and the pressures and threats. An annual assessment is carried out and farmers are incentivised to improve the habitat condition (through specific actions in their annual work plan) as they receive a ‘results-based’ payment.

Habitat scores range from 15 to 100, averaging 51 (Fig.  1). While the number of positive indicator species was good across the majority of sites, vegetation structure and moss coverage was frequently poor to moderate. The majority of sites are primarily sheep grazed resulting in preferential grazing on dwarf shrubs, over less palatable species such as purple moor-grass or molinia, gorse and rushes. Uncontrolled burning to manage these less palatable species is contributing further to the deterioration of these habitats. The project is addressing this imbalance by introducing the concept of controlled dual grazing using both sheep and cattle. Controlling sheep numbers to allow dwarf shrubs to recover and introducing light summer grazing using suitable breeds of cattle such as Droimeann, Kerry or Dexter, which graze coarse vegetation can improve the vegetation structure of these habitats and the grazing condition of the land. Controlled dual grazing was undertaken in six sites during the summer of 2020 and initial results are very positive with landowners commenting on the grazing potential and improvement in the condition of cattle. 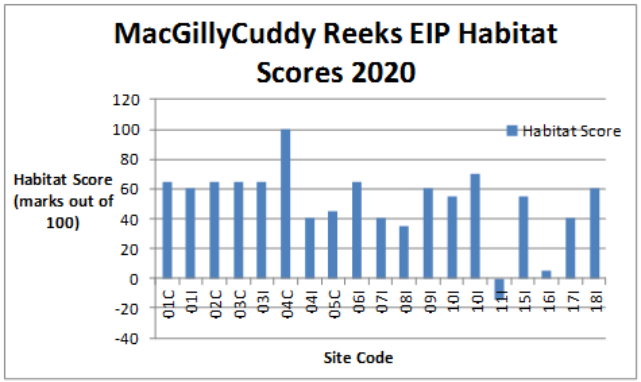 Figure 1 Habitat scores (2020) for sites in the MacGillycuddy Reeks EIP.

Bracken is present on 14 sites and the cover ranges from 5 % to 75%, averaging 30% (Fig. 2). Treating bracken under the project has three options: knapsack spraying; cutting twice during the growing season; and trampling with cattle. Knapsack treatment is onerous, and group work is strongly encouraged. Access to water for spraying can be a constraint in this difficult terrain. The project is supporting landowners by using a ram pump to fill water barrels placed close to bracken stands where needed. A B&B system has been set up to give farmers the option of obtaining cattle for short periods to trample bracken, rather than purchasing them.

Figure 2  Baseline cover of bracken for sites in the MacGillycuddy Reeks EIP project.

Rhododendron is present on ten sites with the area ranging from 0.2ha to 27.3ha averaging 11.1ha. Based on Barron’s criteria (Barron, 2009), the degree of rhododendron infestation for each site is shown in Fig. 3. Under the project two options are used for the   control of the invasive alien species rhododendron. Stem treatment is used for younger plants using a hatchet to make shallow downward cuts in the bark approximately 2-3cm apart around the base of the trunk and applying the herbicide glyphosate including a blue marker dye on exposed bark to identify treated plants.   Number of cuts varies depends on stem thickness.  Cuts below the last branch ensure the herbicide gets to all areas of the plant. Results of treatment are seen quickly during growing season, although treatment can be carried out all year round, except in extremely wet weather when herbicide could be washed off. Stump treatment is used for dense mature thickets, where plants are cut close to the ground using a chainsaw and the stumps treated with herbicide.

The tradition of sheep farming in the MacGillycuddy Reeks EIP project is strong at present but needs to be supported to ensure its viability into the future. The habitats in the Reeks are threatened due to a variety of factors including single-species grazing, economically unviable labour-intensive practices and invasion by bracken and rhododendron.

The project has been tackling these issues on a number of sites through the introduction of controlled dual grazing, bracken management and rhododendron treatment. Initial results have been very promising both in term of the success of the actions and in terms of the willingness of participants to engage with actions and the over-arching objectives of the project. The lasting success of these actions is dependent on ongoing monitoring of grazing levels and the provision of ongoing resources to control the bracken and the rhododendron in the long-term. The sites selected for the project cover a relatively small proportion of the land area within the Reeks.  A dedicated agri-environmental programme covering the entire Reeks area, if adequately resourced, would undoubtedly play an important role in managing, conserving, protecting and enhancing this highly valued landscape for tourism, biodiversity and farming.  Without ongoing intervention, the continued spread of invasive alien species will lead to significant deterioration in habitat quality and loss of grazing area in the future.