The Hill Sheep Sector in Ireland


The Irish Hill Sheep sector plays an important role in the economic health of rural economies and the maintenance of the natural landscape in many of Ireland’s most scenic areas. Hill sheep are a very hardy and resilient breed. Michael G. Diskin and Frank Campion, Teagasc Athenry tell us more.

The Irish Hill Sheep sector plays an important role in the economic health of rural economies and the maintenance of the natural landscape in many of Ireland’s most scenic areas. Along the western seaboard, in Waterford and in the Cooley Peninsula the Scottish Blackface ewe dominates. The Cheviot, as a pure breed, is most popular in Wicklow with the Scottish Blackface gaining popularity in this area in more recent times.  Different strains of the Scottish Blackface (Mayo-Connemara, Lanark, Perth,Tírconnell) have gained popularity in different parts of the country and with different producers. Hill sheep are a very hardy and resilient breed and are hugely responsive to improved nutrition.

The productivity of hill sheep, measured in terms of the number of lambs weaned per ewe joined,  varies (0.7 to 1.2)  significantly reflecting harshness of the hill environments and the amount of green in bye land available. Unlike, the situation in lowland flocks where ewes are predominately crossbred, purebred ewes dominate in hill flocks.  In many flocks, particularly, where the weaning rate is low, the primary objective from the lamb crops is to provide sufficient flock replacements with males generally sold as stores shortly after weaning

The hill ewe has a significant untapped potential both in the hill environment and as the dam of prolific cross bred ewes for the lowlands. In many of the better hills  and marginal land areas there is scope to increase the level of cross breeding to maternal breeds such as the Belclare of Blue Leicester to produce prolific replacement females for lowland flocks or to terminal breeds (Texel, Suffolk and Charollais)  to produce lambs for slaughter. Crossbred lambs are typically 3-4 kg heavier at weaning than pure Scottish Blackface lambs and also produce faster growing lambs with better carcass conformation when subsequently finished off grass, forages or on all-concentrate diets.

In some of the mountain and hill areas producer groups have been successfully established to produce prolific crossbred replacements for subsequent fat lamb production on lowland farms. Other such producer groups have been established to market male lambs either as stores or directly for slaughter. There is scope for further expansion of such initiatives and the certification of the health status (vaccinated, shorn, dosed, and dipped) of both male and female lambs from such groups would further enhance their value and attractiveness to lowland buyers.

For male hill and crossbred lambs, recent Teagasc, Athenry data would strongly suggest that it is important to move these lambs to good lowland pasture as early as possible after weaning to maximise the live weight gain from pasture and minimise the amount of concentrate feed required to finish such lambs.  This research has shown the potential to finish hill bred male lambs to carcass weighs in excess of 18 kg while meeting market conformation  and fat score specifications satisfactorily though the period of feeding is prolonged particularly for lambs that are light at weaning.

More recent studies were extended to finishing hill lambs to comparatively lighter carcass weights (12-15 kg) following short-term intensive feeding.  This latter research has provided a stimulus for the establishment of the producer group and blueprint for finishing these “light lambs”. This option is now been widely adopted by primary hill lamb producers from Kerry to Donegal who are now marketing their lambs directly to the factory. It is estimated that about 35,000 of such “light lambs” have been marketed in the past two years with an projected return of €15-20 /lamb. The development of this outlet for hill lambs has also established an improved floor price for the remaining hill store lambs. Linking into the Bord Bia Lamb Quality Assurance Scheme will enable lamb to be sold on the higher priced premium markets.

As with any intensive finishing system this requires good flock management to keep mortality rates low and ensure lambs are drafted at the correct weight to avoid selling lambs that are too light or don’t have sufficient muscle and fat cover to meet market specifications.

There is scope to produce more health-certified prolific replacements lambs or store lambs for further finishing from hill flocks. 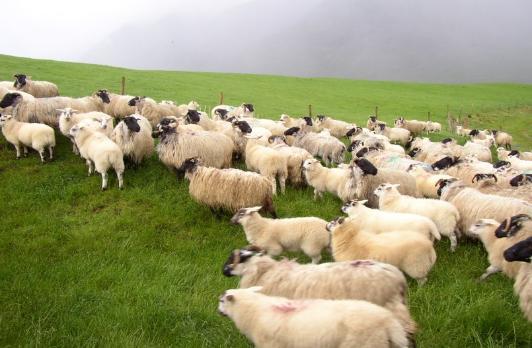