The Teagasc BETTER Farm hill sheep flocks weaned their lambs in recent weeks Frank Campion, Teagasc Sheep Researcher outlines the importance of getting lambs weaned on time, to allow decision making on selling lambs and to allow the ewes sufficient time to recover condition before mating

Overall the performance of the flocks was good with average daily gain from birth to weaning with single born and reared lambs on par with last year.

The decision on how best sell male lambs and any female lambs not selected for replacement ewes usually circles around three key variables for the flocks; what weight are the lambs, what grass is available on the farm outside of what will be needed for the ewe flock and what store lamb prices are.

This year has seen a comparatively strong price for store lambs in almost all areas across the country making the decision to sell lambs as stores a relatively straight forward one for most of the flocks. However, for a couple of the flocks in the programme where there is sufficient grass and facilities available to finish lambs and there are other benefits to the farm to keeping a proportion of lambs to finish then consideration needs to be given to finishing some lambs on the farms also.

As presented in Table 1 the breakdown of lamb weights will vary hugely depending on the average weaning weight of the flocks. The scenario’s presented below are based on two of the BETTER farm sheep flocks that lambed outdoors in April, had lambs on the hill during the summer and weaned on the 14th of August. For flock A most of the lambs are less than 30kg meaning getting them to weights over 35kg where finishing off concentrates will become a potentially viable option is going to take a lot of grass. In this situation most of these lambs will need to be sold as store lambs even if prices drop back to levels more typically seen at this time of year.

Flock B had a higher average weight at weaning and as can be seen has a high proportion of the lambs above 30kg and the option to potentially finish lambs where grass is available is an option if the economics of it can be stacked up against the store lamb price achievable. Achieving the level of performance from a hill flock demonstrated by Flock B in Table 2 is a result of having a consistent breeding policy, cross breeding an appropriate proportion of the flock and managing the hill to ensure it is in good grazing condition for ewes.

Table 1. Breakdown of % of lambs in different weight categories at weaning from two of the Teagasc BETTER hill sheep flocks

An example of a typical store lamb budget that will be used by flocks is presented in Table 2. This is based around data generated from the Teagasc store lamb calculator which is available here and is for a 30kg Scottish Blackface ram lamb that would be housed in early October for finishing and would make making €2.00/kg as a store currently. This example assumes the lamb still needs to be dosed and vaccinated and that lambs will need to be housed quickly to conserve grass for ewes. Every farm is different and it is important that farmers look at their own circumstances when making these decisions. Where store lamb purchasers are concerned then the availability of grass in the autumn and the option to bring lambs into heavier carcass weights will make finishing a more attractive option.

Table 2: Sample budget for calculating the return on finishing store lambs on farm on an all-concentrate diet. 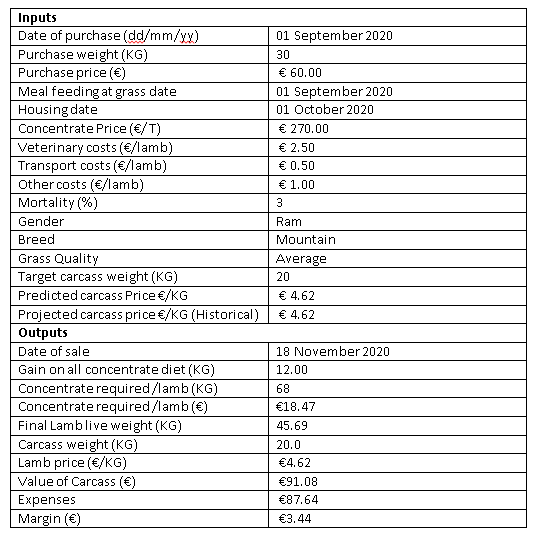 Strong grass growth rates were recorded across the Teagasc Lowland BETTER Farm Sheep farms in July and August. However, high levels of rainfall in recent weeks is making utilising grass difficult on some of the wetter farms. The flocks are generally happy with how drafting is proceeding with drafting rates vary across the flocks are ranging from approximately 28% up to 60% as of third week of August. Stocking rate and pre-weaning performance accounts for some of the variation but most flocks will see these rates increase rapidly over the next couple of few weeks.

Concentrates have been introduced to ram lambs on most of the farms with general policy across the flocks being to select off the heavier ram lambs over 35-38kg and feed them while they are still grazing as opposed to feeding all lambs at this stage. On one of the higher stocked farms where lamb performance up to weaning was lower than anticipated some of the lighter lambs are also being fed.

The lowland flocks will aim to be mating ewes for lambing next March meaning mating time is fast approaching. All of the flocks have gone through there ewe flock at this stage and marked any thin ewes. These ewes have either been pulled out and put with the ewe lambs or put in group where they are getting access to good quality grass and not being forced to graze out paddocks to allow them to regain body condition.

An important part of marking these thin ewes is to cull any of them that fail to re-gain condition before mating as these ewes will most likely fail to perform and potentially indicates an underlying condition.