Part of a series of webinars aimed at Irish pig producers 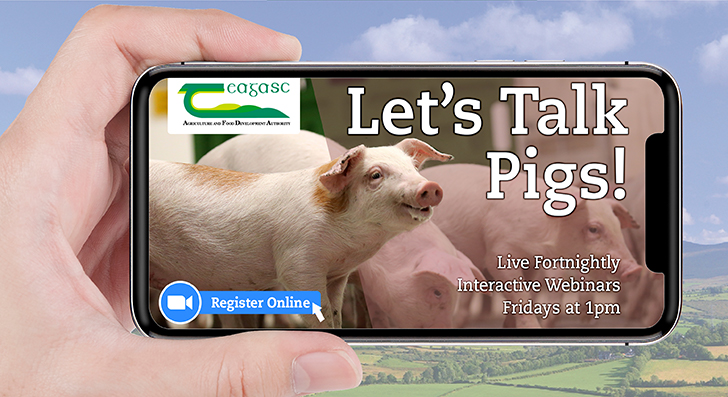 The fourth in a series of fortnightly webinars aimed at Irish pig producers will focus on "Rearing pigs with intact tails" with Mirjam Lechner.

Mirjam Lechner hails from a farming background in the Franconian region of Northern Bavaria in Germany. After studying agriculture at the Triesdorf-Weihenstephan University of Applied Sciences, she went on to complete a Master’s Degree and built up a strong background in pig production spending time working in a slaughter house and managing a piglet rearing farm. Mirjam now works alongside her husband in an advisory role to companies specialising in hygiene and animal welfare. She also works alongside producers and has been working for over ten years as a consultant on animal welfare and providing training on behavioural disorders in pigs to a large producer group in Germany. Her areas of expertise include management of drinking water, provision of enrichment for pigs and the management of metabolism and feed to prevent behavioural disorders.

Mirjam is currently working with the Swine Clinic Gießen and Professor Habil Reiner in research on SINS (systemic inflammation and necrosis syndrome) a new syndrome related to tail biting in pigs. She has worked on a number of publications relating to tail, ear and claw lesions in pigs in recent years and she is currently the project manager of the ‘Coaching Systems: Pig Signals’ project, a European Innovation Partnership Project (EIP-Agri) in Baden-Württemberg, Germany. Part of this work recently saw the launch of the FitForPigs App, an information resource to support pig producers in the area of animal health.