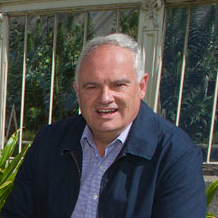 The Teagasc Authority has appointed Colm Dockrell as Assistant Principal at the Teagasc College of Amenity Horticulture, National Botanic Gardens, Dublin. He had joined Teagasc in 2009 from the Warrenstown Horticulture College, where he had taught for 30 years up until its closure in that year.

While in Warrenstown, he delivered a diverse range of horticulture courses and occupied the roles of Assistant Principal for 9 years and Acting Principal for 1 year. For 12 years, between 1998 and 2000, he worked as a part-time fruit adviser with Teagasc, supporting growers in the north Leinster area. During this time he had a key role in the development of new systems for protected soft fruit production and the establishment of the producer group Leinster Fruit Growers where he served as director for six years.

He began his formal training in Horticulture in Warrenstown College, and then qualified with a Degree in Horticulture from UCD. He has a keen interest in turfgrass and in 2011 he completed a Masters in Agronomy at the University of Lincoln, Nebraska, USA, under the supervision of Professor Roch Gaussoin.

Speaking on his appointment Colm said: “I am looking forward to the new challenges that the role of Assistant Principal will present, and I have a particular interest in developing new work-based courses at the college and delivering a range of Continuous Professional Development (CPD) training for the horticulture industry.”

Congratulating Colm on his appointment, John Mulhern, Principal at the Teagasc College of Amenity Horticulture said: “Colm has a long track record of delivering horticultural education in Ireland, having worked in Warrenstown College for thirty years and having spent the last six years in the Teagasc College of Amenity Horticulture at the National Botanic Gardens, delivering a wide range of modules on turfgrass, plant protection and general crop production. In particular his expertise in sustainable methods of sportsturf construction, maintenance and Integrated Pest Management (IPM) has been extremely valuable for students.”