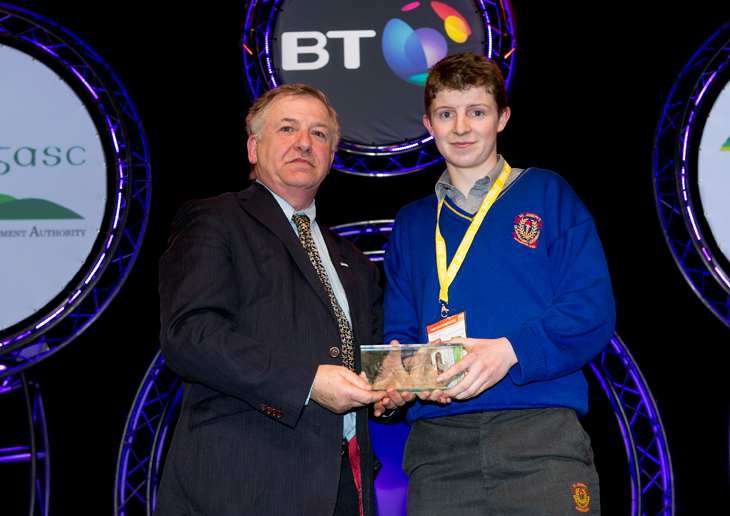 Jack O'Meara, from St Joseph's College, Borrisoleigh, Co Tipperary winner of the Teagasc special award at the BT Young Scientist & Technology Exhibition 2016 (BTYSTE 2016). Jack’s project ‘The Mastitis Meter’, which was entered in the Chemical, Physical & Mathematical Sciences category, looked at the early detection of mastitis of milk in the parlour. He looked at the increased conductivity of infected milk and proposed a device that would test samples of milk for increased conductivity before it enters the bulk tank.

Jack’s award was sponsored by Teagasc for the project that best demonstrates a thorough understanding of the science of agricultural or food production, or the use of science to improve technologies available to agricultural or food production. Almost 1,200 students from across the island of Ireland covering 550 projects from 29 counties competed in the RDS at the event.

Teagasc Director, Professor Gerry Boyle congratulated Jack O’ Meara on winning the Teagasc award at the young scientist exhibition. “Mastitis is an issue that every dairy farmer in the country can relate to, and any new way of detecting it in dairy cows could help farmers in their day to day management of their cows. I would also like to congratulate all students who exhibited at the event and I was very impressed with the standards they achieved in their projects.”

Dr Frank O’Mara, Director of Research, said that Teagasc is proud to support the young scientist exhibition: “We all benefit from raising students’ awareness of the importance of Science, Technology, Engineering and Mathematics (STEM) careers and the career opportunities from taking STEM courses”.

Over 60,000 visitors attended the event which took place at the RDS, Dublin January 7-9. Visitors to the Teagasc stand met research and teaching staff and learnt about the Irish Soils Information system and Sensory Food Network Ireland. 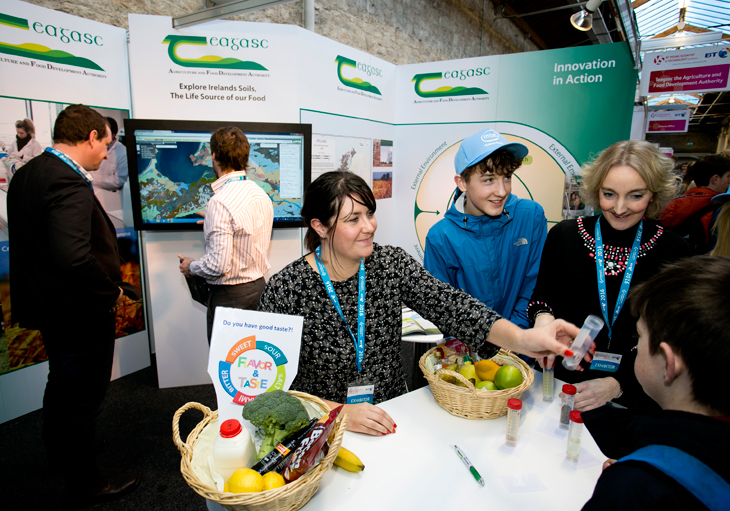 Teagasc staff at the World of Science and Technology Hall at the BT Young Scientist & Technology Exhibition 2016.