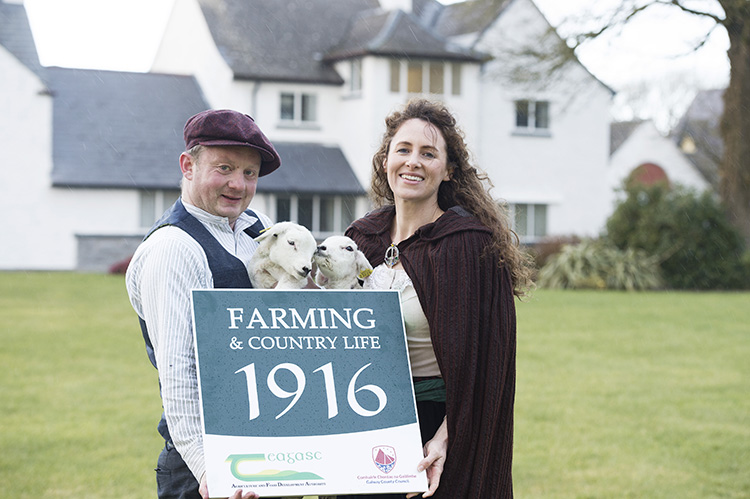 Teagasc in partnership with Galway County Council will stage, Farming and Country Life 1916, Ireland’s largest rural 1916 commemorative. The event will take place at the historic Mellows Campus, Athenry on 10th and 11th June.

Speaking at the launch of the event, Prof. Gerry Boyle, Director of Teagasc said “This will be the most significant 1916 commemorative event to take place in rural Ireland. I want to acknowledge the enormous cooperation we have received from all of our collaborators. I also want to acknowledge our title sponsor, FBD, who have been extremely supportive of this project”.

The event will be a free to attend and will appeal to a wide audience from children to grandparents, urban and rural, farm families, schools, the Diaspora and visitors to our country. The site will incorporate picnic areas and a packed schedule of entertainment for all ages. The expected attendance is 50,000 making it the largest 1916 commemoration to be hosted outside of Dublin.

The event will reflect on an important part of life in Ireland at the beginning of the last century. It will provide high quality educational, authentic and will accurately retell the story of local 1916 military events and Farming and Country Life of the era. It will showcase a significant number of interactive exhibits, dramatic re-enactments, lectures, and reconstructions.

A large number of farming, rural, community and voluntary, local and national organizations will be participating in the event including IFA, GAA, National Ploughing Association, UCD and the ICA, the Museum of Country Life, the Agricultural Museum in Johnstown Castle, The GAA Museum, the Department of Folklore in UCD and with many local heritage and historical societies.

There will be a series of highly interactive villages that will explore all aspects of farming and country life in Ireland 100 years ago and will chart the major developments in the first half of the 20th century. The event is being organised around seven thematic villages: