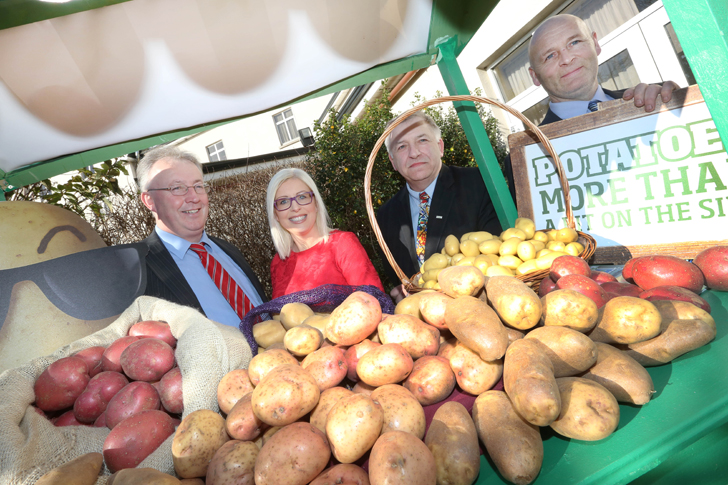 Market Research by Kantar Worldpanel unveiled at the National Potato Conference in Dublin today is seeing positive value and volume growth for the first time in seven years, as shoppers are returning to buy more often - making 34 trips in the year. However, the volumes they buy on each trip still haven’t recovered to 2007-8 levels. In 2007, potato volume purchased by the average Irish household was 140kg per year, in 2015 that had fallen to 119kgs.

Farmers and industry from across the country attended the National Potato Conference and Trade Show today, organised by IFA, Teagasc and Bord Bia in Dublin.

Bord Bia, in conjunction with the Irish Farmers’ Association and the Irish Potato Federation, has embarked on an EU and industry funded three year promotional campaign for potatoes, Potatoes: More Than A Bit On The Side, which aims to increase the consumption of potatoes and specifically targets 22-44 year old females.

IFA National Chairman Jer Bergin welcomed the joint initiative with the UK, which is funded by growers, packers and the Department of Agriculture. “This investment by growers is important for their future and must deliver a greater market return for potato producers. The potato industry is worth nearly €80m at farm gate. This year growers have experienced a better year, but only relative to the disastrous prices of the previous two”.

Lorcan Bourke, Sector Manager for Potatoes at Bord Bia, said: “This collaborative initiative will see potatoes presented as a naturally fat and gluten-free ingredient, that can be used in many different ways and for a variety of occasions, to positively change the perception of younger consumers about potatoes and show that they are indeed, as the campaign name highlights, more than a bit on the side”.

Respected dietitian, Aoife Hearne, speaking at the conference, commented: “For health and weight loss, we really need to move away from the idea that following a diet is the best approach, and instead move to a place where we are focusing on wellness, eating intuitively, and moving towards natural foods. Potatoes, a non-processed carbohydrate, are a great example of a natural, fat-free, gluten-free and nutrient-rich food that more people should be including as part of a balanced diet”.

“Unfortunately, ‘carbophobia’ has struck the weight loss market hard – yet what many forget is that carbohydrates provide essential nutrients and much-needed energy for the whole body, but particularly for brain function. It’s important that Irish people rethink their relationship with potatoes, by breaking with their focus on traditional uses and start appreciating them as a low fat meal ingredient for use in a variety of ways – including leaving the nutritious skin on. The Potatoes: More Than A Bit On The Side campaign has developed many delicious, healthy and easy to prepare recipes, to help cook potatoes in much more exciting ways.”

Michael Hennessy, Head of Crops Knowledge Transfer in Teagasc, outlined the Salad Potatoes initiative aimed at increasing the production of salad potatoes grown in Ireland: “The industry has all the elements necessary to increase salad potato production as we have suitable soils, existing infrastructure and a market anxious to sell Irish produce”. He went on to outline the core elements of the initiative and how working with Slaney Produce in Wexford had helped to demonstrate best practice to other growers in 2015.

Fiona Hutton, Teagasc, commented: “Virus in potatoes is a serious problem and can lead to yield losses of up to 50%”. Fiona then outlined virus incidence across Ireland and the control measures necessary, “there isn’t one main virus control technique, as a combination of measures are needed such as clean seed, rouging and chemical control, which are among the most important”.

Dr. Marc Alison, from Cambridge University Farms, NIAB, UK, outlined the relationship between nitrogen and the growth habit of potatoes. Marc emphasised the importance of full canopy cover as soon as possible in the season to capture available light: “Delaying planting will delay emergence and result in reduce yields”. Cultivation practice was also discussed by Marc who gave this advice: “growers have a tendency to de-stone too deep increasing costs and reducing tuber yields”.

For more information on the Potatoes: More Than A Bit On The Side campaign, visit www.potato.ie.