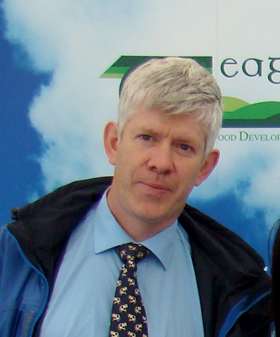 The Teagasc Authority has approved the appointment of David Colbourne as the new Teagasc manager for the Galway/ Clare advisory region. The appointment comes after the retirement of Brendan Heneghan after a long and successful career in Teagasc.

David Colbourne has been working as a Teagasc Dairy Business and Technology adviser, based in Ballyhaise and Bailieboro in County Cavan for the last fifteen years. Before that he was a lecturer in dairy science and farm management at Ballyhaise Agricultural College since joining Teagasc in 1996. In his early career he worked as a secondary school teacher of mathematics and science in schools in Dublin and Wexford.

A native of Birr in County Offaly, David has been involved in organisations like Macra Na Feirme and IFA and has worked on the Teagasc joint dairy programme with Lakeland Dairies. He is a former winner of Gaisce-The President’s Award gold medal.

Speaking after his appointment David Colbourne said: “I am really looking forward to working with the farmers of counties Galway and Clare and with the agricultural organisations in this region, as we deliver our advisory and education programmes to assist them to further develop their businesses. We have a strong team of advisers in this region backed up by the Teagasc specialists and researchers at the animal and grassland and economic research facility in Athenry.”

Congratulating David Colbourne on his appointment, Head of the Teagasc Knowledge Transfer Directorate, Dr Tom Kelly said: “David’s research into understanding farm households and how they change and adapt in the face of economic and policy changes, perfectly equip him to lead the advisory service in Galway and Clare. He has a strong track record in delivering both front line advisory services to farmers and education programmes to students.“