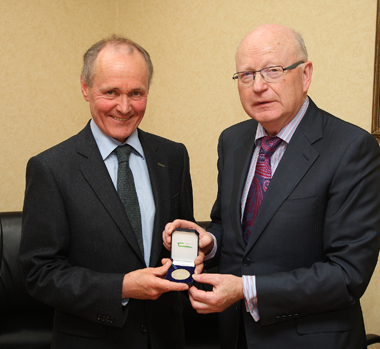 Gold Medal Winner Dr Padraig O’Kiely being presented with his medal by Dr Noel Cawley, Teagasc, Chairman at a meeting of the Teagasc Authority in Oak Park, Carlow

The award was presented to Dr O’Kiely by the Teagasc Chairman, Dr Noel Cawley at a meeting of the Teagasc Authority in Oak Park, Carlow. He said: “Padraig is one of the leading worldwide figures in forage agronomy, conservation, and utilisation. He has published almost 600 scientific papers, over 400 articles in technical and popular farming press and has given over 1,000 presentations to farming and industry conferences and events. He is an editor of five prestigious international peer reviewed journals. His work has stood the test of time and he is one of the outstanding scientists in the organisation.”

Dr Padraig O’Kiely graduated from UCD with a first class honours degree in agricultural science in 1978. He completed a Masters Degree in Agricultural Science after joining An Foras Taluntais, followed by his PhD, all in the area of silage production. His scientific interests are many, but it is his contribution to agricultural research that is of international stature, specifically his contribution to advancing scientific and practical knowledge of forage production, its conservation, and utilisation for livestock production.

A native of county Laois, Padraig was one of the first recipients of a Fulbright Scholarship and spent 1986 on sabbatical at United States Dairy Forage Research Centre on the campus of the University of Wisconsin. He is a past President of the Irish Grassland Association and in 2011 was awarded the Irish Grassland Association Lifetime Merit award. He has been a judge at the Young Scientist of the year competition for over a decade.

Accepting the award, Dr O’Kiely said: “It’s a huge honour and very humbling to receive the award and I would like to thank all the people I have worked with in Grange over the years and in the rest of the organisation. I have always approached my research work to find out the truth and then tell the truth and supply the information to farmers and other people who needed it.”