From 10 shortlisted entries from across Europe, three winners are being revealed at the CommBeBiz Bioeconomy Impact meeting in London on 22 February. The awards are being presented by Professor Tim Benton, one of the three competition judges, who said that the entries and winners provided “a fascinating snapshot of the science being done right across the European Bioeconomy.”
The two other judges involved in the selection of the winners were Philip Lymbery, CEO of Compassion in World Farming, and James Goodchild, an experienced professional photographer.
“We had a great response to the competition, receiving over 100 entries from across 9 European countries,” says organiser of the photo competition, Aine Regan, from Teagasc, a CommBeBiz partner. “The diversity of the bioeconomy is obvious in the ten shortlisted images: marine, forestry, food, agriculture and transformation technologies are all represented. The ten short-listed images from which the three winners were chosen are all visually striking, capture the related research and tell a real story.”
The criteria against which the judges scored the entries were relevance to the bioeconomy, ability to effectively engage both expert and lay audiences in the science shown, creativity of the shot, and the overall quality of the image, considering aspects such as resolution, exposure, composition, colour, and technique. 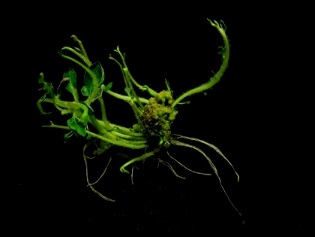 The winning entry from Dheeraj Singh Rathore of Teagasc, Ireland –
One to many: in-vitro regeneration of multiple potato shoots from callus –is an example of a potato cultivar, Desiree, showing multiple juvenile shoot regeneration and root formation as it grew on agar gel. The purpose of this type of cultivation in gel is to develop pest and disease-free plants. The photo urges the viewer to ask what and why

“I am extremely honoured to be the overall winner of the CommBeBiz Photo Competition 2017 and would like to thank the organisers and judges of the competition. As an early-career researcher, winning is a wonderful achievement and a great addition to my CV. I have presented my work in the form of posters & oral presentations at several conferences in my field, but taking part in the CommBeBiz photo competition is a perfect platform to show science to a diverse audience. I sincerely thank my supervisor Dr Ewen Mullins at Teagasc for encouraging me.” 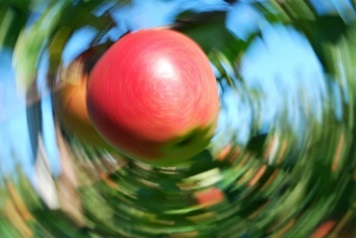 The photo selected for second place – Axis of the Fruit World – submitted by Juozas Lanauskas, Institute of Horticulture, Lithuanian Research Centre for Agriculture and Forestry, focuses on one of the most regularly consumed fruits in the world - the apple. The apple in the image is a specific apple cultivar called Ligol, known for its storage properties. It opens up the story of the research which is investigating how to optimize not only yield but also the taste of this particular variety.

“We scientists are used to sharing information in writing. But images can often have an even greater impact, especially with the general public. We become more open and more easily understood. Thank you for the opportunity to participate in the Competition and to present my photos. 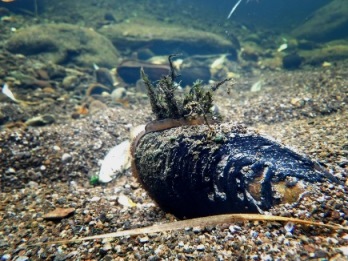 The third placed photograph - Mussel Fascinator – submitted by Karen O’Neill, KerryLIFE and Teagasc, Ireland & University of Dundee, Scotland, shows an adult freshwater pearl mussel partially buried in river gravel which two days later had moved a significant distance, an indicator that it found itself in an unsuitable habitat as mussels only move when they are under stress. Karen is researching the effects of extensive land uses on mussel habitat to help inform sustainable practice in agriculture and forestry.

“I was excited to hear that my image of a Freshwater Pearl Mussel was chosen in 3rd place in the CommBeBiz photo competition. As mussels are not considered conventionally attractive, I have felt it is important for researchers to work to connect the public with their intrinsic beauty, as well as their role in sustainable water quality. Thanks to CommBeBiz, I feel inspired to use photography as a medium to showcase the life and conservation of this interesting species as I continue my research.”

CommBeBiz launched its photography competition for bioeconomy researchers to show how images can help them document and demonstrate the relevance and impact of their work. While publicly funded researchers have an obligation to communicate their research, explaining complex theories or methodologies effectively to those with little scientific knowledge can be a challenge. An effective photograph can capture the ‘story’ of a research project at a glance.

UK-based photographer and Competition Judge, James Goodchild, explained how he approached his evaluation of the entries: “I look first for images that are out of focus, under- or over-exposed, weak colour and so on – you look for the easy errors first. Are the main elements of the image explaining visually what the image and description portrays, have the main elements all been captured?”

The third competition Judge, Philip Lymbery, Chief Executive of Compassion in World Farming, said of the competition: “What a fascinating way for researchers to share their work and its potential impact for benefitting the bioeconomy. It has been a pleasure to judge the submitted images that have brought to life such a wide variety of research projects. “
The 2017 photo competition is sponsored by Minerva Communications UK Ltd, the lead partner in the CommBeBiz project, providing the winning prize to the value of 500 euros. The CommBeBiz photo competition is an annual event and entries for the 2018 edition will open soon.

Rhonda Smith, Co-ordinator of the CommBeBiz project and Director at Minerva Communications UK Ltd concluded: “Visual imagery is winning in terms of impact and engagement with audiences across all traditional and social media channels – even in increasing citations for peer reviewed papers. Science and scientists are missing a trick if they do not utilise the power of photography and other imagery to tell their research stories. The CommBeBiz Photo Competition provides one source of inspiration to do just that. Here at CommBeBiz we look forward to receiving many inspiring entries for the 2018 competition.”