One of Ireland’s leading experts in cattle nutrition whose work has helped identify links between nutrition and reproduction has been presented with a prestigious award to recognise his contribution to animal science.

One of Ireland’s leading experts in cattle nutrition whose work has helped identify links between nutrition and reproduction has been presented with a prestigious award to recognise his contribution to animal science.

Presented to scientists in the early to mid-point of their career who have made a significant contribution to animal science and production, Professor Kenny received the award for his work on how biological controls can affect economically important traits in beef and dairy herds.

Following a PhD in cattle nutrition and fertility at University College Dublin, his research career — first at UCD and now at Tegasc — has seen him lead several major studies looking at cattle reproduction.

He is currently leading a €1.2m DAFM-funded project looking at control of the reproductive function in beef cows and heifers, and has recently begun a €1.9m project, funded by the Science Foundation examining the control of puberty and semen quality in bulls.

Other research interests include improving feed efficiency in cattle to reduce greenhouse gas emissions, the genomic control of fertility in cattle, and producing profitable bulls which produce quality meat.

He is also a former member of the Irish Department of Agriculture, Food and Fisheries (now DAFM) National Beef Forum, where he advised the Minister of agriculture on a roadmap for the Irish beef industry.

A respected breeder of both pedigree Charolais cattle and competition-winning sheepdogs, Professor Kenny grew up on his family’s livestock farm in County Mayo, where he continues to farm in his spare time.

Presenting the award, BSAS president Richard Dewhurst said Professor Kenny had made substantial contributions to improving the profitability and productivity of beef cattle in Ireland and across the world.

Commending his work in helping to develop the next generation of scientists through mentoring students, and helping to share knowledge by regularly speaking at farming events, Prof Dewhurst added: “David’s efforts to improving our understanding of the impacts of nutrition on cattle cannot be underestimated.

“By using his practical experiences as a farmer combined with his passion for animal science, he has produced research which is both relevant and invaluable to industry.”

Accepting the award at Croke Park on Tuesday (11 April), Professor Kenny said he was honoured and humbled to be recognised by the society.

“As the award is in memory of the outstanding pioneering work in of Sir John Hammond in reproductive physiology, a subject close to my own heart, it makes it all the more significant,” he said.

“My initial love for livestock farming was fostered by my parents and grandparents, but I have many colleagues - both nationally and internationally - who I have collaborated with over the years who have helped my career.

“In particularly I’d like to acknowledge the impact my PhD supervisor Joe Sreenan had on my early career, and thank my current employer Teagasc and former employer University College Dublin for facilitating my research.”

BSAS Chief Executive Bruce Beveridge said: “David is a worthy recipient of the 45th Sir John Hammond Award, which is the highest honour BSAS can offer.”

“His wide-ranging career has placed him at the forefront of cattle nutrition, and given him the skills to translate cutting-edge, relevant science into the practical agricultural context.” 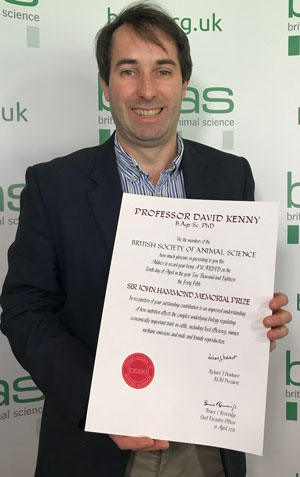