SheepNet recently held its final seminar in France with more than 100 delegates from 10 countries in attendance. It was an excellent occasion presenting an overview of the outcomes of the SheepNet programme.  SheepNet involved three years of intense interaction and sharing of ideas and solutions using a multi-actor approach within and between the 7 SheepNet countries.

All the work undertaken has been driven by the expressed needs of farmers and is available on the SheepNet website (www.sheepnet.network).

SheepNet is ending in October 2019 but the story will carry on for another three years through the new EU thematic network EuroSheep.

It is estimated that the EU sheep population has declined by 15% in the last 15 years and currently the EU is the second largest importer of sheep meat in the world. An increase in ewe productivity of 0.1 lambs reared per ewe joined across the EU would increase meat supply by 64 thousand tonnes and self-sufficiency to 92%.

SheepNet is a 3-year project funded by the European Union’s Horizon 2020 research and innovation programme. SheepNet is about practice-driven innovation to improve the productivity of meat sheep (the number of lambs reared per ewe joined) and milk sheep (the number of milking ewes per ewe joined) which will improve farmers’ income. SheepNet is an innovative thematic network which has brought together a wide range of stakeholders from the six main sheep producing countries in Europe (Ireland, France, Italy, Romania, Spain and UK) which account for approximately 80% of the EU sheep flocks, and Turkey.

After 3 years, SheepNet organised its final seminar in France!

There were more than 100 delegates from 10 countries at the SheepNet final seminar which was organised recently in France. This seminar provided the opportunity to present all SheepNet outcomes as well as the French sheep meat and dairy sectors.

During the first morning of the seminar, delegates had the choice to visit one of two farms. Half of the delegates visited Frederic Lacroix dairy sheep farm (GAEC de la remise), with 600 Lacaune ewes. Presentations at the farm included: the Lacaune breed and selection scheme; advisory services and the use of digital tools for flock management. The remaining delegates visited meat sheep farm of Bruno Alayrac (EARL Les Cabanes), which has 580 Causse du Lot ewes. Bruno Alayrac participated actively in the French Operational Group “Robustagno” which is linked to SheepNet. There were four presentations on the farm as follows: Causse du Lot breed and selection scheme; flock management during gestation; practices around lambing to reduce lamb mortality; and artificial feeding.

In the afternoon, SheepNet partners presented the outcomes of the three years project during an indoor conference held at Gramat. It was an excellent opportunity to update delegates of all the work undertaken by SheepNet which has been driven by farmer, advisor and other stakeholder needs from the 7 countries which were assembled at the start of the network. A total of 461 stakeholder questions/needs on sheep productivity have been collected and addressed with:

o   19 new research needs identified All SheepNet outcomes are available on the knowledge reservoir of the SheepNet website (www.sheepnet.network).

The seminar ended in the main ring at the Tech’Ovin sheep show held at Bellac, with a demonstration of one practical solution by a farmer and/or an advisor from each SheepNet country. The following solutions were presented:

·  Turkey: Animal capture and restrain with a rope – (http://sheepnet.network/node/169)

After concluding remarks from French sheep farmer representatives, the delegates enjoyed the remainder of the day at Tech’Ovin, while, the French delegation organised their national seminar at Tech’Ovin, to reach a wide range of stakeholders. What next?Each delegation will organise their own national seminar before the end of October. For registration, check the SheepNet website. SheepNet will end at the end October 2019. EuroSheep, the new Thematic Network on sheep nutrition and health, will follow up the SheepNet story and will have three more years of stimulating collaborations! 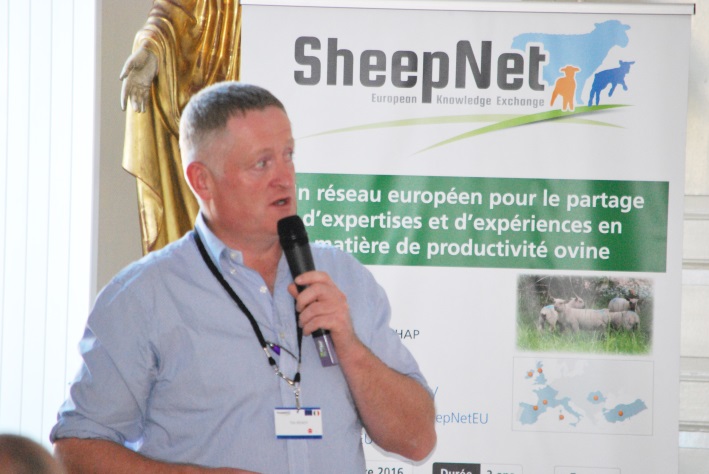