Professor Catherine Stanton has been selected as the 2020 Recipient of The American Dairy Science Association (ADSA) Distinguished Service Award. The Award will be announced at the American Dairy Science Association (ADSA) Annual Meeting, which is taking place as a virtual meeting this year, beginning today, Monday 22 June. The award is in recognition of unusually outstanding and consistent contributions to the welfare of the dairy industry and is based upon a broad contribution over her career. 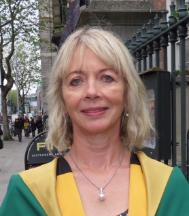 Catherine is Senior Principal Research Officer at Teagasc Moorepark Food Research Centre, founding member and Principal Investigator in the APC Microbiome Ireland and VISTAMILK SFI Research Centres and Research Professor at University College Cork.  She has published over 300 research papers and has been awarded a D.Sc. by National University of Ireland in recognition of published work (2009). Her research focusses on development of innovative dairy foods that influence human health and the developing gut microbiota in early life. She has been named a “Highly Cited Researcher” from the Web of Science group in 2017, 2018 & 2019, which recognises researchers whose citation records position them in the very highest strata of research influence and impact. She is ranked in the top 1% by citations in the field of Agricultural Science (Clarivate Analytics, 2017, 2018 and 2019). She is member of The Royal Irish Academy and previously received the “IDF Elie Mechnikoff Award”.

She graduated from University College Cork with B.Sc and M.Sc. degrees in Nutrition and Food Chemistry, and Ph.D in Biochemistry from Bournemouth University, UK. In her early career she carried out research with Johnson & Johnson UK, and was a postdoctoral fellow in Department of Medicine, Wake Forest University Medical Center NC, USA. She joined Teagasc in 1994 and is based in the food research programme in Moorepark, Fermoy, County Cork.

Congratulating Catherine on her award, Head of the Teagasc Research Directorate, Professor Frank O Mara said: “Catherine is an outstanding research scientist, who has nurtured and led a team of people in Teagasc and the APC to achieve outstanding results. Her research on the nutritional aspects of dairy foods and functional foods, particularly showing the health benefits of probiotic cultures, has been a significant contribution.”