New peer-reviewed research proves that concept of terroir is not unique to wine and cognac. Influence of soil, microclimate and topography on barley growth shown to have impact on flavour of whisky. Debate about terroir has polarised the whisky industry for decades.

A new academic study has provided conclusive proof of terroir’s influence on whisky, settling an industry-dividing debate for both whisky drinkers and producers alike.

The concept of terroir – the French principle that factors such as soil, microclimate, and topography together can influence flavour characteristics – has long been accepted in other drinks categories such as wine and cognac, but has polarised whisky experts for years.

However, a peer-reviewed paper published on 17 February in leading scientific journal Foods, spearheaded by Waterford Distillery, proves that terroir can also be found in barley, and significantly, the single malt whisky spirit distilled from it.

Each sample of barley was micro-malted and micro-distilled in laboratory conditions to produce 32 different whisky distillate samples. These were then tested by world-leading whisky lab analysts and using the very latest analytical methods of Gas chromatography–mass spectrometry–olfactometry (GC/MS-O), as well as highly trained sensory experts.

The findings of the study are significant for the whisky industry as the presence of terroir within the spirit distilled from barley creates the possibility of producing regionally specific whiskies in the same vein as wines, potentially an Appellation Controlée system of provenance.

Mark Reynier, Founder and CEO of Waterford, said: “Barley is what makes single malt whisky the most flavoursome spirit in the world. This study proves that barley’s flavours are influenced by where it is grown, meaning – like wine and cognac – whisky’s taste is terroir-driven.”

“Critics claimed any terroir effect would be destroyed by the whisky-making process, saying there is no scientific evidence to prove that terroir even exists. Well, there is now.”

Waterford, a global whisky brand based in Ireland, uses a terroir-driven approach for all its single malt whiskies, with barley from each of its 40 Irish farms harvested, stored, malted and distilled separately each year. It has produced whisky from almost 100 different terroirs as Single Farm Origin distillations since it was founded.

Waterford’s Whisky Terroir Project was undertaken by a truly international team of academics from the USA, Scotland, Greece, Belgium and Ireland, including: Prof. Kieran Kilcawley and Maria Kyraleou of Teagasc Food Research Centre, part of the Irish Department of Agriculture, Food and the Marine; Enterprise Ireland; Minch Malt; and featured cooperation from Scotland’s leading whisky laboratory.

Professor Kieran Kilcawley, Principal Research Officer at Teagasc, said: “We utilised gas chromatography olfactometry which enabled us to discern the most important volatile aroma compounds that impacted sensory perception of the new make spirit. This research not only highlights the importance of terrior, but also enhances our knowledge of key aroma compounds in whisky.”

This first step of the project explores the terroir impact via a laboratory malted and distilled spirit for complete production uniformity. The next stage – which will be published in 2022 – further explores the same role of terroir in whisky, this time using analysis based on Waterford Distillery’s own commercial spirit and matured whisky. 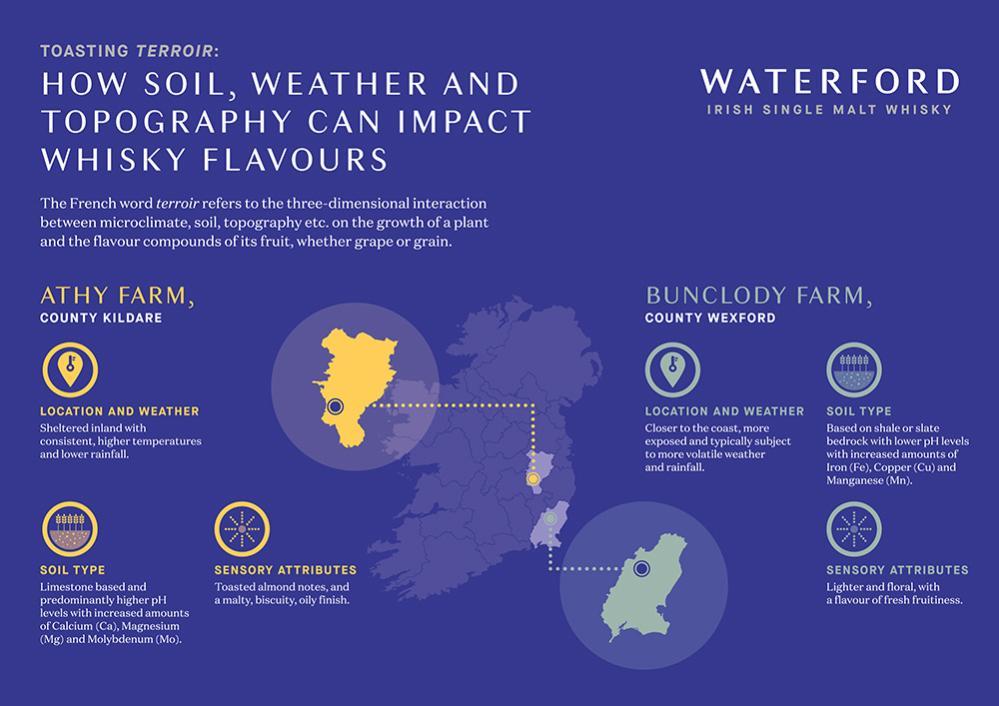