Major Online Event to mark the Publication of Developing Rural Ireland: A History of the Irish Agricultural Advisory Services

A webinar marking the landmark publication of ‘Developing Rural Ireland: A History of the Irish Agricultural Advisory Services’ by Mícheál Ó Fathartaigh took place last Thursday, 17 February 2022. It was hosted jointly by Teagasc and the Social Sciences Research Centre (SSRC) at NUI Galway and had as its central theme the transformation of rural Ireland in the twentieth century. 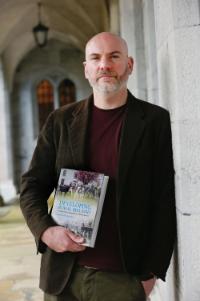 Four speakers addressed the online audience, each responding to the central theme from a different perspective.

Author Dr Mícheál Ó Fathartaigh stated: ‘With Developing Rural Ireland I have told the story of the advisory services; and, moreover, through the telling of that story, I have told a wider story: the remarkable story of rural Ireland more generally across the twentieth century. In the space of just one century, rural Ireland went from being relatively poor to relatively prosperous.’

Professor Mary E. Daly from the Royal Irish Academy and UCD looked at the transformation of rural Ireland in the twentieth century from the perspective of the Department of Agriculture, saying: ‘It had an external point of view, looking outward at a time when the Irish economy and Irish society were extremely introverted, and building networks that came into play after Ireland joined the EEC in 1973.’

Dr Peter Moser from the Archives of Rural History in Bern focused on the role of women and said: ‘The knowledge about women in Irish agriculture is inversely proportionate to the social, cultural and economic importance of the role that they played.’

Dr Declan O’Brien from the Irish Farmers’ Journal contributed: ‘The twentieth century was transformational for Irish farming and rural Ireland, and the 1950s was pivotal to this process. Although portrayed as a “stagnant” decade in terms of economic growth and innovation, developments in Irish agriculture challenge this contention. The founding of AFT, the Irish Farmers’ Journal and the national farm organisations in this decade, combined with the establishment of the co-operative livestock marts and the birth of the beef processing industry, meant that a framework was put in place which made possible the subsequent modernisation and expansion of the Irish farm and food sectors in later decades.’