Shane and John Fitzgerald, who farm near Portlaw in county Waterford, hosted a visit by His Royal Highness The Prince of Wales today, Thursday, 24 March 2022.

Shane is dairy farming in partnership with his father, John, and partner Kate, near Portlaw, County Waterford and are active participants in the Teagasc Signpost Programme – Farmers for Climate Action.  Shane puts a lot of emphasis on sustainability on the farm, in all its shapes – making a profit and a return on investment on the farm, ensuring there is a good work life balance on the farm and farming in an environmentally friendly way. 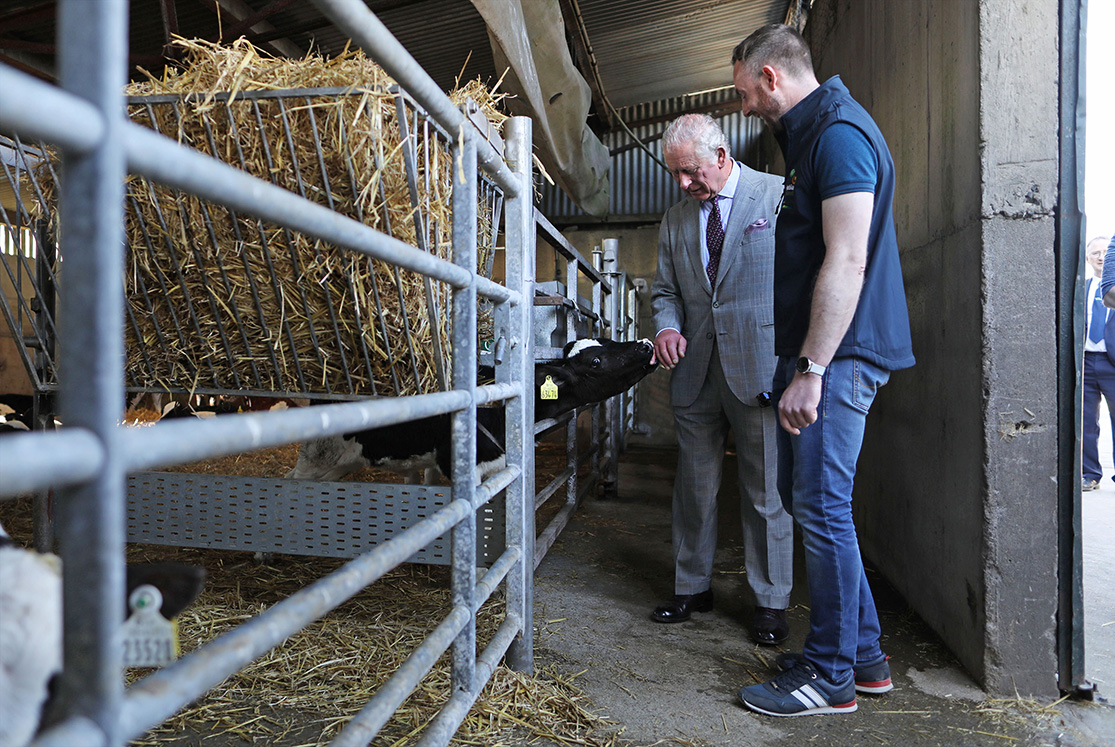 His Royal Highness The Prince of Wales and Shane Fitzgerald, host farmer pictured meeting one of the dairy calves on the farm.

Farming with the Environment

The actions being taken on the Fitzgerald family farm to reduce Greenhouse gas emissions, protect water quality in the streams and rivers and improve the biodiversity on the farm were all highlighted during the visit.

Shane is part of the Teagasc Glanbia Signpost Future Farm Programme along with 10 other dairy farmers and has embraced many of the technologies that will reduce greenhouse gas emissions on his farm, including breeding high quality animals, maximising the number of days cows are out grazing grass, using protected urea fertilizer, cutting back on the amount of artificial Nitrogen applied, using low emissions slurry spreading equipment to reduce emissions, as well improving soil fertility and growing multi species swards which include clover.  Clover takes Nitrogen out of the air and put into the ground so it is available for the grass plant.

The Signpost Programme is a national programme led by Teagasc which forms an integral part of the Food Vision 2030 strategy and supports the concept of creating a sustainable food system.

Shane is passionate about biodiversity on the farm and scores very highly in assessments of biodiversity on the farm.  Eighteen percent of the land area of the farm is deemed to be good for biodiversity.  A flock of whooper swans graze the farm every winter and spring and Shane has incorporated wild flower banks, maintained some pastures with plenty of varieties of grass, and ensures hedges are cut in a way to encourage and facilitate wildlife.  Shane believes that Irish farmers are the custodians of the land and wants to leave the farm in a better place for the next generation. 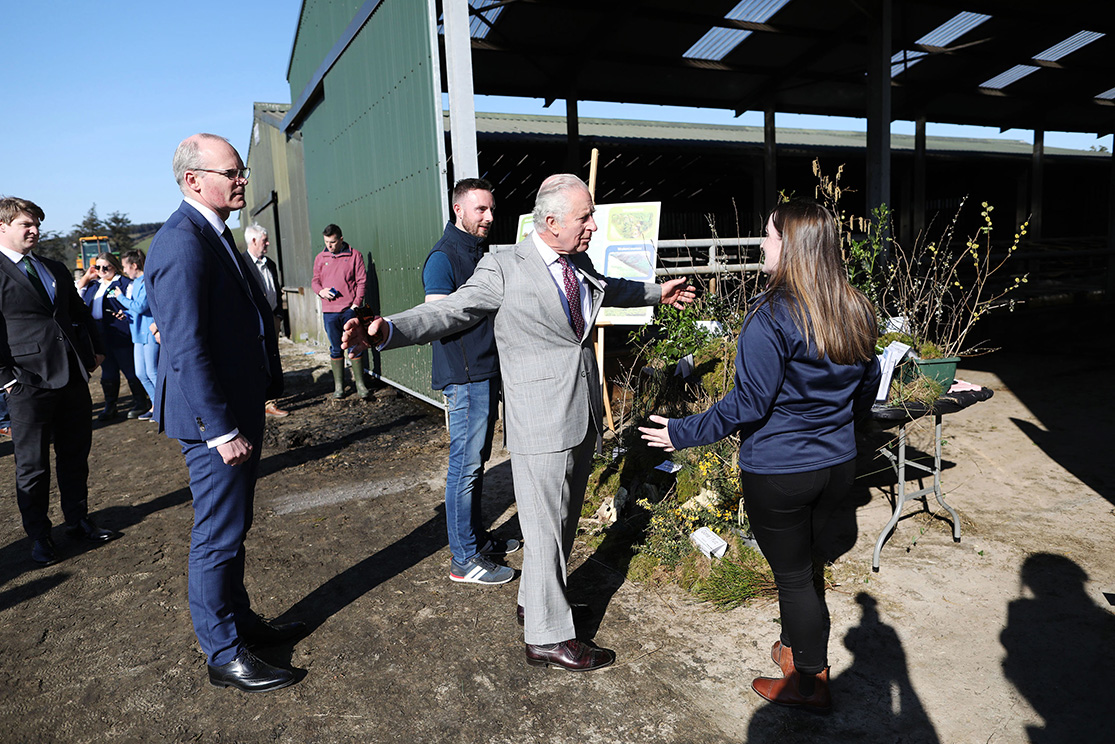 His Royal Highness The Prince of Wales; Simon Coveney TD, Minister of Foreign Affairs and Minister for Defence; and Shane Fitzgerald, host farmer pictured during a biodiversity demonstration with Aoife Leader, Teagasc.

He met key staff and farmers who are participants in the Signpost programme to hear about the changes they are making to improve the environment on their farms.  He also met young farmers from Macra Na Feirme, the young farmers organisation, to discuss the future of farming in Ireland.

A number of technologies to help farmers and the agriculture sector improve their understanding of the impact of farming activity on the environment were demonstrated.

An Eddy covariance (EC) tower, which is a state-of–the-art technique that quantifies real-time greenhouse gas fluxes and meteorological variables, was on display.  Parameters such as soil temperature and moisture, rainfall, wind speed and solar radiation are recorded with this tower.

A demonstration using drones to capture aerial images and Light Detection and Ranging (LiDAR) scans of the farm were demonstrated.  These are used to measure Biomass/Carbon Density in hedgerows.