Ammonia is not a greenhouse gas, but it can indirectly contribute to greenhouse gas emissions. Researchers at Teagasc Johnstown Castle have been examining ammonia (NH3), which is a gaseous form of nitrogen and an air pollutant. Researcher Dominika Krol gives more information

Agricultural emissions are divided into two main categories, namely greenhouse gases and air pollutants. Researchers at Teagasc Johnstown Castle have been examining ammonia (NH3), which is a gaseous form of nitrogen and an air pollutant. Ammonia comes mainly from management of animal manures (housing, slurry storage and landspreading) but also from grazing animals, and finally from spreading of synthetic fertiliser (Figure 1). 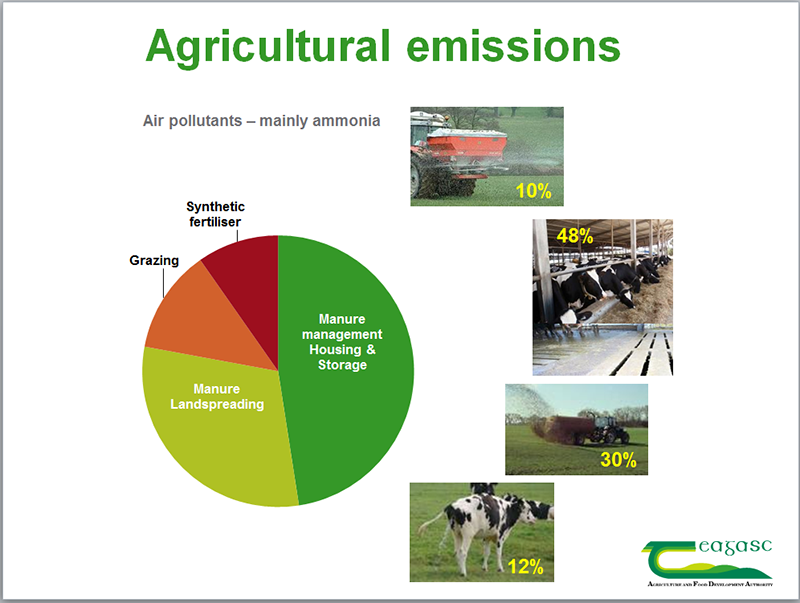 Our follow up Teagasc Daily articles will focus on some of these individual ammonia mitigation measures, so stay tuned in. For more information on ammonia emissions from agriculture, tune into the Beef Edge podcast, Episode 22 ‘Overcoming the challenges to producing sustainable Irish beef’, where Dr Dominika Krol @DominikaJKrol and Prof Sinead Waters discuss emissions in Irish agricultural sector