The castration of male cattle intended for beef production is a common practice in many countries. Castration is considered to cause a degree of pain and stress and has been shown to elicit physiological stress, inflammatory reactions, pain-associated behaviour, suppression of immune function and a reduction in performance. The nature and duration of an animal’s response to castration are dependent on a number of factors, including the method employed, the age of animals, the post-castration management, and whether or not pain relief is provided.

What are the legislative requirements aimed at ensuring humane castration of cattle?

Castration of cattle is usually performed in order to prevent sexual behaviour, reduce aggression, and increase handling safety. In Ireland cattle can be castrated, other than by a veterinary practitioner, before it attains 6 months of age using a Burdizzo or before it attains 8 days of age using a rubber ring (S.I. 127 of 2014), in both cases without the use of anaesthesia and analgesia (S.I. 107 of 2014). Over these age limits, local anaesthesia, using a prescription only medicine (POM), must be administered by a veterinary practitioner to animals intended for castration.

Why do I need to castrate animals?

What are the main methods used for castrating bulls?

Techniques used to castrate male cattle include the application of rubber rings or tightened latex bands, surgical removal of the testicles, and use of a Burdizzo instrument to crush the testicular cords.

There are two principal surgical techniques for castrating male cattle that are performed by a veterinary practitioner.

The first technique involves excision of the distal one-third of the scrotum with a scalpel or sharp castration knife, to expose the testicles by descent through the scrotal incision.

In the second technique, the lateral scrotal walls are incised with a scalpel or a Newberry knife to expose the testicles in a vertical fashion. The advantage of the Newberry knife is that both the lateral walls and the median septum are simultaneously incised, thereby enhancing wound drainage. Proper surgical hygiene must be observed during the castration procedure to avoid any unnecessary cross-contamination, infections or sepsis. Concurrent clostridial immunisation is recommended.

Burdizzo castration is based on the principle that crushing destroys the spermatic cord carrying blood to the testicles but that the skin of the scrotum remains intact. Each spermatic cord is crushed twice (second crush below the first) for 10 seconds each along the neck of the scrotum with the Burdizzo to ensure completeness of the castration procedure. The Burdizzo must be in good condition. The jaws must be parallel and close uniformly across their width so pressure will be even across the jaws. Leave the Burdizzo slightly open when not in use. With the Burdizzo technique, the testicle is left to atrophy in the scrotum, and because of the lack of open wounds the potential for haemorrhage or infection is minimised. Infection or maggot infestation seldom occurs.

Banding Castration involves the application of a specially designed elastic band with the aid of an applicator (Bander) around the neck of the scrotum, proximal to the testicles. This will cause ischaemic necrosis of the testicles, eventually leading to testicular atrophy and sloughing of the scrotum.

Tetanus has been reported in banded calves; therefore animals should receive tetanus prophylaxis to minimise the risk. Proper immunization controls tetanus risk and Tetanus toxoid (not anti-toxin) must be used. It is important to read and follow vaccine instructions carefully and to vaccinate animals at least one-month before carrying out the procedure and again administer a booster vaccine on the day of banding.

Small rubber rings are used for calves less than one month of age (rubber ring castration), and for older calves, a heavy wall latex band is used along with a grommet to securely fasten the tubing at the appropriate tension. A small rubber ring is placed around the neck of the scrotum to cut off the blood supply to the scrotum and testicles. All tissue below the ring will die and fall off.

Caution: Do not use Elastrator rings unless both testicles are present in the scrotum; thus they should not be used on cryptorchids or on calves with any abnormalities as described previously.

Is there any advantage in delaying castration of cattle?

There is a general perception among producers that delaying castration could extend the production advantages of keeping animals as bulls beyond puberty or weaning. While after puberty, bulls always grow faster than castrates, the live-weight advantage is largely lost when the bulls are ultimately castrated. A number of studies have shown no advantage in delaying castration up to 17 months of age in terms of slaughter weight or carcass weight at 22 months. 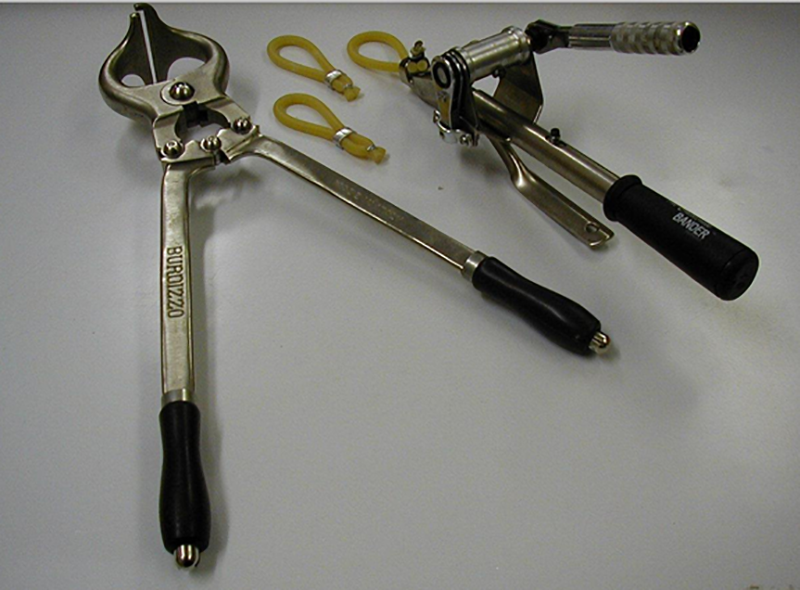 Do not try to castrate animals until you have been taught and are guided by someone experienced in the proper techniques.