Herbicides are intensively applied in Irish agriculture (both grassland and arable) to control weeds and form an essential part of good agricultural management. Johnstown Castle Environment researchers Per-Erik Mellander, Owen Fenton, Majid Khan and Fabiola Barros Costa are doing some research on the transport of these herbicides to surface and groundwater resources.

The transport of herbicides used to control weeds and form an essential part of good agricultural management to surface and groundwater resources is of growing concern throughout Europe. Understanding the fate and behaviour of herbicides following application and beyond weed control is needed for designing multi-actor and collaborative mitigation strategies and hence to maintain good water quality.

Monitoring of herbicides at catchment-scale provides valuable information for their management. The composition and concentrations of herbicides in surface and groundwater can further reflect hydrology and dominant flow paths within the catchment. WaterProtect focused on two agricultural catchments within County Wexford – Ballycanew and Castledockerell (Figure 1). The two catchments are part of Teagasc long-term Agricultural Catchments Programme (ACP, www.teagasc.ie/agcatchments) since 2009. Both catchments are intensively farmed but with different agricultural land use due to contrasting soil types and hydrogeological parameters. 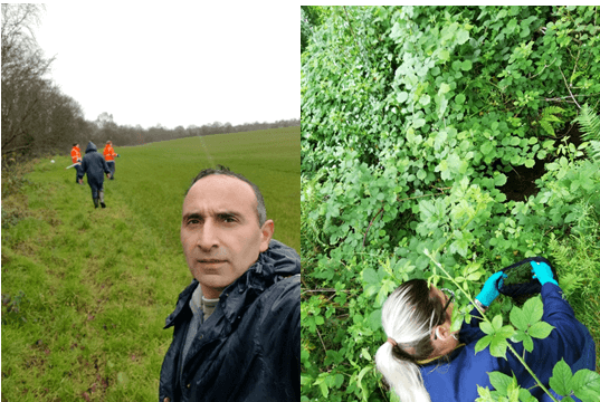 WaterProtect has monitored the concentrations of herbicides in the river outlets within these two catchments since November 2018 and the monitoring is on-going to date (Figure 2). Herbicides can be lost from soil surfaces during rainfall in water that moves across the land surface (as runoff) to streams or into groundwater (by leaching). The transport of herbicides was controlled by factors that operate in combination at a catchment-scale. Herbicides losses to water were source limited and strongly influenced by the hydrological conditions (rainfall patterns, antecedent soil water content and depth of water table).

Figure 2: Monitoring sites at the river outlets of Ballycanew and Castledockerell catchments

For example, during winter the losses were mainly from legacy stores (build-up in soils over time due to restricted degradation under anaerobic conditions) and mobilised due to high rainfall and wet soils generating high flow in the streams. Under these conditions, concentrations of individual herbicides in the streams were low due to dilution but the high flows generated relatively high mass loads. In contrast, during summer herbicide losses were associated to the timing of application causing high concentrations in surface water due to less dilution in low flow conditions and occasionally causing concentrations exceeding the EU legislative limit of 0.1 µg L-1

This further highlights the importance of the physical settings of the two catchments, where contrasting flow controls on hydrological flow-paths were instrumental in controlling such losses. For example, quick surface runoff dominated in the Ballycanew catchment due to its poorly drained soils. This resulted in larger fluxes of herbicides in stream water, especially when there was heavy rainfall soon after application. Incidental losses in summer caused elevated concentrations of MCPA, Trichlorpyr, Mecoprop, Fluroxypyr, 2,4-D and Clopyralid. While in the well-drained soils of Castledockerell catchment, stream flow was mostly generated by slower subsurface pathways and drainage, and subsurface runoff and exchanges with shallow water table play an important role in the transport of herbicides. The intrinsic chemical properties of herbicides also play an important role in their transport to water. For example, the majority of acid herbicides are poorly adsorbed to soil matrix due to high water solubility and are stable to degradation under anaerobic/water saturated conditions. Such characteristics make them highly susceptible to be transported to surface waters.

A key message is to develop collaborative mitigation strategies and in doing so, it is paramount to consider risky areas and risky times for the application of herbicides (and all pesticides) to avoid both incidental losses and build-up of stores in soils.

This work was part of the WaterProtect project funded by the European Union Horizon 2020 under grant number 727450. More information can be accessed at: https://water-protect.eu/