In beef production systems, feed accounts for up to 80% of the total direct costs incurred by farmers. There is an opportunity to genomically select cattle with an enhanced compensatory growth potential. Studies from Teagasc have shown that a target average daily gain of 0.5 to 0.6 kg for steers and heifers during the dietary restriction period is sufficient to give an optimal compensatory growth response.

In beef production systems, feed accounts for up to 80% of the total direct costs incurred by farmers. Therefore any method to reduce these costs, without impacting on overall animal performance, would positively influence farm profitability. Compensatory growth is a naturally occurring process, whereby cattle have the potential following a period of under-nutrition or dietary restriction, to undergo accelerated growth and enhanced feed efficiency when subsequently offered unrestricted access to high quality feed. Compensatory growth can be exploited by keeping feed costs low during the expensive winter months through a reduction in the energy of feed offered and exploit compensatory or ‘catch-up’ growth at pasture during the following grazing season. This practice of ‘storing’ cattle over winter, prior to turn-out to pasture in spring, has been practiced for generations in Ireland, however there is clear variation in the growth response between individual animals; suggesting that this process is genetically controlled.

A number of factors influence a successful compensatory growth response. Some of the most important factors are related to the duration and severity of the period of under-nutrition and the nature of the diet offered to cattle during under-nutrition and subsequent re-feeding. However, there are currently no breeding values or heritability figures associated with the trait. Current on-going research is aimed at identifying and validating robust DNA-based biomarkers associated with beef cattle that have greater compensatory growth potential. Potential genetic biomarkers important to compensatory growth are also being identified and validated through a large on-farm study, concluding with a genome wide association study. As part of that study consecutive weighing and determining of average daily gains during a dietary restriction period and then also during the re-feeding compensatory growth period and DNA profiles from bulls and steers have been recorded. As expected there was large variability in compensatory growth response across animals as well as across individual herds.

The results from this study will facilitate the identification of a panel of genetic biomarkers associated with an enhanced compensatory growth response. The panel of genetic biomarkers will be retained on the International Dairy Beef Genotyping SNP-chip and implemented in future breeding program strategies. This will facilitate the selection and propagation of genetically superior, animals which would aid Irish beef farmers to identify cattle that can undergo enhanced compensatory growth and thus ultimately improve profitability in beef production systems. 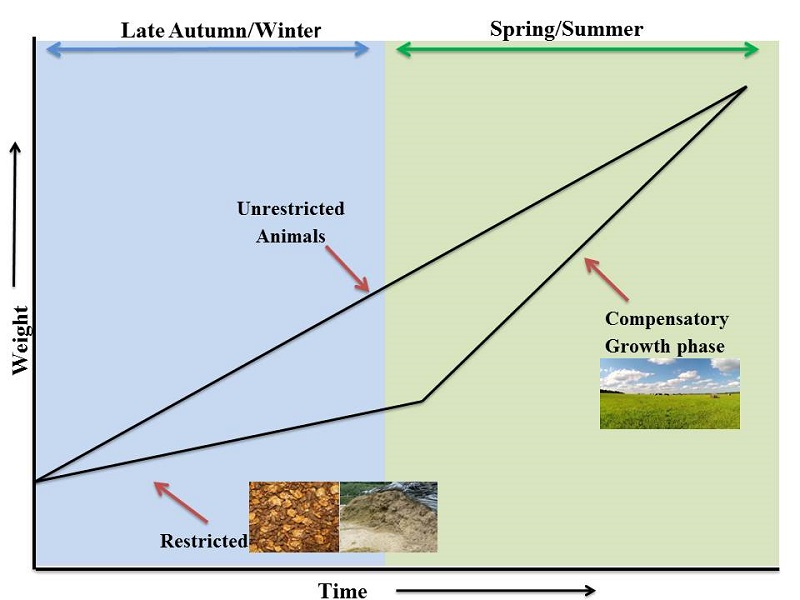