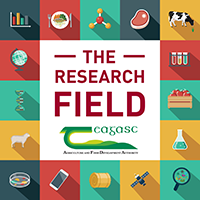 Getting more from milk

In this edition of the research podcast Teagasc research geneticist Sinead Mc Parland tells us how genetics can provide Ireland with the means to reduce the emissions from, and increase the productivity of, our national dairy herd.

Half of our dairy farmers milk record regularly across lactation to quantify the quality of the milk produced by individual cows in the herd and to identify which animals to retain and breed from. Milk samples, which are taken during routine milking, are sent for analysis to a local laboratory.

At the laboratory, samples are put through a mid-infrared spectrometer, whereby light is shone through the milk sample at over 1,000 wavelengths. The absorbance of light through the milk at each wavelength is used to determine how much fat, protein and lactose is in the milk. However, it is now known that the spectrum generated by this method can tell us a lot more about both the sample of milk as well as of the cow that produced it.

Cows naturally emit methane as part of their digestive process, and it is known that some animals emit more than others, even when fed the same diet. Furthermore, it is known that two animals grazing the same paddock can produce different quantities and qualities of milk, that is, some are more efficient than others at converting dietary energy into milk. Therefore, some differences in animal efficiency and emissions observed are attributable to the animal’s genetics. These days we are all mindful of improving efficiency and of reducing emissions however we can, yet identifying the most efficient, or lowest emitting animals in our herds is difficult. The process of monitoring both dietary intake and methane emissions is both equipment and labour intensive and generally suited only to research environments. However, to make gains in either trait through genetic selection, information on a wider range of animals across the national herd is desirable.

Research has shown that the mid-infrared spectrum, generated every time a milk sample is analysed for its composition is a good indicator of both the dietary energy consumed by the cow as well as the level of emissions produced by the cow. Researchers at Teagasc Moorepark are currently collecting data to verify this. One advantage of using infrared spectroscopy to collect data is that it is already routinely applied to half of the national dairy herd, as well as all bulk samples collected. Furthermore, equations developed using this method can be applied to historic as well as current data to generate potentially millions of records of both efficiency - as well as methane predictions - from a large portion of the national herd over time.

Listen to the interview with Sinead McParland in The Research Field podcast.