Protected urea is a well-known technology within synthetic fertiliser industry. Recent Teagasc research in Johnstown Castle shows that the use of protected urea formulations is an important option for optimising yield while reducing N2O and NH3 emissions. Researcher Dominika Krol gives more information.

Nitrogen (N) fertilisation is a cornerstone of modern agricultural production, however it is also linked to negative impacts on the environment through nitrate leaching and gaseous emissions. These gaseous losses are predominantly of nitrous oxide (N2O), a potent greenhouse gas (GHG), and ammonia (NH3), a known air pollutant and an indirect source of N2O (this happens when emitted NH3 settles on soil and causes further N2O emissions). One way of reducing these losses is the use of enhanced efficiency fertilisers containing urease and/or nitrification inhibitors. Urease inhibitors are compounds that delay the breakdown of urea into plant-available N forms in fertiliser, so that large losses to the environment can be avoided and N supply better matched with plant demand. Currently, the focus on Irish market is on enhanced efficiency products containing such urease inhibitors and these fertilisers are referred to as ‘protected urea’. Well known urease inhibitors are called NBPT, NPPT and 2-NPT.

Results of this research programme led to inclusion of these fertilisers as mitigation options for both NH3 and N2O emissions on a national level see:

Most recently, we carried out experiments comparing urea, CAN, urea + NBPT and urea + NBPT + NPPT in grassland. This study took a system-wide approach quantifying both agronomic responses and gaseous N losses to evaluate the efficacy of protected urea fertiliser formulations. Therefore, we measured emissions of N2O and NH3 ad well as dry matter yield and N uptake. Protected urea fertilisers significantly lowered N2O emissions by 66-69% in comparison to CAN, most likely as a result of lower levels of soil nitrate following fertilisation events. In fact, N2O from urea-based fertilisers were not significantly different to those of control receiving no N fertiliser. Ammonia loss from urea fertiliser was high at over 40% in conditions favourable to this type of gaseous loss, however addition of the urease inhibitors into the fertiliser formulation significantly reduced NH3 by approximately 67%. Importantly, both yield and N uptake were observed to be the same CAN, urea + NBPT and urea + NBPT + NPPT. This is most likely because of lower NH3 losses, which are often so large they can affect agronomic response of the system. Therefore, the overall impact on agricultural production in our recent study based on grassland again shows that use of protected urea formulations is an important option for optimising yield while reducing N2O and NH3 emissions. 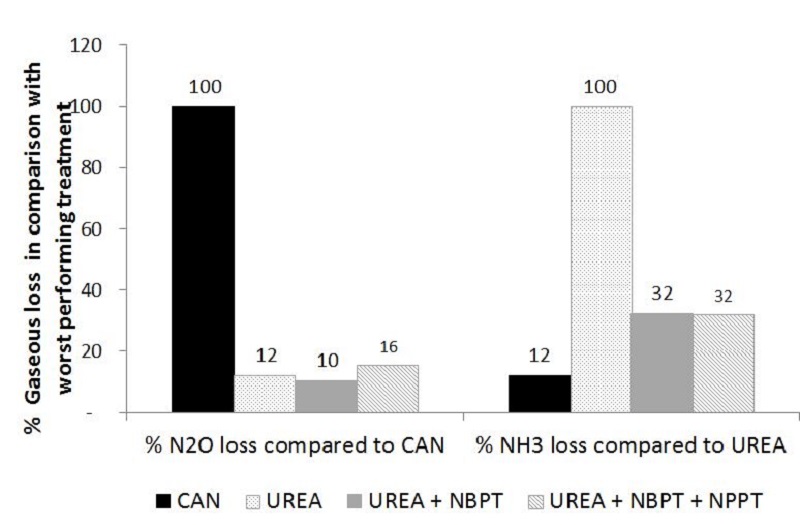