TEAGASC research aims to comprehend the influence of ingredient and process manipulations on the sensory quality of bakery products. Emer C. Garvey. and Kieran Kilcawley give more information 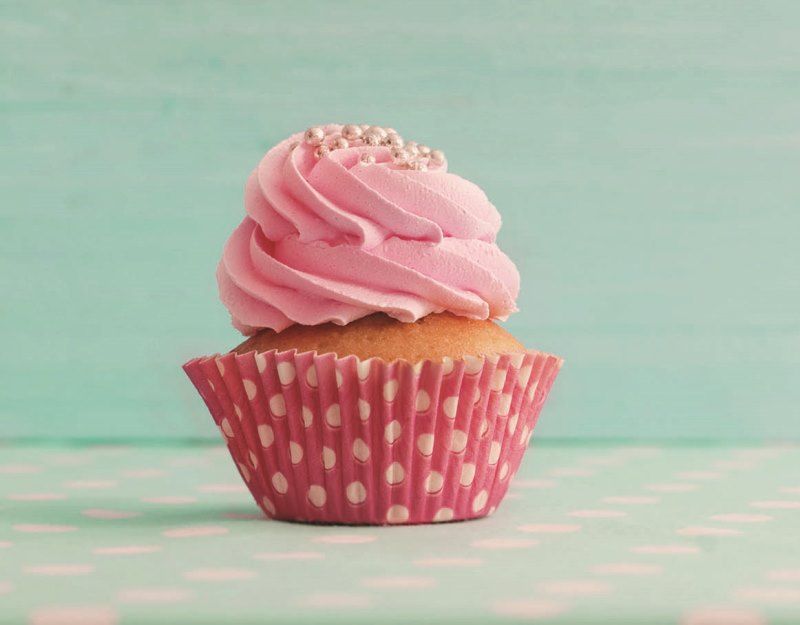 Baked confectionery products (cakes, biscuits, etc.) are highly appreciated by consumers across all populations. Ingredients such as sugar (sucrose) and fat (conventional butter/margarines) contribute to the desired aroma and flavour, and therefore drive consumer liking. However, excess sucrose consumption is a major contributor to the prevalence of obesity and type II diabetes worldwide (Hashem et al., 2016). This has led to the demand and market for more nutritious and sustainable options. Volatile organic compounds (VOCs) are responsible for the characteristic aroma of baked confectionery products; therefore, in order to produce healthier confectionery products that retain their sensory appeal to consumers, it is important to understand the formation of these compounds.

Trends of sucrose reduction/replacement have consisted of incorporating artificial sweeteners and/or sugar alcohols (polyols) due to their ability to mimic sucrose in terms of functionality and sweetness. However, current trends have shifted towards a more ‘clean’ mechanism of sucrose reduction, with consumers having high regard for the use of food by-products and functional ingredients.

Sensory analysis of the ‘clean label’ reduced sucrose sponge cakes, by 30 consumers, identified some prominent differences between the formulas, with APP and OLIGO differentiating most from the control (SC100) (Figure 1). In terms of liking and acceptability, APP was ranked lowest for colour, flavour, texture, aroma and overall acceptability. APP was perceived to be significantly darker in colour for crust and crumb compared to all other formulas, due to the inherent reddish/brown hue of the raw material, but also explained by the higher levels of simple sugars (monosaccharides and disaccharides) (Milner et al., 2020) present in the APP ingredient, which accelerate browning reactions such as Maillard reaction and caramelisation. Similarly, APP and OLIGO were perceived to have a stronger ‘nutty’ and ‘roasty’ odour compared to the control, and APP had the strongest ‘off flavour’. The control was perceived as the sweetest and associated with the strongest ‘fresh cake’ odour. 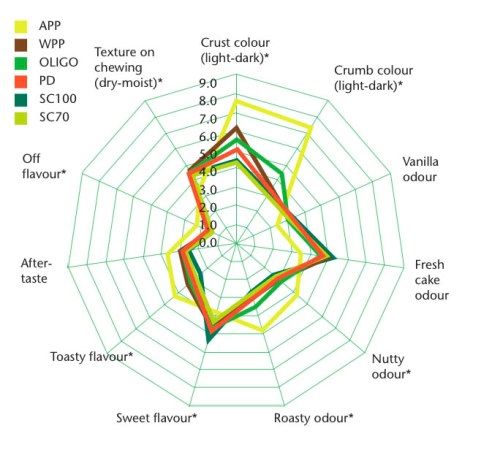 Gas chromatography-olfactometry (GCO) is an analytical technique that allows assessors to evaluate the VOCs in a product that are contributing to the overall aroma. GCO was used to investigate volatile compounds responsible for differences in sensory quality of the sponge cake formulas SC100, APP and OLIGO (Figure 2). It is apparent that the compositional changes are influencing the contribution of specific aromatic compounds to the overall aroma, and thus sensory perception, of the final product. For instance, the control cake SC100 demonstrated higher amounts of: ‘fatty/cake crust’ (heptanal), a compound originating from the fat proportion of the sponge cake; ‘bready/caramel’ (furfural); and, ‘cake crust/nutty’ (2,5-dimethylpyrazine) compounds originating from caramelisation/Maillard reaction. Although APP and OLIGO had similar levels of ‘bready/caramel’ (furfural), both formulas showed lower levels of ‘fatty/cake crust’ (heptanal) and increased levels of ‘potato-like’ methional, contributing to the overall aroma of these formulas. These differences in aroma profiles could potentially explain the reason for the higher ‘roasty’, ‘nutty’ aroma impression in the APP and OLIGO sponge cakes, as well as the low liking score for APP. In addition, the lower scores for ‘fresh cake odour’ could be explained by the lower amounts of ‘fatty/cake crust’ heptanal.

The practical findings of this research outline the importance of understanding the volatile compounds responsible for the desirable aroma and flavour of baked confectionery products. Knowledge of their generation pathway can lead to informed application of ingredients capable of reproducing similar sensory profiles to traditional formulas, and aid in a novel approach to sucrose and fat replacement.

Funded by the Department of Agriculture, Food and the Marine, through the Food Institutional Research Measure (FIRM), Project 14 F 812 (Development of consumer-optimised low carbohydrate Irish confectionary products). This work was carried out under the supervision of UCC supervisors Maurice O’Sullivan and Joe Kerry.