This project was a collaboration between Teagasc & University of Limerick. It investigated the effects of nutrition & management on gilt welfare & performance. Improving rearing conditions for replacement gilts should improve their welfare & increase their output.

In Ireland replacement gilts are reared with pigs destined for slaughter, which means they are exposed to the sexual & aggressive behaviour performed by entire male pigs. This is associated with stress & injury. Furthermore, finisher pig diets do not meet the needs of growing gilts, particularly with regard to the minerals needed to optimise limb development. Thus poor rearing can lead to impaired lifetime performance & early culling. To address this, we investigated how gilt rearing strategies affect current & long term welfare & performance. 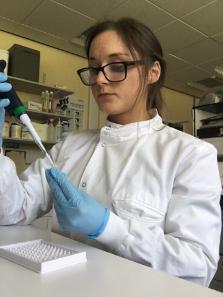 Osteochondrosis (OC) is an irregularity that causes abnormalities in the cartilage at the end of bones. It is painful, & associated with lameness & early culling of sows, but difficult to detect in its early stages. Thus blood biomarkers could help identify gilts which are at risk & should not enter the breeding herd. We compared markers for cartilage synthesis (CPII) & degradation (C2C), relative to gilt locomotion score & cartilage damage. We found that as the CPII:C2C ratio increased, so did the number of cartilage lesions. In fact, in gilts reared with males, the ratio tended to be higher than in gilts reared in female only groups. This is likely because rearing with males causes more cartilage damage (see Study 4).

Numerically, C2C increased, CPII decreased, & C2C:CPII decreased as locomotory ability  worsened. These results are promising in identification of markers of susceptibility to development of OC.

This experiment investigated the effect of group composition (single (SS) or mixed sex (MS)), with or without supplementary minerals (MIN- = control diet; MIN+= control + Cu, Zn & Mn) during rearing on locomotory ability, cartilage condition & areal bone mineral density (aBMD) of breeding age gilts. Across the four treatments, 102 gilts were culled at breeding age & the front right limb removed. Areal bone mineral density (aBMD) was measured using dual energy X-ray absorptiometry, after which the limb was dissected to score the condition of the cartilage. The number of areas of thin cartilage, invaginations, & overgrowth was counted, as was the number of areas where the cartilage had completely separated from the bone (OC; see pictures). Gilts on the MIN+ diet had increased aBMD in the humerus compared to the MIN- diet. Indeed overall, aBMD was highest in the MIN+ gilts which were also reared in female only groups.

A) (i) Thinning, (ii) Invagination and (iii) overgrowth of cartilage B) Osteochondrosis (separation from bone).

Rearing gilts in female-only groups also reduced the number of minor cartilage lesions, as did the addition of minerals. The minerals also tended to reduce the amount of separation from the bone; all gilts which had more than one area of OC had been fed the MIN- diet. Thus both rearing gilts separately to males, as well as supplementing with CU, ZN & Mn, improved aBMD & cartilage condition.

Finally, we carried out some tests of reactivity of piglets born from gilts in each treatment. Piglets from MIN+ gilts, & gilts reared in single sex groups showed behaviour consistent with less fear response. Thus the benefits of good gilt rearing strategies could have benefits for piglet welfare, as well as sow welfare.