Questions and Answers with Organic Farmers Ross and Amy Jackson

Ross and Amy Jackson are farming organically in Lacka, Carrig, Co Tipperary. A farm walk was due to take place on their farm. Organic Specialist Elaine Leavy got an update from Ross and Amy. 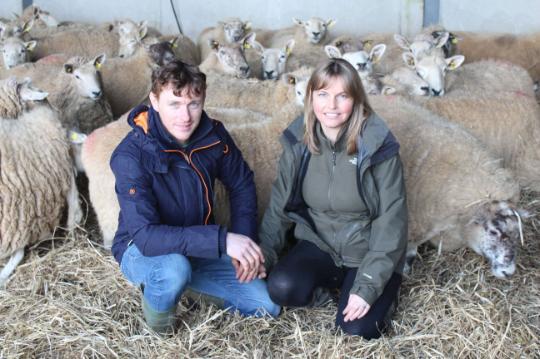 What were the plans when you both started farming organically?

The plans were to change the farm from an intensive tillage enterprise to a more sustainable lower input mixed farm, producing organic oats, malting barley, lamb and beef. Our main aim was to supply the organic cereal market. We needed to incorporate grassland/red-clover into the rotation to build soil fertility and to reduce the annual tillage weed burden, so this led us to the decision to establish a sheep flock and buy in store cattle for finishing. Pretty early on in our organic conversion period we decided not to over-winter cattle because it was taking up too much land for silage production - this then freed up more land to sow organic oats and barley.

What cereals are being grown on the farm this year?

The cereals being grown on the farm this year are organic oats on contract for Flahavan's organic porridge and organic malting barley also on contract which will be made into organic whisky by Waterford Distillery.

What are your experiences of growing organic cereals?

There's an old saying "well sown is half grown" - in organic you can pretty much say " well sown is grown" because it's all down to the preparation of the ground before sowing, and the ground conditions at the time of sowing - after that, we believe there's very little you can do to help the crop. The crops need a good supply of nutrients, either farm yard manure or slurry, and that's part of the soil preparation. There seems to be lower disease levels in organic cereals - which may be due to lower nitrogen levels, more beneficial fungi on the crop, better soil health and a less dense crop. The crop rotation is very important for controlling tillage weeds - we only grow a tillage crop in any one field for a maximum of 3 years, after that the field goes back into grassland (which could be grass, herbal ley, or silage mix), so there is a bit of planning involved to be able to maximise the tillage area, whilst achieving the desired rotation, and at the same time providing enough fields to keep healthy livestock. We had a problem with Sterile Brome in one field before we went into organic, but when that field went back into grassland it was controlled with repeated topping and now seems to have virtually disappeared from the field - so topping is important too, to prevent undesirable plants from seeding (especially thistles). 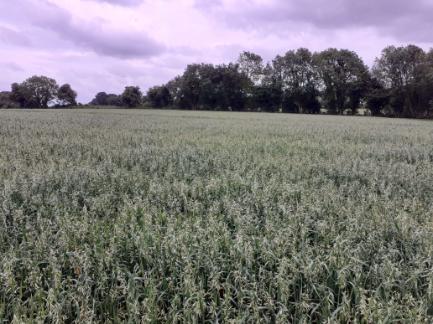 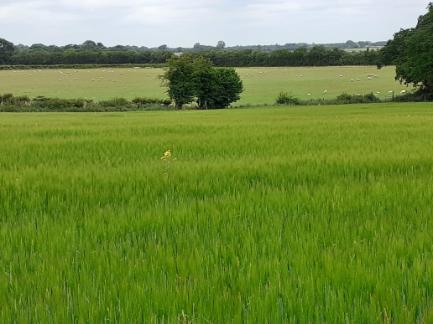 There are now sheep on the farm where did that interest come from and how has this enterprise developed?

The opportunity to keep sheep arose when the decision was made to enter into organic, because all of a sudden we would have grass to graze. The tillage and cattle enterprises are very much "Ross's thing" and the sheep very much "Amy's thing" and this works well for us as it keeps things fresh, we each have our own responsibilities, and the combination has brought us much closer together in terms of our farming interests. Amy has found her way onto sheep farms since her childhood - initially helping out at lambing time but then to helping out all year round for a number of years, until she moved from Northumberland to Ireland. So when I suggested we go into organic, and asked would Amy like to keep "a handful" of sheep, she jumped at the chance. She says it’s been quite a learning curve since helping out on someone else's farm is very different to suddenly being entirely responsible for the sheep and the decisions that have to be made regarding their ongoing health and welfare.

The sheep enterprise started in 2015 when we bought 120 ewe lambs from 3 different organic farms plus a Border Leicester ram from a breeder in Co. Cork, and 2 Charollais rams from Co. Wicklow.

Since 2015 we have carefully selected the best performing ewes for breeding with the Border Leicester ram to produce replacement ewes, with the remaining ewes being bred to the Charollais rams. We are able to breed carefully and based on performance since we keep detailed records of each individual ewe.

What are the future plans for the farm?

The future plans of the farm will be led by what the market demands. We intend on continuing to supply Flahavan's and Waterford Distillery for the foreseeable future. The main market for our lamb is to Irish Country Meats in Camolin through the Offaly Quality Lamb Producers Group. Ever since we started farming sheep we have kept a few for the freezer, and we recently decided to open this up - with the launch of Lacka Organic Lamb - so that we can sell lamb directly to the public via a box scheme. We are open minded farmers and we like to try out new ideas, and whilst we may introduce new crops or new livestock we don't see ourselves moving away from organic.

For information on organic farming go to www.teagasc.ie/organics