Soil is no longer considered only the media for food production. It is also a resource for a range of ecosystem services including nutrient cycling; carbon sequestration and climate regulation; water purification; and a habitat for biodiversity. Researchers Giulia Bondi and Lilian OSullivan give us more information

Soil is a precious resource that supports the production of food, feed and fibre that underpins agricultural enterprises. Achieving high 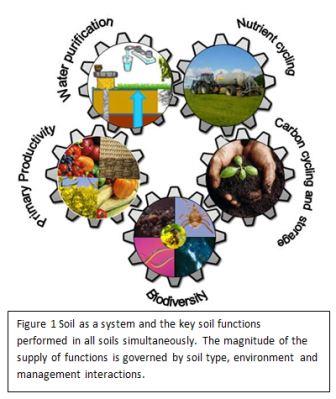 productivity is the main priority of agricultural systems. Primary production is underpinned by the capacity of the soil to produce plant biomass that forms the basis of human life. In Ireland, of the 6.9 million hectares ~65% is used for agriculture, the majority (~90%) being devoted to grass (silage, hay and pasture). Crops, including horticulture are produced on ~9% of  agricultural land, the main ones being winter wheat, winter barley, winter oats, spring wheat, spring barley, spring oats, oilseed rape, spring beans and potatoes.  Agricultural systems mainly focus on achieving high yields to meet the growing global demand for food security. However soil is no longer considered only the media for food production but is also recognised as a resource for the provision of a range of ecosystem services including nutrient cycling; carbon sequestration and climate regulation; water purification; and, as a habitat for biodiversity (figure 1).

What is the challenge?

At its simplest, soils in Ireland are highly variable and while the soil types and environment occurring on your farm are fixed, management represents an opportunity to optimise your system within the naturally occurring range of capacity. Different soils have variable capacity to produce grass and crops and to deliver these other functions due to their intrinsic physical and chemical characteristics, their biology and the climatic environment in which they occur. Soil characteristics (physical, chemical and biological) can change dramatically over relatively small spatial areas which makes nutrient management strategies very challenging at farm level. The tendency is often to apply the same fertiliser plan to fields that are perceived to have similar characteristics and similar growth performances. However, this type of blanket approach, where all fields are treated equally, does not reflect the real heterogeneity of soil characteristics and qualities.

Figure 2 shows the 11 Great Soil Groups identified in Ireland.  Brown Earths, Brown Podzolics and Luvisols are the more intensive and productive soils and are characterised as moderately- to well-drained with good nutrient retention capacity. This makes them suitable for cropping with appropriate management. Lighter, well-drained soils while responsive to nitrogen (N) fertiliser inputs, are at greater risk for N-leaching in wetter periods. Timing of input applications is critical to minimise environmental and production losses. Wetter soils, such as Alluvials, Surface-water and Groundwater Gleys while considered less productive can release N from their organic matter reserves during periods when they are drying out or beginning to wet-up. The main risk in these soils may be the production of nitrous oxide (N2O) due to denitrification under anaerobic conditions. Phosphorus (P) fertiliser applications on poorly drained soils, due to their heavier texture are more prone to P loss as overland flow, after heavy rainfall. This simple example shows how productivity, nutrient cycling and water purification are not only interrelated but will vary greatly between soil types. 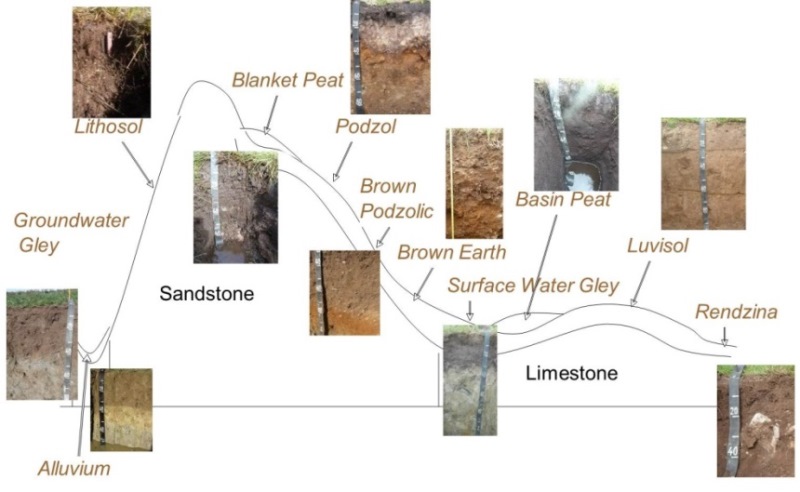 Farmers play a pivotal role in managing soil functioning by applying inorganic or/and organic fertilisers to build up or maintain the supply of nutrients required for primary productivity and to safeguard soils for future generations. While experienced farmers know that not all soils have the same production potential, others may be less aware about actual soil conditions/characteristics of each field within their own farm, and may overestimate or underestimate the nutrient application rate.  Soil testing is fundamental to any nutrient plan and represents a critical tool available to farmers to assess the fertility status of their soils. However, the attention needs to shift from a quantitative approach based only on the evaluation of chemical features to a qualitative approach that considers other factors.  Soil type and consequently, natural drainage status, has been considered critical to take into account when planning fertiliser applications on farm. Moving forward, greater incorporation of soil types, geographical position, climatic conditions and management will be required in planning to optimise soil functions for sustainable agriculture.