Something old, something new

Research funded by TEAGASC and SFI into grassland management histories has led to the discovery of a number of new archaeological sites. Researcher Robert O’Hara tells us more 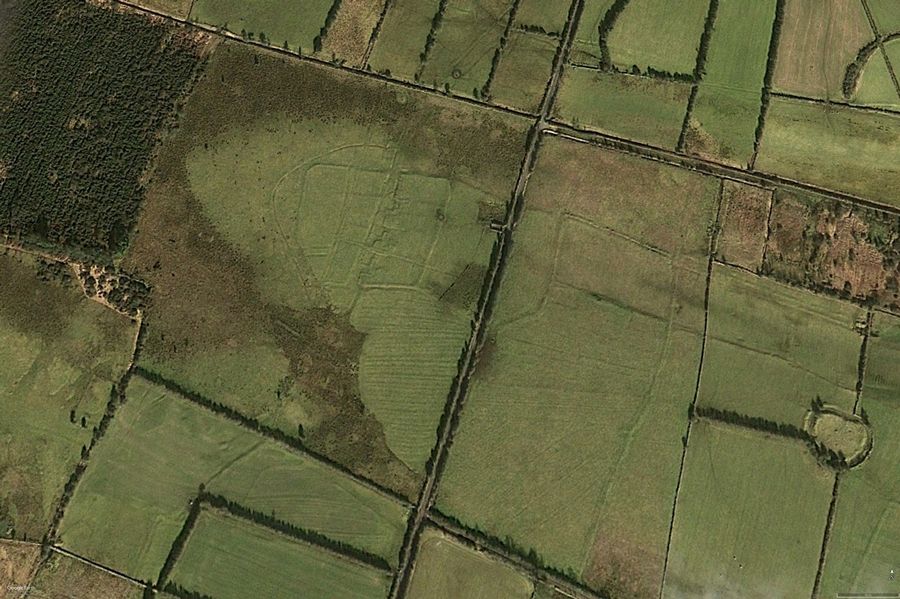 The Irish countryside is dotted with tens of thousands of ancient sites and monuments, many of which are recorded in the archives of the Archaeological Survey of Ireland (ASI). Only a small number of these are in the ownership of the State; the vast majority are on privately held farmland and survive, as they have for centuries, through the awareness and careful stewardship of farmers. There are deeply held traditions respecting ancient monuments, and agri-environment schemes like the Rural Environment Protection Scheme (REPS) and Green Low-carbon Agri-environment Scheme (GLAS) have given guidance to farmers on securing and preserving archaeological sites. Teagasc has collaborated with the ASI in the past to produce a guide for farmers to minimise damage to archaeological sites (‘Good Farming Practice and Archaeology’ – available on the Teagasc website). Nevertheless, modern farming methods can still pose a risk to unidentified sites, particularly during reseeding, hedge/scrub clearance, and land drainage.

New archaeological sites are being identified all the time through archaeological excavation, chance discoveries on farms, and by identifying new sites in online satellite imagery. Evidently, it is a golden age for new archaeological discoveries, with over 1,500 reports of new sites to the ASI during last year alone. This boom has been fuelled by online image archives, the growing use of drones, and the extensive drought conditions in 2018. Cropmarks are traces of a monument that no longer appear at the surface but may still be visible in aerial images through differential crop growth, and are particularly obvious during dry spells.

As part of an ongoing Teagasc/Science Foundation Ireland (SFI) VistaMilk project looking at grassland management histories, the Spatial Analysis Unit in Ashtown has been examining old photographic archives from Ordnance Survey Ireland (OSI) taken 15- 30 years ago (1995, 2000, 2005), as well as more recent Google Earth (GE) images from the last decade. In doing so, they have identified over a dozen ‘new’ archaeological sites, including cropmarks and standing monuments. Evidence of these sites can be ephemeral, visible only for a short time or under very specific conditions. The standing monuments all had earthworks that were best seen in winter when a low sun angle cast long shadows. The newly identified archaeological sites are a mix of burial and settlement sites, possibly from the prehistoric or medieval periods, a selection of which are described here. 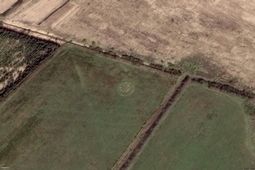 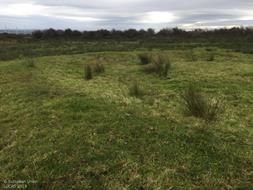 Barrows were burial sites used from the Neolithic (approximately 2,500 BC) until the Christian period (about AD 500). One such barrow was identified in Co. Kerry, where a 16 m diameter bank surrounds a low mound (which likely covers cremated or inhumed remains). This site epitomises the proper stewardship of archaeological sites, where the farmer has avoided impact during farm operations and drainage. When discoveries are reported, official confirmation must await a site visit by an ASI archaeologist. In this instance, there was ready-to-go validation in data from the EU Land Use/Cover Area frame Survey (LUCAS). LUCAS is a pan-EU field survey to collect land-use and land-cover data at selected points. Fortuitously, the barrow was located on a LUCAS point, which was visited and photographed by a LUCAS surveyor in 2018. Figures 1a and 1b show the raised curving bank and low internal mound that are characteristic of this class of site. Larger enclosed sites are broadly classified as ‘enclosures’. These are enclosed areas of various shapes and sizes that possess no other diagnostic features (Figures 2a, 2b and 2c). They can date to any period from prehistory onwards, but on excavation many are dated to the early medieval period (AD 500-1,000). 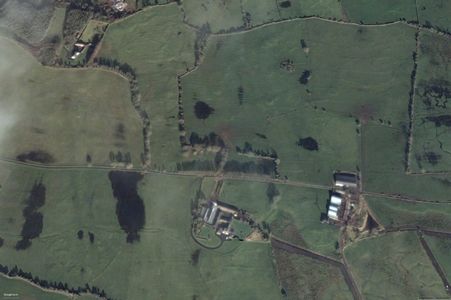 Two deserted medieval settlements were identified, which is fortuitous as Teagasc is currently supporting research into archaeological features like deserted medieval settlements and their role in agrotourism through Walsh Scholar Daniel O’Mahony (co-supervised by Tadhg O’Keefe in UCD and Stuart Green in Teagasc). There are only about 300 deserted medieval settlements known in Ireland, so finding two in one week is unusual! Many rural settlements from this period developed into our modern towns and villages. Some were abandoned due to war or disease, while others succumbed to the impact of a changing climate, soil exhaustion, or changing agricultural practices. At Kilcurly, Co. Limerick, previously unidentified earthworks were identified over several hectares adjacent to a medieval church. In Figure 3, north of the farm access road, relict field boundaries, several circular enclosures, and rectangular building foundations are visible. South of the road is a substantial oval enclosure (190 m x 150 m) with internal subdivisions and structures. Records from the 17th century associated with this church mention dwellings and structures, some of which may relate to these earthworks. A second deserted settlement was identified at Cloonastiallas, Co. Roscommon (Figure 4), where several rectangular house plots flanked a 170 m long ‘street’. Behind these house plots larger fields covered an area of approximately 14 ha. All sites have been reported to the ASI and have been added to its database of sites and monuments. ASI records are updated continuously as new sites are discovered, so landowners should inform themselves of all sites on their land before carrying out works that may damage archaeological remains. Under the National Monuments Act 1930 (amended) there are severe penalties for unlawful interference with or damage to archaeological monuments. 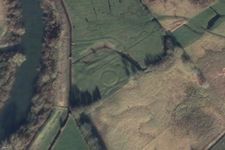 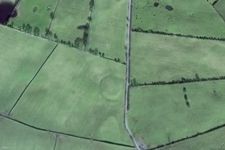 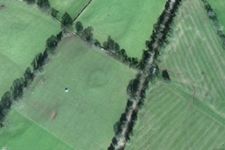 All satellite images are courtesy of Google Earth: © Google/Maxar Technologies 2020. The Kerry barrow ground image is from the Eurostat LUCAS survey. These archaeological findings arose as a result of research funded by the Teagasc and SFI VistaMilk Research Centre.