Over the month of February an average of 154mm of rain fell across the five malting barley monitor farms, which is 80mm more rain compared to the Met Eireann 30 year average rainfall figures for the same period. The result of this, and the continuation of broken weather into March, has resulted in field work this spring being extremely intermittent with only brief opportunities for ploughing to be carried out on the drier soils.

This year, depending on location, there will be three spring malting barley varieties being distributed by Boortmalt, which are Planet, Laureate and Prospect. If drilling any of these varieties, it is important that the correct seeding rate is used in order to reach the target plant population per meter squared.

To maximise spring malting barley grain yield, aim to drill 350 seeds/m2 which assuming an establishment rate of 85% should produce 300 plants/m2. By establishing 300 plants per m2, the spring barley crop will have a good opportunity of producing a large number of shoots and ears to produce a high yield. 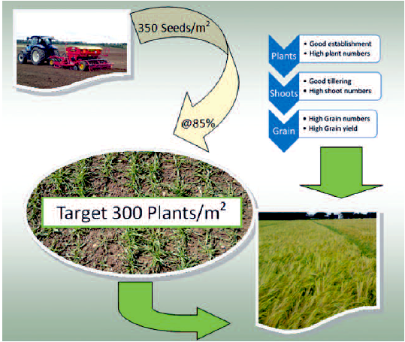 To determine the correct seeding rate to use in order to hit the 350 seeds per m2 target, we firstly need to determine the Thousand Grain Weight (TGW) of the seed. This will be displayed on the side of the seed bag. Once determined, the TGW, is combined with the target plant population for spring barley of 300 plants/m2 and percentage establishment of 85% and inputted into the formula below:

The TGW of seed this year is relatively constant among seed lots unlike last spring when there were considerable differences even among the same variety. The table below shows the average TGW for the three main malting barley varieties.

Note: While TGWs are more uniform this year, it is vital to examine the TGW on the seed bag and use the above formula as there can still be differences.

It is important to drill distilling barley early and follow this quickly with malting barley drilling. Trial work carried out in Teagasc Oak Park has shown that early drilling generally results in higher yield and lower protein however seedbed conditions must be perfect. Unlike some other crops, spring barley that is drilled into a cold wet soil will inevitably suffer a yield penalty therefore it is vital to allow the current saturated soils time to dry out fully before ploughing and drilling.